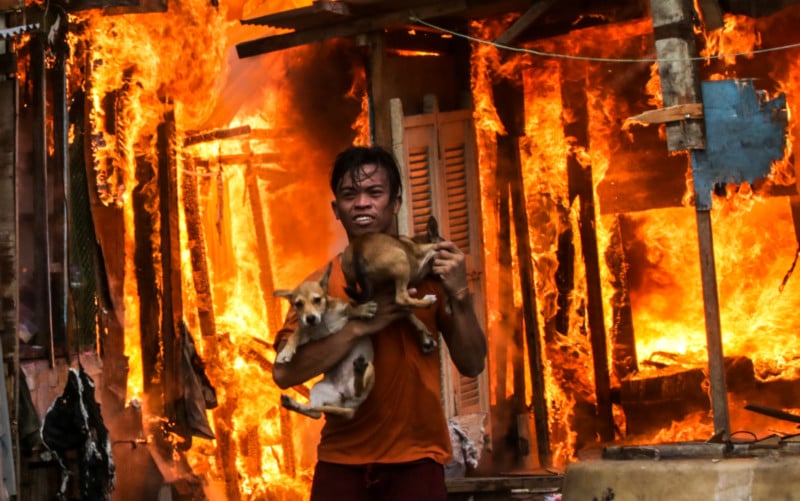 If a fire broke out, and you could only grab one thing, what would it be? For many, that question will always stay hypothetical, but for the residents of Anonas Street in Santa Mesa, Manila, on one fateful day in 2020, it suddenly became the reality that would change their lives permanently.

Right in the middle of this life-changing event, the devastating effects of the incident were made visible to the world only because of one photographer who was willing to take the risk: photojournalist Jansen Romero.

“This was taken during a huge fire that razed shanties near the port of Manila. At first, I had difficulty finding a good place to capture the fire since the place was too tight and fire victims were scrambling to salvage their belongings,” he says.

“Houses in that area were built from light materials and are very close together thus making the fire easily spread out. The fire reached task force Bravo (2nd from the highest fire alarm) leaving hundreds of families homeless.”

Despite the rush and chaos of the situation, Jansen says, as it turns out, your adrenaline in situations like these can actually guide your photography, instead of making you want to run away.

“I think I was lucky that day, because I was able to find a place with a great moment in it. Adrenaline was rushing in me, as I felt the heat of a huge fire burning the houses in my skin. But I tried to stay calm and framed this man rescuing his pets in my viewfinder,” Romero explains.

“Going inside alleyways of intertwined shanties in Manila is difficult to enter, especially in scenarios like fire. Some of the photojournalists that day, stood on footbridges near the area to get a general shot. However, that time I felt that I can tell the story with a stronger photo if I get inside the burning shanties.

“The place was damp, scrambling with firefighters and residents fleeing from the scene. In scenarios like this I feel a bit scared, but I always have this mindset that a photojournalist can’t make strong photographs if they are not connected to the community or subject.”

The image above is part of a series of daily life photos that focuses on social issues, health, economy, humanities by Romero.

Jansen has worked as a photographer for different platforms and genres: Manila Bulletin, ABSCBN news, and Rappler to name a few. He has also won honorable mention at the 29th Gawad Ustetika for the category of Sanaysay year 2013. Jansen is based in Manila and is available for assignments in Asia.

You can explore more of Jansen’s photojournalism work here.

This article provided courtesy of Scopio. Scopio is the most diverse community-based platform in the world where artists can sell their work and get hired in over 150 countries. Check out their community of 14k plus contributors and a library of over 400k authentic images.

Image credits: Header photo by Jason Romero and used with permission — A resident carries his pet dogs away from the burning houses after a fire broke out which left hundreds homeless and with no belongings.

7 Things… – It Starts With Coffee

I Can’t Stop Dreaming About the Coach Pillow Tabby 18