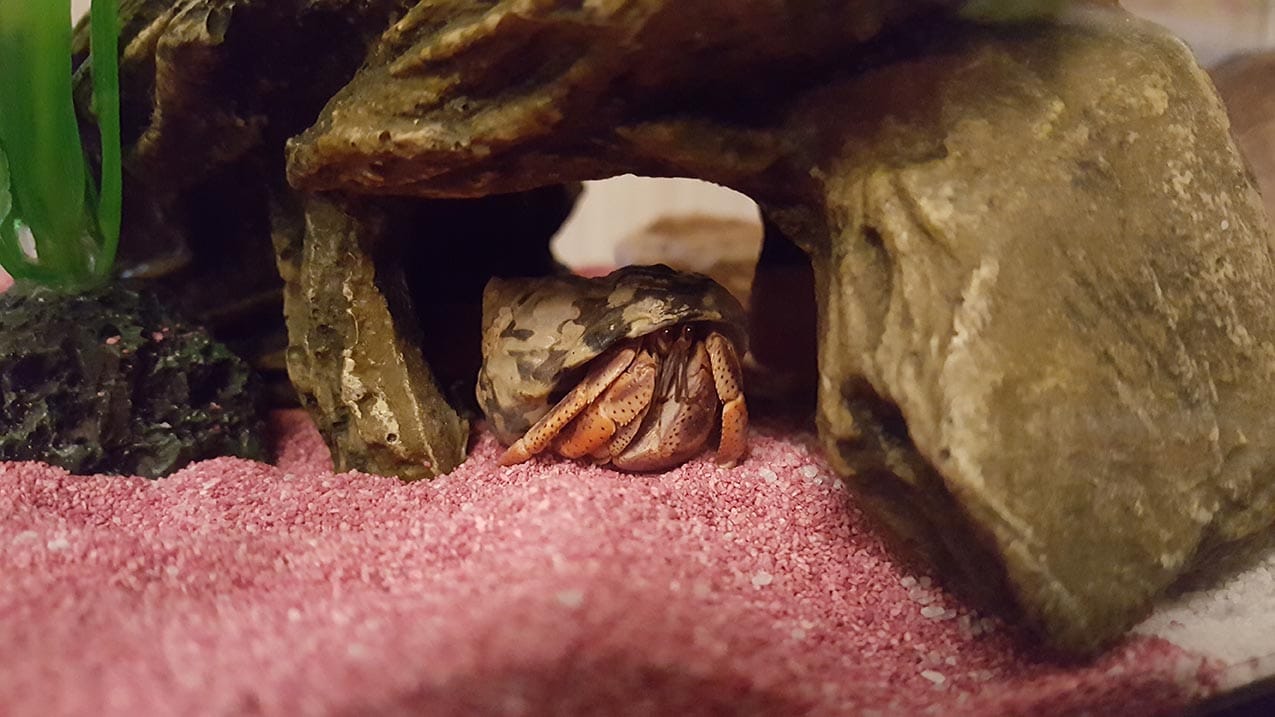 Hermit crabs are considered to be curious and amusing creatures, which is part of the reason they’re such popular pets, on top of the fact that they’re incredibly easy to care for. But when you bring your hermit crabs home and they suddenly seem inactive, you might start to get worried. Did something happen to your hermit crabs? Are they sick or just sleeping? This leads to a myriad of questions, which we hope to answer in this article.

Hermit crabs are nocturnal creatures, so they naturally sleep during the day and come out at night. This is mainly due to dehydration concerns. A crab can dry out very quickly in the hot sun, so staying inside is the best way for a crab to stay safe and hydrated. As such, crabs tend to be most active at night, rather than during daylight hours. Of course, this is probably disappointing for you, the hermit crab owner who wants to enjoy their new pet! However, if you feed your hermit crab first thing in the morning, they’re more likely to stay awake and be active.

Hermit crabs can’t sleep all day. Still, many of them might reside in their shells for the majority of the day, unless coaxed out. What they’re doing in there the rest of the time is anyone’s guess, but it’s estimated that hermit crabs actually sleep 6-8 hours, similar to humans.

Do Hermit Crabs Always Sleep In Their Shells?

A hermit crab’s shell offers it protection from various predators that would find them to be a delicious meal. But if it gets too humid in there, a hermit crab will leave the safety of the shell and bury itself in the sand. Hermit crabs get very active when it’s humid, which is why they don’t always sleep in their shells when the humidity rises high enough.

Is It OK for Hermit Crabs to Sleep in Piles?

This is normal behavior for hermit crabs. They’re incredibly social creatures, and in the wild, they live in large colonies. In these colonies, you’d see many crabs piled together sleeping, so it’s not surprising or strange to see it with domestic crab colonies either.

How Do Temperature and Humidity Affect a Hermit Crab’s Sleep?

If your hermit crab’s environment is the wrong temperature or humidity, it can cause it to spend more time sleeping and far less time being active. That’s not always the cause of such behavior, but if you see these behaviors, you’ll want to ensure that conditions in your crab habitat are ideal. Humidity should be 70% or higher. The temperature should be between 65-80 degrees Fahrenheit.

How To Wake a Sleeping Hermit Crab

If you want to wake your hermit crabs, there are several easy ways to do it.

1. Put an Active Crab Nearby

As we mentioned, hermit crabs are social creatures. If you put one active crab near another that’s sleeping, it will wake up the sleeping crab for you.

2. Place the Crab on Your Palm

Pick the crab up and place it on your outstretched palm. Its sensory antennae will feel the change in environment, waking the crab up. Careful though, the crab could pinch you out of self-defense when it exits the shell!

If the temperature in your crab’s habitat isn’t currently between 65 and 80 degrees, then do what you must to adjust it. Your crabs will be far more active in this temperature range.

Hermit crabs are nocturnal creatures, so you shouldn’t expect to see too much activity from them during the day. That said, you can entice a crab to stay awake with some food. If you want to wake your crab, it’s simple enough to give it a bath or place it on your palm. Even though hermit crabs spend most of the day inactive, they’re probably only sleeping for about 6-8 hours like us. If you think your crabs are sleeping too much, then you should make sure that their enclosure is between 65-80 degrees with a humidity level above 70% to incentivize maximum hermit crab activity.

Looking for more information on hermit crabs? See our articles on: