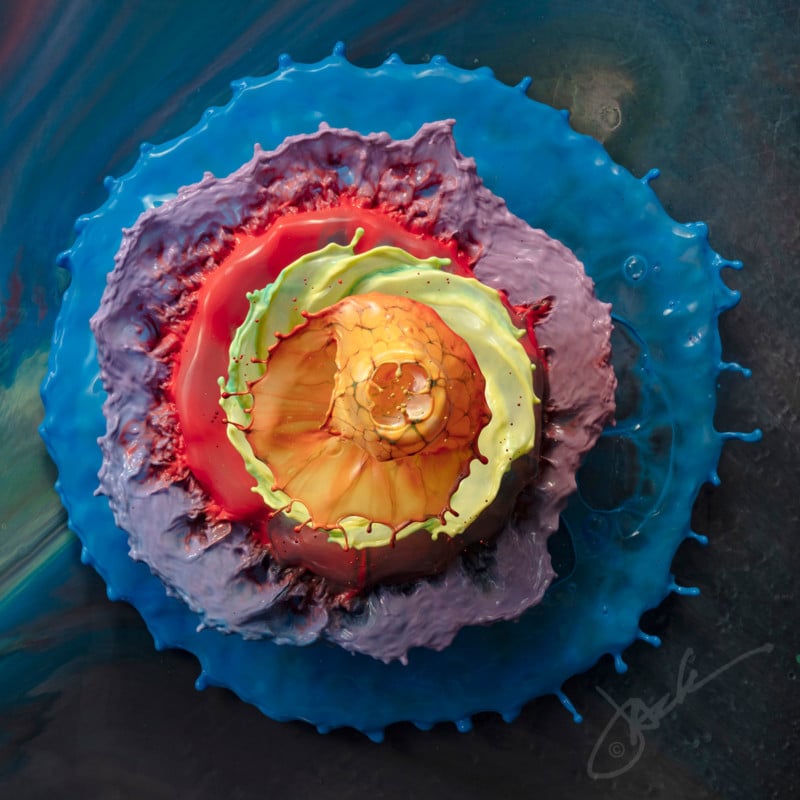 Capturing the movements of water has been a consistent and intriguing subject matter for photographer Jack Long. In his latest image series titled Mandalas, Long features spectacular fountain-like water splashes that not only captivate the eyes but highlight the artist’s unique and vibrant form of liquid art.

Through a series of high-speed, stop-action shots, Long’s images showcase the energetic nature of liquids while simultaneously showcasing his skillful use of perspective, timing, and imagination. 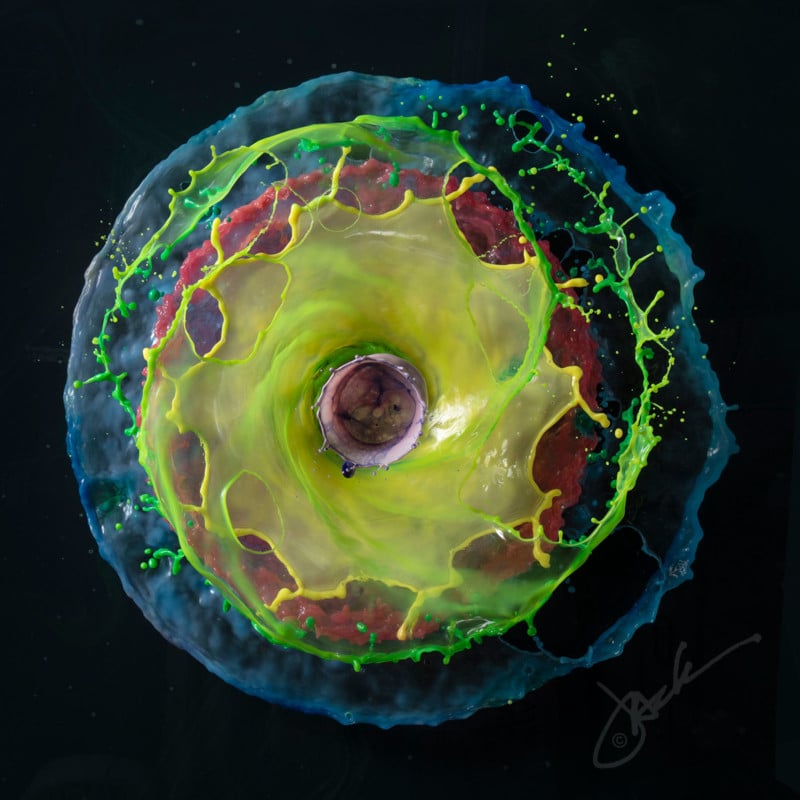 “Water. It cleanses, nourishes, and is essential to life. It also can be an intriguing subject for lens-based photographic exploration […] My primary challenge beyond the geeky stuff is to create an image that is absolutely unique,” Long says.

“While I am not the only photographer to have concentrated on liquid captures, I am confident that my contributions to the genre have left a lasting impact, even if the image-makers making derivative images today are unaware of those contributions. I like that I only have myself as competition for this narrow space and I constantly challenge myself to reach my highest level of creative expression before releasing any final results.”

For the past twelve years, Long has been focused on his exploration of water and other fluids in his work. His liquid art imagery ranges from abstract, surreal, and imaginative to fanciful displays of still life pieces such as flowers in vases or jellyfish-like blobs in an arched vibrant wave. Long’s tactics of shape manipulation also include extremely short-duration flash exposures, fluorescent colors, and distinct perspectives, all of which continue to aid the photographer in the evolution of his work. 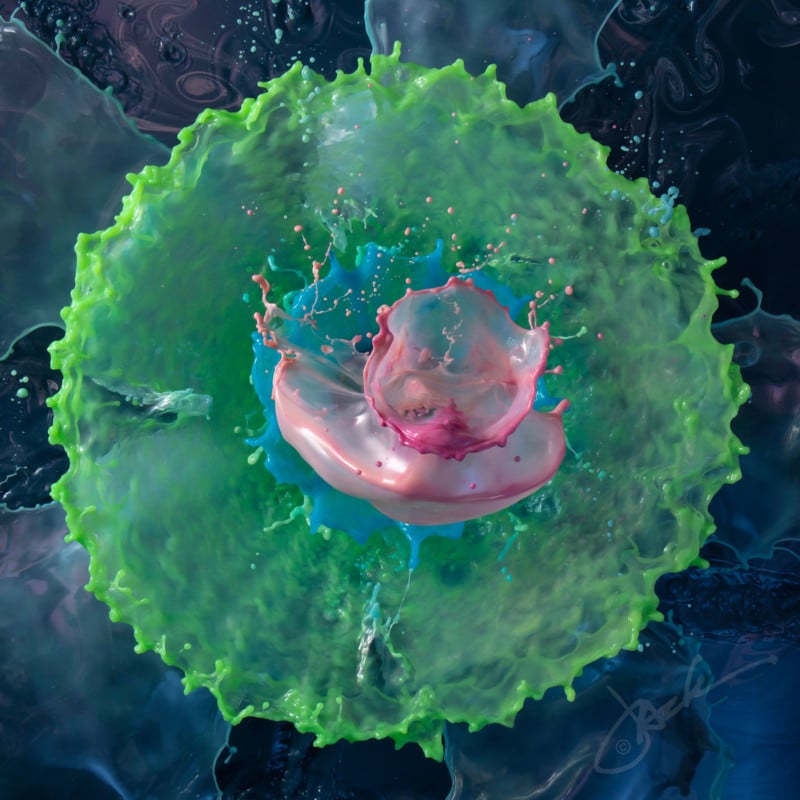 “I had been in a regional exhibition and there was a question about point of view (bird’s eye, rather than oblique). My response was that the entire set would have to be constructed to that point of view, well that got some wheels turning and the more I considered it, the more I realized that I could make it successful. There were significant challenges to my vision, and I gained a lot of new skills along the way.” Long says, speaking to PetaPixel.

Although a shoot or session is a multi-stepped process that gives varied results, it remains one that Long feels confident in as well as its final results.

“A session is generally a fully dedicated day. I must transport and prepare a lot of water for the session,” Long explains.

“Dyes, pigments, thickeners, oh my. I must test and time each stage individually and in concert. Once I have all the elements working, I can then work on the final captures of that session. If any element happens to fail or acts in an unexpected way I can either continue for more exposures or I may have to pause and repair. When we’re firing on all cylinders, I can produce a few dozen exposures before having to replenish supplies.”

When the environment and tools converge with Long’s skills, the result is memorable images of floral-like color burts and simplistic delights for the photographer. “I love when a set is truly working, the emotion comes from that dopamine surge of seeing everything working in concert. Discovering so much more within the unexpected surprises and minute details while reviewing exposures during and after a session, is a bonus,” he explains.

“Like many artists, it is indeed delightful when the work is recognized and accepted not only within the photographic community but also within the broader fine art world.”

Despite finding comfort in consistency, Long still ponders ways to improve his setup,

“The way I construct my fountains has remained significantly unchanged, however, I realized that I could improve my construction by incorporating CAD and additive manufacturing. I was able to test several designs as I learned to create within digital space,” he adds.

When it comes to equipment, Long prefers the Canon 5Ds for its high resolution, but does say he wants to branch out and dabble in other camera systems. “I do have a wish list that ventures into the medium format digital realm, but I need to stay within my means,” he says. “My flash system is the Paul C. Buff Einstien. They are very brief with significantly higher output than Speedlight style units, as well as reasonably affordable for the serious hobbyist. Beyond that my automation system is powered by Arduino.”

When asked about the kinds of images he admires and hopes to deliver to his audience, Long says he wants to make something that forces viewers to stop and look at his work for longer than the microseconds social media has crafted in the online experience.

“I like to see a higher level of craft injected into an image. Something that takes the viewer to a new and perhaps unexpected viewing experience. I like and aspire to imagery that holds a viewer’s attention for longer than the span of a finger swipe. There is so much made about intention, but I think recognizing and appreciating the artist’s intention is beneficial. I am not a huge fan of complex abstract metaphors as a crutch to justify mediocre images.” 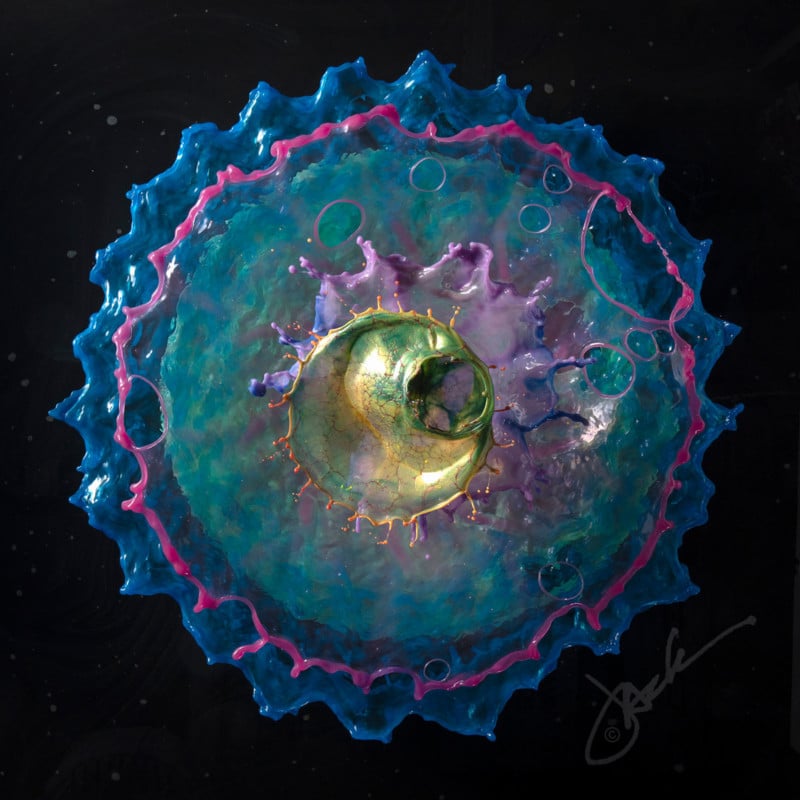 Feedback about Long’s latest series has been mixed but he sees it as a challenge that he is up for.

“The early responses have been very mixed with some surprising successes and a fair share of disappointments. When it comes to juried events, it’s challenging to please everyone,” Long says.

“I guess the goal is to try to increase the odds and to continue to strive to expand my audience as much as possible […] I do have much gratitude to friends and associates who have lent their knowledge, labor, and perspectives along the way. I appreciate everyone who has contributed to the knowledge I have gained to make this work as successful as it has been.”

As for what’s next for Long, he hopes to expand on the Mandalas series by further experimenting with shapes, but knows the next series will come to him,

“As with many ideas that rattle around in my mind, sometimes they can be a bit overwhelming. A good idea must stay with me for a while and keep gnawing at my subconscious until I decide to commit resources to it […] I am very pleased to be invited to share my work with […] the readers of PetaPixel.”

An OLED MacBook Air could launch in 2024 — skip that M2 MacBook!

RingCentral IP phones and other considerations for your temporary office

The Last of Us TV show review: Breaking the video game curse

This AI can mimic your voice with a 3-second sample — can you trust anything you hear?

Skip the gym! Pick up Nintendo’s Ring Fit Adventure for $69