How Big Do Dwarf Rabbits Get? (With Size Chart) 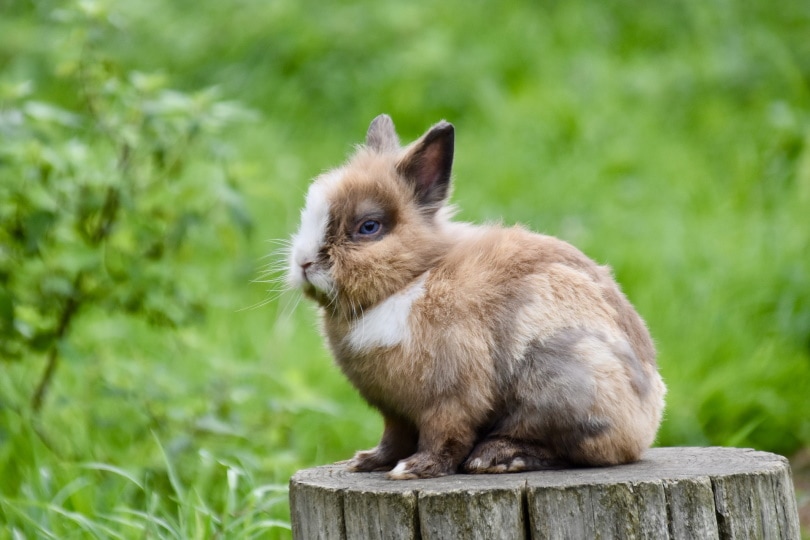 While the number of people owning rabbits doesn’t touch dogs or cats, there are still loyal followers who adore these animals as pets. Over 1.5 million households have over 2.2 million bunnies in their homes. The largest recognized rabbit breed is the Flemish Giant, which can tip the scales at up to 20 pounds.

However, some people prefer a smaller pet like a dwarf rabbit. The term describes animals that get up to less than 5 pounds, hence, the name. That makes them an excellent choice if you have limited space or live in an apartment.

What Are Dwarf Rabbits?

People have selectively bred rabbits, like many companion animals, with traits that suit them. The reality is that they didn’t start as pets for children. Instead, rabbits served as clothing and food, which is still the case today. However, this species has also made its way to the show circuit. That explains the range of characteristics, including the small size of dwarf rabbits.

The term doesn’t just apply to their bodies. Dwarf rabbits are typically smaller in their overall form, including their shape, heads, ears, and tails. These features enhance their cute appearance and are fitting when you consider them. Dwarfism also has biological and environmental causes as mutations or the result of poor nutrition during growth and development.

The numbers of dwarf rabbits also reflect demand. Pet owners who prefer smaller pets have driven the market and, thus, the number of smaller varieties available.

How Big Do Dwarf Rabbits Grow?

The key is in the term. Weights range from 1 to 5 pounds for these bunnies. You’ll find that the size is more consistent with recognized breeds that have a definite lineage. If the small size is a mutation, there’s no guarantee that it wasn’t a chance mutation. Offspring can be larger animals. It all depends on the genetic roll of the dice.

There are several breeds that fit the description of a dwarf rabbit. That gives you some options when choosing a pet. You’ll find that the weight ranges are limited when dealing with animals of this size. if it’s important, we suggest you get a pet from a breeder who specializes in a specific one.

It’s worth noting that the term dwarf rabbit doesn’t define a specific breed. Instead, it’s a catch-all term that describes the size of the pet, although many breeds have co-opted the name. We have identified nine that fit this description to help you home in on the one that is right for your family and lifestyle.

The Columbia Basin Pygmy Rabbit has an origin in the wild, where it almost became extinct. Unlike other varieties we’ve discussed, there is an active effort underway to return this animal to its native habitat.

Its name says it all. The fur of the Jersey Wooly Rabbit is luxurious, although it is relatively easy to groom. It’s a relatively new breed, getting official recognition by the American Rabbit Breeders Association in 1988.

The Britannia Petite defies the description that we stated earlier, with its larger head and eyes. Petite is something of a misnomer since this bunny packs a lot of energy in its little body.

The Netherland Dwarf Rabbit is probably one of the more popular varieties of this type. it began life across the pond in the country in its name. It’s a favorite of breeders, too, with 25 recognized color variations.

The Dwarf Hotot epitomizes this group down to its tiny ears and toy-like appearance. The variety first appeared in Germany before making its way across the globe, known affectionately as the Eyes of the Fancy.

There are four size classes of the angora rabbit, going from mini to giant. The definitive characteristic is their gorgeous fur, which looks as good on us as it does on our pets.

The Miniature Cashmere Lop Rabbit is another relative newcomer to the dwarf group. As the name implies, it has ears that hang down instead of upright. Many fanciers find it an endearing trait.

The name of the Dwarf Lionhead Rabbit is an apt one that describes the large size of its head compared to the rest of its body. It is a sweet bunny that will make an excellent pet for kids new to pet ownership.

The Dwarf Lop Rabbit is an even smaller version of its miniature cousin. This variety hails from Australia where it enjoys living outdoors in the warmer climate of this country. It’s easy to care for, with an agreeable nature.

What Size Cage Does My Dwarf Rabbit Need?

The size cage you need for your dwarf rabbit rests on whether you keep it indoors or outdoors and whether you let your bunny out in the yard or house. There are several things to consider when making this choice. Rabbits, like other similar species, have teeth that grow throughout their lifetime. That fact fuels their desire—and need—to chew things.

A rabbit doesn’t know any better. Your furniture looks just as good for gnawing as the treats it’s supposed to chew. However, that also applies to things you don’t want in your pet’s sights, such as electrical wires. Suffice to say that if you keep your bunny in its cage all the time to avoid the risks, you have to go bigger, even if it is a dwarf variety.

You can get a cage as small as 18 inches W by 24 inches L. However, if you don’t let your pet out, err on the side of caution, and go bigger. That will ensure your bunny has enough room to exercise and prevent obesity.

What Should I Feed My Dwarf Rabbit?

Dwarf rabbits, like other varieties, are herbivores. It’s imperative to feed them nutrient-dense foods, such as timothy hay. They’ll make these choices in the wild. For captive animals, it’s up to you to provide the best diet for them. That means a high-fiber food to prevent GI distress, which can cause dehydration and other serious symptoms.

Their food should provide them with sufficient amounts of vitamins A, D, and E, all of which are fat-soluble and stored in the rabbit’s body. Juvenile animals require 16% protein, up to 4% fat, and up to 16% fiber. The figures for adults are 12%, 2%, and 20%, respectively. The amount you offer should equal what they can eat in about four hours to prevent obesity or malnutrition.

Rabbits are susceptible to a variety of bacterial and viral diseases. Maintenance is an excellent way to prevent them. Quarantining new pets is another way to contain them. They are vulnerable to several respiratory issues, such as rhinitis and pneumonia. Bunnies can also get eye and ear infections. Again, a clean cage goes a long way toward keeping your rabbit healthy.

Viral diseases, such as rotavirus and myxomatosis are serious,  life-threatening health issues. That’s one reason why we recommend screening the seller from which you buy your pets. Some of the worse and most insidious conditions occur because of poor sanitation or contaminated food, such as intestinal coccidiosis. It’s imperative to act quickly if you notice GI distress.

Many of these health issues we’ve described require immediate veterinary care. We suggest finding a vet who specializes in small animals before you get your pet rabbit and before you need their services. Some things can progress rapidly, making quick action essential. After all, rabbits are small animals, especially dwarf varieties.

If you want to have a rabbit as a pet, look no further than a dwarf variety. Their small sizes and delightful personalities make them an ideal choice for first-time pet owners and children. They are relatively long-lived for a small animal, with many being low-maintenance, too. That’s not even addressing the more evident trait—their absolutely adorable looks. They will capture your heart.

The 14 Best June Beauty Launches That Won Our Editors' Hearts

How Long Do Poodles Live on Average? What Affects It?

Friendships In Your 30s – It Starts With Coffee

how to make sure your children’s toys are NONTOXIC