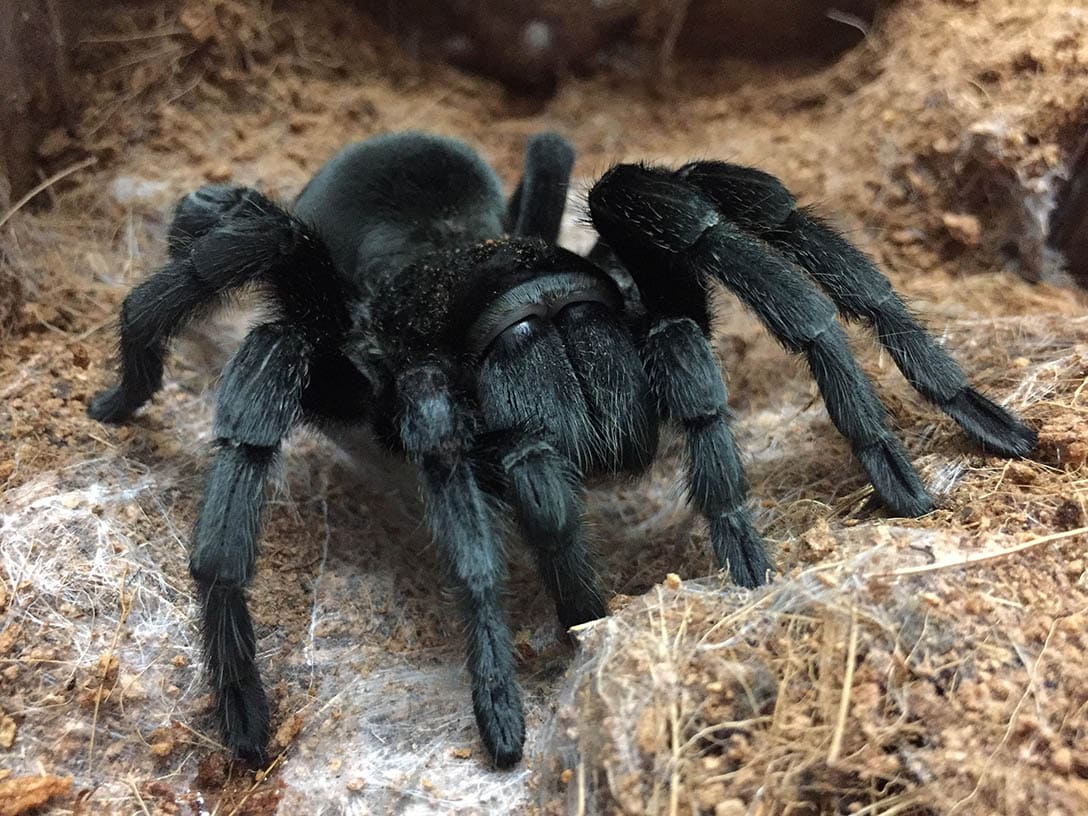 Tarantulas are exotic pets with very specific care requirements that can be difficult for new owners to meet. However, Grammostola pulchra, more commonly known as the Brazilian black tarantula, is a great tarantula for beginners. This is a hardy, resilient spider that can thrive in varying conditions. Moreover, they’re known for their docile natures and lack of aggression, which makes them ideal for those who wish to handle their tarantula. Caring for these spiders is relatively simple, and in this guide, we’re going to cover all the basics that you need to know to keep your Brazilian black tarantula in peak health.

For those in the know, tarantulas can make exciting and fun pets. Few pets get the wow factor that tarantulas enjoy, and Brazilian black tarantulas are some of the most incredible in appearance. These behemoths are all black and can span more than 8 inches across when fully grown. They’re quite impressive to witness, with thick, chunky bodies covered in glistening hairs that give it a velvety appearance.

While these are beautiful tarantulas, what’s really appealing about the Brazilian black tarantula is how easy it is to care for. These are ideal tarantulas for first-time caretakers. They’re so sturdy and resilient that it’s sort of difficult to mess them up. These tarantulas aren’t very particular about the temperature of their environment and they don’t display the bad tempers you’re likely to see with other tarantula species. Rather, Brazilian black tarantulas tend to be calm and docile, and many owners of them claim that theirs have never shown aggression of any sort; other than during feeding of course!

Thanks to their docile nature, these are some of the safest tarantulas to hold. They’re not likely to bite, and if they do, their venom is rather mild. That said, the fangs of a full-grown Brazilian black tarantula are large enough to cause damage, so you still don’t want to experience a bite. Luckily, these tarantulas are known for being very tolerant of handling.

How Much Do Brazilian Black Tarantulas Cost?

One of the most appealing things about the Brazilian black tarantula ownership is its low barrier to entry. Not only are they incredibly easy to care for, but these tarantulas are also quite affordable. You should expect to spend about $100 on a good-quality Brazilian black tarantula, which is extremely cheap for an exotic pet. Thankfully, caring for these tarantulas is similarly affordable, as all they really require is a steady diet of insects.

Many tarantulas exhibit aggressive behaviors and bad tempers. Luckily, the Brazilian black tarantula rarely displays such tendencies. Instead, these tarantulas are usually calm and laid back, making them one of the safer species to handle. They don’t seem to have any natural proclivity towards aggression like other tarantula species, which is why they’re often recommended as the first species for beginning tarantula keepers to start with.

With a name like Brazilian black tarantula, there’s not a whole lot of room for variance. All of these spiders look essentially the same. They’re stout spiders that are covered in glistening black hairs. Compared to other tarantulas, Brazilian Blacks are chunky and thick. They can also reach rather impressive sizes, often spanning 8 inches across when fully grown.

How to Take Care of a Brazilian Black Tarantula

You’ll need a tank that’s at least 10 gallons for a single Brazilian black tarantula, though it would certainly be more comfortable with 15 or 20 gallons of space. Make sure the tank is well-ventilated and is covered with a secure lid that your spider can’t lift.

Your Brazilian black tarantula will be happiest between 75-85 degrees Fahrenheit, but they’re not terribly picky. Since they’re such resilient tarantulas, fluctuations in temperature won’t have a major effect.

You don’t need to put too much thought into your tarantula’s lighting. It just needs light during the day, and you can use standard fluorescent bulbs that are cheap and use very little power. Keep them on during the day and turn them off at night.

Brazilian black tarantulas are burrowing spiders, so you’ll need enough substrate for yours to burrow into it. This means about 4-5 inches of substrate. Good choices include coconut coir or dry potting soil.

Aside from burrowing, your tarantula will also need a place to hide under something solid, such as a piece of wood or rock.

These tarantulas aren’t very particular about the humidity of their enclosure. Whatever the humidity level is in your home will be fine.

Your tarantula will need constant access to water. However, the dish should be small and shallow so as not to present a possible drowning danger.

Do Brazilian Black Tarantulas Get Along with Other Pets?

Tarantulas of any kind are a poor choice for communal housing and Brazilian black tarantulas are no exception. These spiders are actually cannibalistic, so if you attempt to house two in the same enclosure, you’re going to end up with at least one of them dead and probably eaten by the other spider. Of course, it’s equally likely that they both die due to wounds sustained during fighting.

There have only been a few types of tarantulas that have been successfully housed together. Even among these types of “communal” tarantulas, it’s more common for one member of the enclosure to end up dead. Brazilian black tarantulas are not one of the tarantula species that have been housed communally with success, so aside from breeding, it’s not recommended that you attempt to house two together.

What to Feed Your Brazilian Black Tarantula

Thankfully, Brazilian black tarantulas are hardy and resilient, so they’re relatively easy to keep in good health. As long as you don’t make any major mistakes like dropping your tarantula, it should remain healthy. Of course, if you drop your tarantula, you’ll cause devastating damage and likely death, so be careful not to do that.

Male Brazilian blacks can look forward to a maximum lifespan of 5, possibly 6 years. Females, on the other hand, can live for well over 20 years and some have even survived for three decades! Just keep feeding your tarantula, don’t let it freeze or overheat, and make sure it always has water, and you’ll have an eight-legged pet for quite some time to come…unless you have a male.

You need to be careful when attempting to mate Brazilian black tarantulas. You can leave the male and female together for a short time while they mate. However, there’s always a risk that if you leave them overnight, your male will be dead in the morning.

If your tarantulas successfully mate, your female will lay an egg sack several weeks later. The egg sack of a Brazilian black tarantula holds about 650 slings or baby spiders.

Are Brazilian Black Tarantulas Suitable For You?

Tarantulas are a pet suited for only a small percentage of people. If you’re one of the few people that actually wants to keep a giant spider in their home, then the Brazilian black tarantula is almost certainly a great choice for you. These are some of the most beginner-friendly tarantulas around, though they’re still desirable for experts as well thanks to their docile natures.

If you’re looking for a tarantula that you can safely handle, the Brazilian black is one of your best bets. These spiders are known to be very tolerant to handling and displaying little to no aggression. You’re unlikely to get bitten by a Brazilian black tarantula. And unlike many tarantulas, Brazilian blacks don’t generally have a bad temper.