20 Types of Milk Snakes That Make Great Pets (With Pictures) 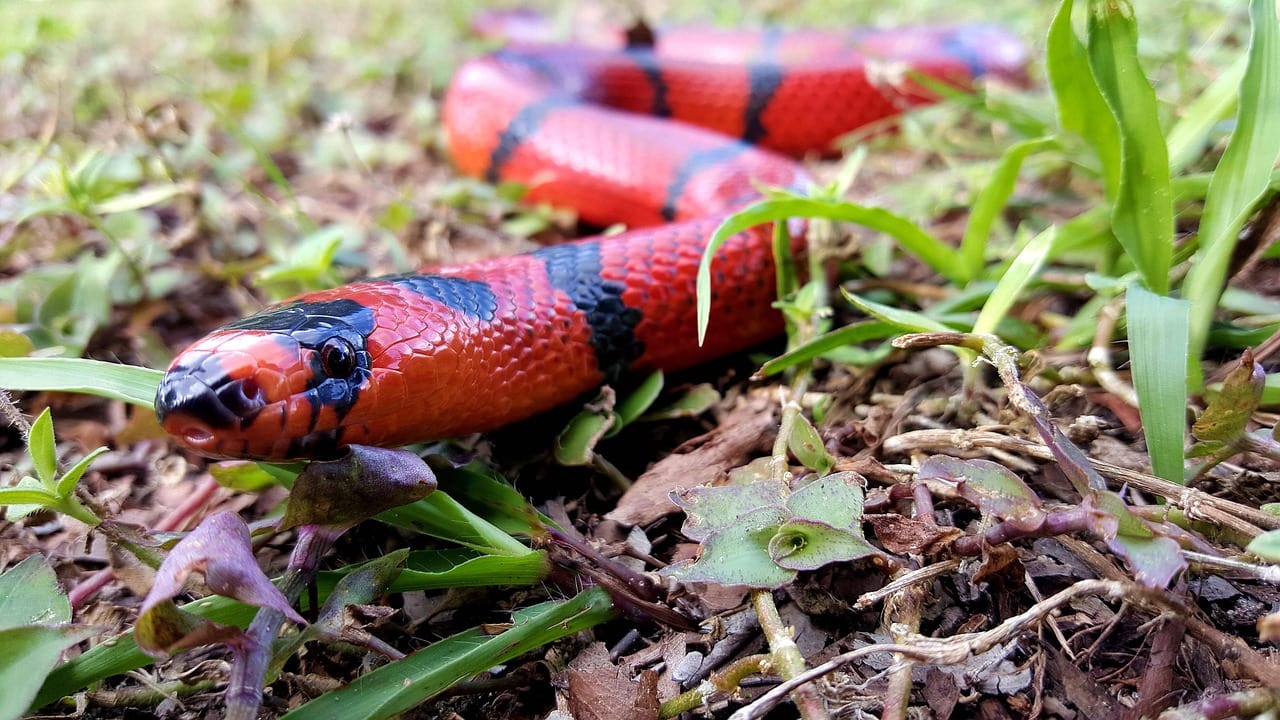 Milk snakes are an excellent choice for snake lovers. The snakes have vibrant appearances, with most having at least three color variations and patterns. In addition, they are easy to handle, nonvenomous, and keen feeders.

Here are the types of milk snakes that are great pets.

The Eastern Milk snake has a spotted pattern of a gray and reddish-brown color. Its length ranges from 2 to 4 feet and is commonly found in the United States.

Snakes of these species have a spear point pattern or a brown arrowhead on top of their heads. These snakes are a good choice for beginners since they are easy to handle.

The Black Milk Snake evolves from a black, red, yellow, or white hatchling to an entirely black or blackish brown when it’s fully grown. The species grows into a large variety of about 4 to 6 feet in length. You should be careful when picking up adults of this variety as they can be nervous at first.

This is also a small variety of the Milk Snake, which grows at most 2 feet in length. The species is tiny such that even the adult snake can only eat the pinky mice. It has narrow bands of black, red, and yellowish-white.

These are some of the most popular and colorful varieties of milk snakes. They are available in different color morphs, mainly of pale bands of yellowish-white flanked by short and wide black bands and broad red bands. They have a slender body and grow longer than 3 feet.

The Honduran subspecies have a stout, thick body and can grow 4 to 5 feet in length. It has wide bandings in black, red, and orange-yellow; thus, it is a brightly colored snake. Although the Honduran Milk Snake can be hardy and nervous, it is suitable for beginners.

The Pale Milk Snake originates from the northernmost regions. It was named from its coloring, which is a dusty white, never yellow.

This snake has small or absent black rings around the red areas, which develop as saddles that do not encircle its belly. It’s one of the smaller subspecies of Milk snakes, with the adults growing to just between 18 and 24 inches.

The Mexican Milk Snakes are brightly colored with black and yellow bands against a background of red. The adult snake will not grow beyond 30 inches.

Although this subspecies was once rare, it is now widespread and bred in albino, apricot, and tangerine colors. Pueblan Milk Snake grows to about 3 feet in length.

This species is highly sought after due to its bright color pattern of white, red, and black rings. In addition, it’s slender in size and one of the smaller varieties which grows o just 14 and 18 inches long.

The Sinaloan species are primarily red, although they can vary significantly in color. The snakes can be found in wide orange-red bands separated by short black bands. They are avid eaters who can grow to at least 4 feet in length.

The Sinaloan Milk Snakes are affordable since they are widely bred.

Red Milk Snake is one of the most distinct and widely distributed milk snakes. It has a black and white snout with a redhead. Additionally, its back consists of mostly red outlined by a narrow black line.

Red Milk Snakes are hearty eaters, and they grow to an excess of 3 feet in length and feeds on full-sized mice as soon as they hatch.

This variety of snakes can grow between 3 and 4 feet in length. Stuart’s Milk Snakes are brightly colored with wide red rings and narrow black and white rings.

The Andean Milk Snake is one of the largest subspecies of milk snakes growing up to 6 feet long. The snakes appear in bright colors of black, red, and yellow bands, with black speckles on each scale.

They are primarily found in the Andes Mountains of Venezuela and Colombia. The snakes are known to have a good appetite, with the adult snakes eating eggs, small mammals, and other reptiles.

The Blanchard’s Milk Snake has a color pattern of black, red, or yellow bands of about the same width. Red is the dominant color as yellow, and black stripes are just about a small percentage.

The adult grows up to about 3 to 3.5 feet. It’s considered a nocturnal eater and consumes various animals like reptiles, birds, rodents, and invertebrates. It has a lifespan of about 15 years, and it is an easy snake to handle where it can be kept together with other snakes since it does not attack them.

This snake was named after Dr. James R. Dixon. It has twenty rings on its body, with red being the dominant color interrupted ventrally by black bands. The tail has five yellow rings, and its head and snout are black. The adult snake is about 42 inches long. It mainly feeds on lizards, snakes, small rodents, and birds.

The Dixon’s snake is not much of a climber, and it likes keeping to itself by hiding. Therefore, you can choose a wide cage as opposed to a tall one. Additionally, use boulders and rocks to give it some hiding places where it can spend its days in deep sleep. You are also advised to handle the snake a day after feeding it for your safety.

The Guatemala Milk Snake has red, yellow, and black stripes making them look like deadly sea snakes. They are relatively small, growing between 3 to 6 feet long. However, they can be tamed and held when taken care of properly.

The Jalisco Milk Snake originates from Mexico, and it has a back head, redbelly, and red or yellow rings with smooth and shiny scales. It grows up to 4 feet in length and has a lifespan of 15 years to a maximum of 20 years. It’s active during the day and should be enclosed in an aquarium that allows sufficient lighting with an escape-proof lid.

These snakes have a body pattern of three colors: red/orange, black, and yellow/white. They are entirely nocturnal as they are primarily found in the dark in a wide variety of their habitat.

The adults grow up to the length of between 18 to 36 inches. The snakes feed with reptile eggs, lizards, and rodents, with others feeding on other snakes.

This subspecies is mainly found in the Ecuador and Panama regions. It’s one of the largest subspecies of Milk snakes, growing up to 148cm.

It has yellow scales on the head and a short series of 10 to 18 broad dorsal rings. It’s known to consume a wide array of snakes, small mammals, birds, eggs, lizards, invertebrates, and fish.

How to Take Care of Your Milk snake

All Milk snakes are easy to handle as they require minimal care throughout the week. They rarely strike, and their bite does not hurt. However, they try to get away when they feel threatened.

You can start handling your snake a few days after bringing it home. Start with short daily sessions to build trust. Then, be persistent and gentle until the snake gets comfortable with handling.

However, snakes can regurgitate their meal if handled immediately after eating; thus, you should avoid that. The snakes will tend to wrap themselves around your arm.

Start unwrapping them from the tail end as the head will feel stronger. Do not leave any gaps within your cage, as Milk snakes can escape from even the smallest of spaces.

You should keep Milk snakes separately since they may attack and feed on each other. Most Milk snakes like burrowing; therefore, you can provide fresh care litter or aspen shavings in their cages. The adult snakes will need more space for exercise; thus, consider space when looking for a cage.

Milk snakes, being cold-blooded animals, require low temperatures so that they can thermoregulate their bodies. You should keep some hides in the cages to provide hiding places, so they can imitate the wild. Have a consistent feeding schedule for your Milk snakes by providing them with mice or frozen-thawed food at least once or twice a week.

Who Plays Max On 'Gossip Girl'? Thomas Doherty Was On The Disney Channel