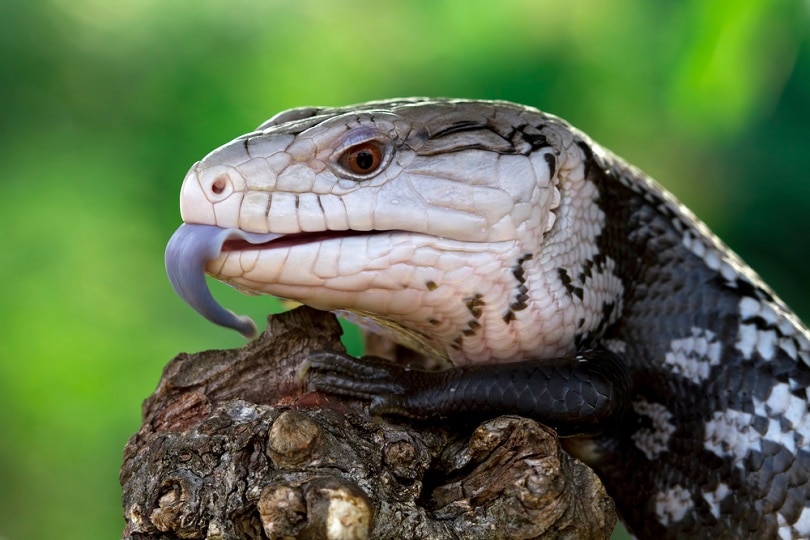 Blue tongue skink morphs are a group of Australian lizards that are somewhat shy compared to other lizard species. As the name suggests, these reptiles have a blue tongue, and they tend to move slowly due to their short legs. If you are looking to get a blue tongue skink morph for your terrarium but aren’t sure what kinds are out there, you’ve come to the right place. We will list all of the different types, and for each one, we’ll include a picture and a short description so you can decide which is right for you.

The Adelaide pygmy blue-tongue skink is a species most experts believed was extinct until 1992 when they rediscovered it in southern Australia. It has a restricted habitat and often lives in spider burrows. In 2016, scientists began a successful captive breeding program to help increase the numbers. These blue tongues are still quite rare, but you can contact Flinders University for more information about how their work is going and the possibility of purchasing one.

It’s much easier to use the common name of the tiliqua gigas, the Indonesian blue-tongued skink. This lizard is closely related to the eastern blue-tongued lizard, and they look quite similar. You can find these animals in the rainforest, so you will need a lot of humidity to keep these in your home. It’s a lean reptile with a long tail.

The Merauke blue-tongued skink is a subspecies of the Indonesian blue-tongued skink, and it has many of the same features. It requires a tropical environment with high humidity. It can grow to reach 30 inches long and is very popular in its native area, but captive breeding is not yet perfected for this species so it can be difficult to find in America.

You will find the Centralian blue-tongued skink in New South Wales, Australia if you want to see them living naturally. It’s usually brown or grey with orange bands along the length of the body. The underside is pale white. It’s a sedentary lizard that usually moves less than 400 feet per day. Its primary diet is seeds, insects, and livestock dung.

The blotched blue-tongued skink is from southeastern Australia, and it’s one of the larger skinks on our list. It grows to about 20 inches long and has a fat body. It usually relies on camouflage to hide from any predators, but it also has a powerful jaw and will bite if provoked. It will also drop its tail if captured but will hold onto it longer than other skinks.

The western blue-tongued skink is another larger-sized skink native to southern Australia. It grows to about 18 inches long and is usually brown with darker brown bands across the body. This species tends to hiss and flatten its body to ward off enemies. Despite having a larger natural habitat than other skinks, its numbers continue to fall due to habitat destruction.

As the name suggests, the stumpy-tailed skink has a very small tail that makes it unique compared to the other skinks on this list. It’s also slow-moving compared to the other slow movers, so don’t expect much action in your terrarium. It has a heavily armored body and is one of many shades of brown. It likes to burrow, eating plants and snails.

The common blue-tongued skink is one of the more common skinks available. You can find it in Australia as well as some islands in Indonesia. It can grow to about 23 inches and can weigh more than 2 pounds. It’s adaptable to a wide range of habitats and often lives 30 years or more.

The eastern blue-tongued skink is a subspecies of the common blue-tongued skink, and it has many of the same features, but you will only find it in Australia. This species can also live up to 30 years and tends to hiss and expose its tongue when threatened.

The northern blue-tongued skink is another subspecies of the common blue-tongued skink with many of the same features. You usually only see these lizards in northern Australia, and they don’t have as long a lifespan, often living only 20 years on average. These skinks are yellowish with darker stripes on their back, and they tend to grow about 22 inches long.

The Irian Jaya blue tongue skink has a distinctive color pattern that many people find attractive. It has dark brown stripes over a gold body, and the body can range from cream to red. It can grow to be 30 inches long and often lives for 30 years.

Blue tongue skinks are unique lizards that can be fun to own if you have a large enough aquarium and can achieve the high humidity levels they require. The diet is similar to other reptiles, so it’s not hard to feed them but locating one to buy might be challenging. The common blue-tongued skink is likely your best option because they have the widest environment and their numbers are high, but you can probably find any of them if you are vigilant.

We hope you have enjoyed reading over our list and found a few skinks you have not heard of before. If we have given you a new pet to track down, please share these 11 common blue tongue skinks on Facebook and Twitter.