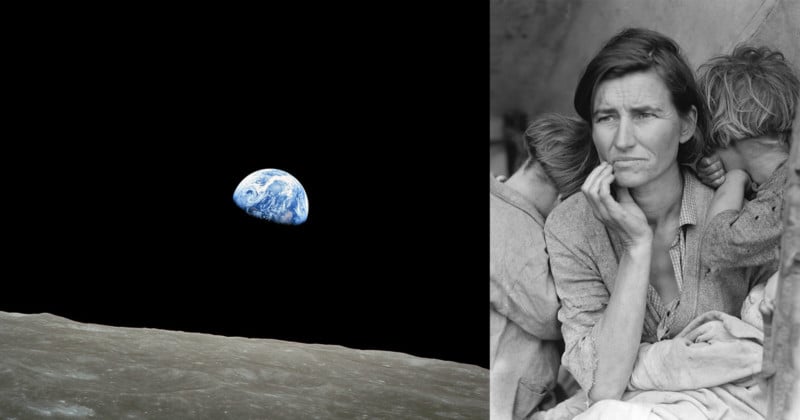 William Anders’ Earthrise and Joe Rosenthal’s Raising The Flag on Iwo Jima are some of the most recognizable photos of all time. But few people know what cameras were used to take these iconic images.

This is a list of some of the most famous photos of all time and the classic cameras that were used to capture them. 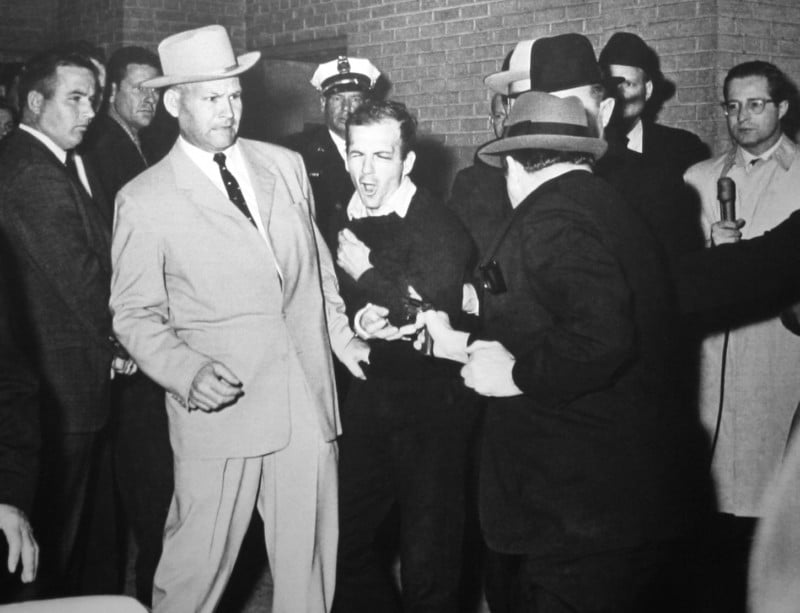 On November 22, 1963, Robert Jackson was assigned by the Dallas Times Herald to cover President John F. Kennedy’s visit to the city — which ended in his assassination by Lee Harvey Oswald.

Two days later, Jackson was told to go to the police station to photograph the transfer of Oswald to the county jail.

Jackson’s photo taken immediately as the shot rang out, shows Oswald impacted by the bullet while Dallas police detective Jim Leavelle who was escorting Oswald, reacts in horror.

In 1964, Jackson was awarded the Pulitzer Prize for Photography for his image of the murder of Oswald. 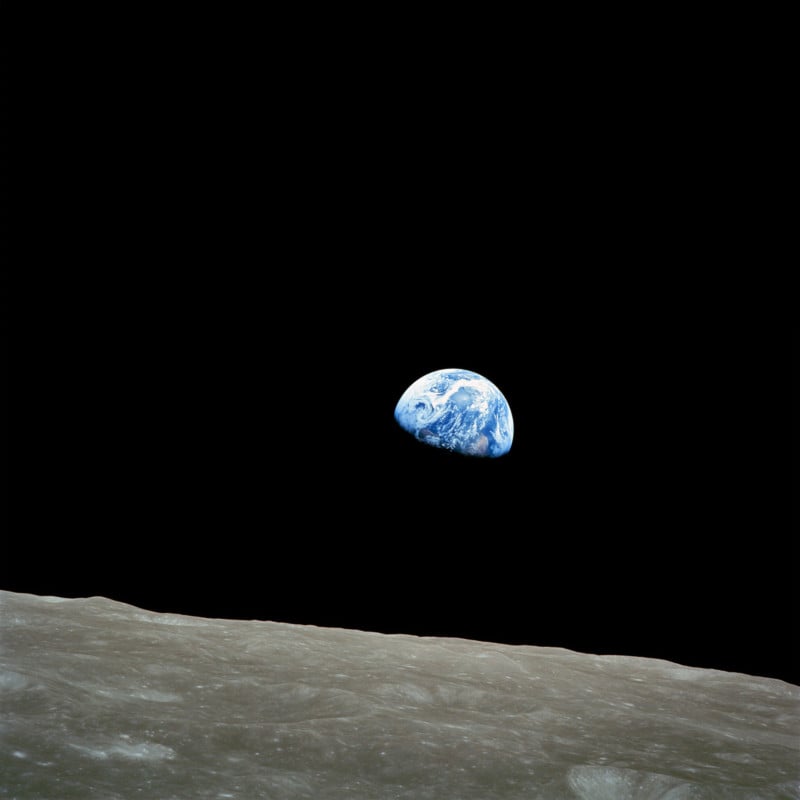 Earthrise is a photograph of Earth and some of the Moon’s surface that was taken from lunar orbit by astronaut William Anders on December 24, 1968, during the Apollo 8 mission. It has been described as the most influential environmental photograph ever taken.

The photograph was captured with a highly modified Hasselblad 500 EL with an electric drive. The camera had a simple sighting ring rather than the standard reflex viewfinder and was loaded with a 70mm film magazine containing custom Ektachrome film developed by Kodak.

Immediately prior, Anders had been photographing the lunar surface with a 250 mm lens and the lens was subsequently used for the Earthrise images. 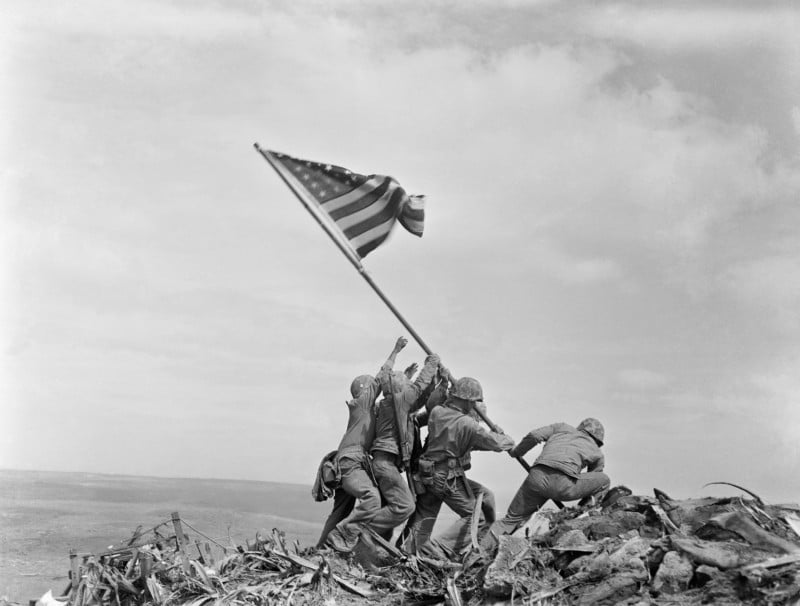 Joe Rosenthal’s Raising The Flag on Iwo Jima was shot in 1949 towards the final stages of the Pacific war and shows six United States Marines raising the U.S. flag.

Rosenthal photographed the flag raising on a Speed Graphic camera and then sent his film to be developed and printed.

Upon seeing the picture, Associated Press (AP) photograph editor John Bodkin exclaimed “Here’s one for all time!” and instantly transferred the image to the AP headquarters in New York City.

The photograph was quickly picked up off the wire by hundreds of newspapers. It “was distributed by AP within seventeen and one-half hours after Rosenthal shot it — an astonishingly fast turnaround time in those days.” 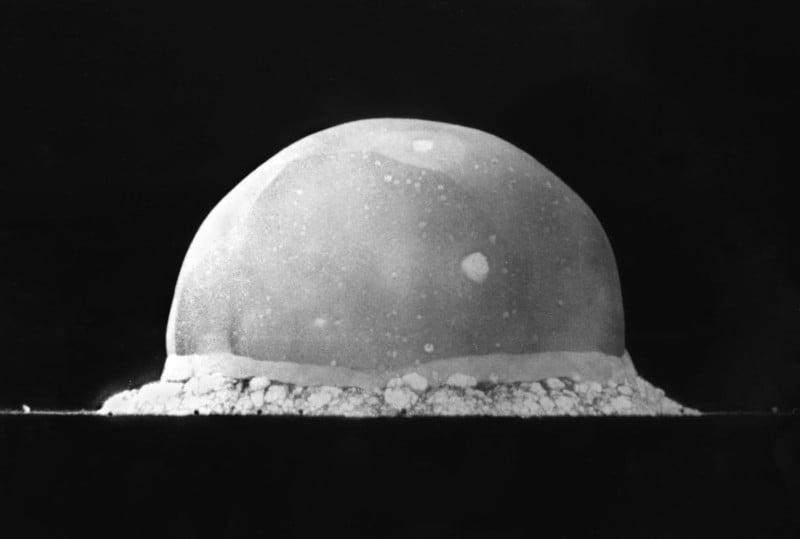 The Trinity nuclear test, part of the Manhattan Project, was the most important scientific experiment in modern physics.

The 1945 detonation was so fast and so bright that photographer Berlyn Brixner set up an array of cameras to capture the moment for Los Alamos Laboratory.

Brixner was positioned 30,000 feet away from the explosion and had 50 cameras of varying speeds running from different locations to capture the shot in full motion. 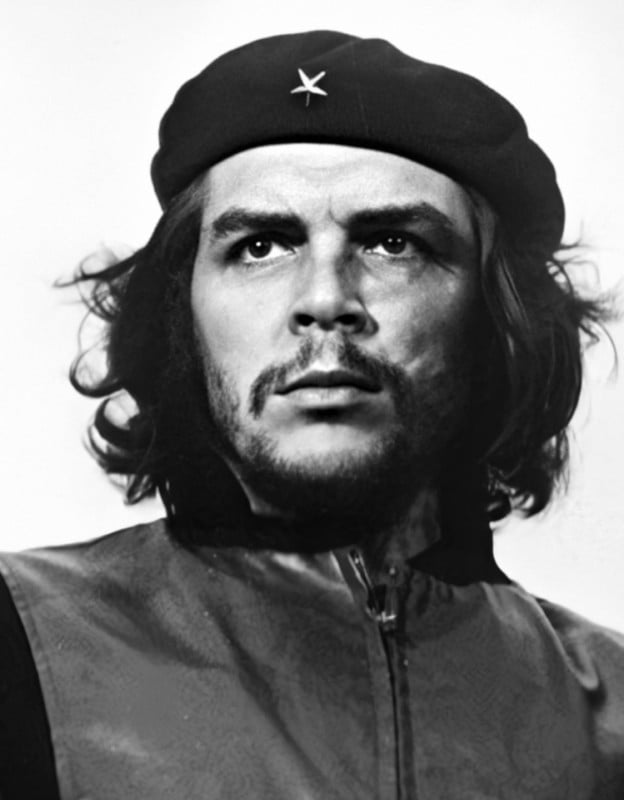 Guerrillero Heroico is a definitive photograph of Marxist revolutionary Che Guevara taken by Alberto Korda and helped solidify the leader as a cultural icon.

The image was captured on March 5, 1960, in Havana, Cuba, at a memorial service for victims of the La Coubre explosion.

This classic portrait of Guevara is actually a cropped version of the wider image, which depicts a palm tree and the profile of Argentine journalist Jorge Masetti.

To take the photograph, Korda used a Leica M2 with a 90mm lens, loaded with Kodak Plus-X pan film. In speaking about the method, Korda remarked that “this photograph is not the product of knowledge or technique. It was really coincidence, pure luck.” 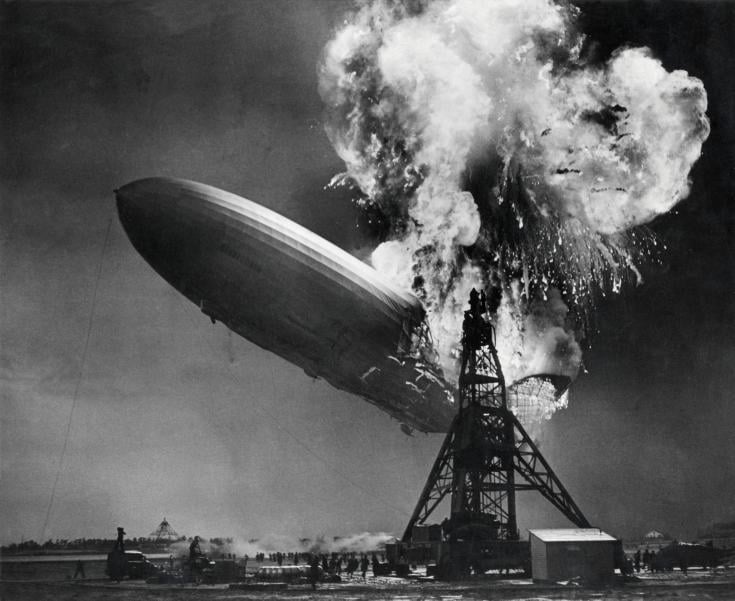 Sam Shere was one of the hundreds of reporters that were present during the explosion of the Hindenburg dirigible balloon as it returned from a transatlantic crossing.

Shere was equipped with a Graflex Speed Graphic camera and took a picture of the Hindenburg’s arrival.

When it suddenly caught fire, a horrified Sam reached for his camera and took a picture of the Hindenberg burning with the last remaining film that his camera had.

Shere had no idea how the photo would turn out, as he was in such a hurry to take the photo that he shot it from his waist level.

He said: “I had two shots in my big Speed Graphic but I didn’t even have time to get it up to my eye.

The photographer was later amazed to see how clear the image turned out.

Today marks the 75th anniversary of the D-Day landings on Omaha Beach: https://t.co/N2TDd8a5ST

Robert Capa came onto the shore with U.S. soldiers on June 6, 1944, otherwise known as D-Day, in an early wave of the attacks on Omaha Beach. He used two Contax II cameras mounted with 50 mm lenses and several rolls of spare film to shoot the photo and returned to the United Kingdom within hours to meet a publication deadline for Life magazine’s next issue. 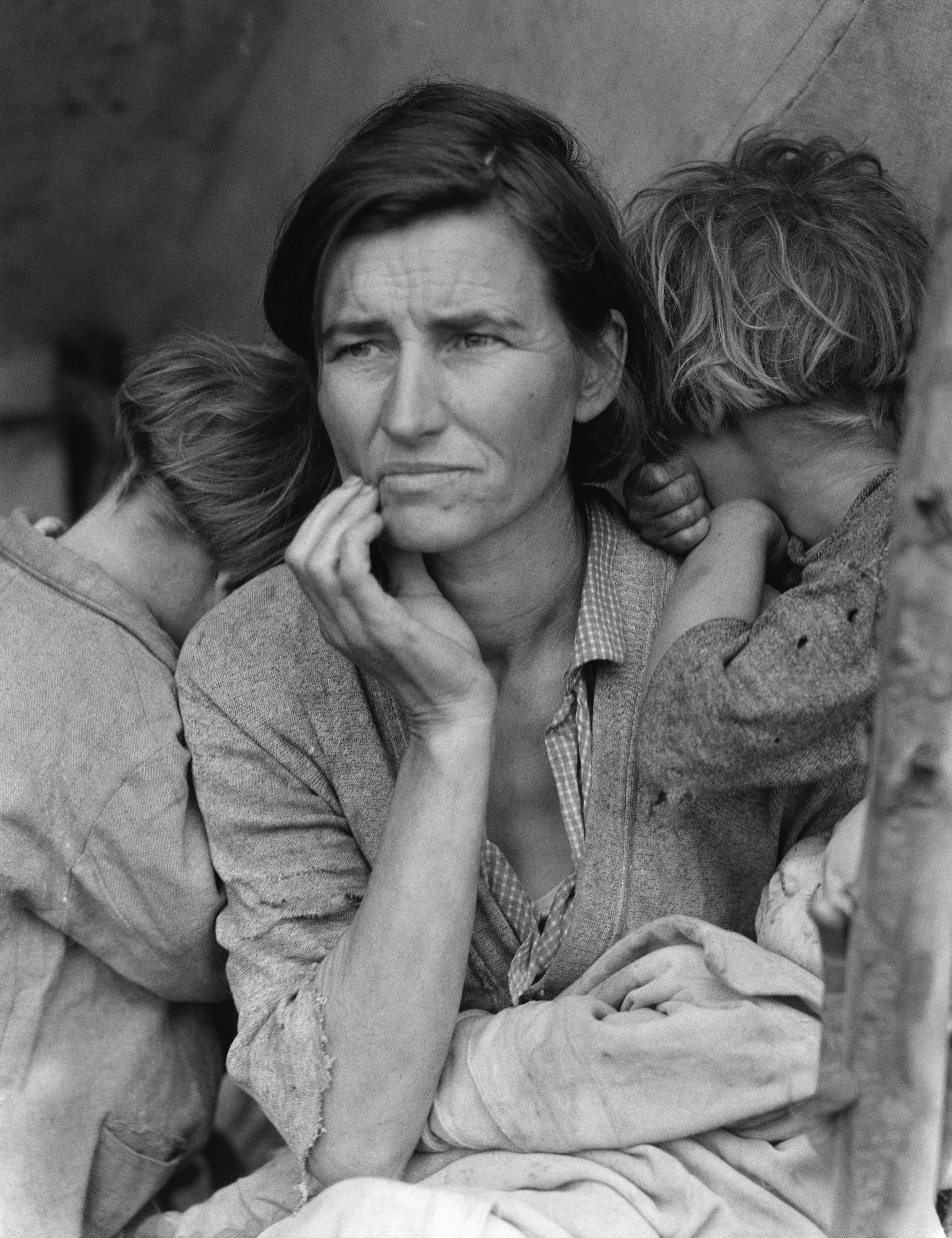 Migrant Mother is a photograph taken in 1936 in Nipomo, California by American photographer Dorothea Lange[1] which has an iconic image of the Great Depression. Lange took the photograph with a Graflex Super D camera.

Most disappointing tech and games 2022

This Elegant Coahuila Wedding Lasted Until 3 AM

25 of the Richest TV Personalities in the World

Why We Take Vacations Without Our Kids – It Starts With Coffee