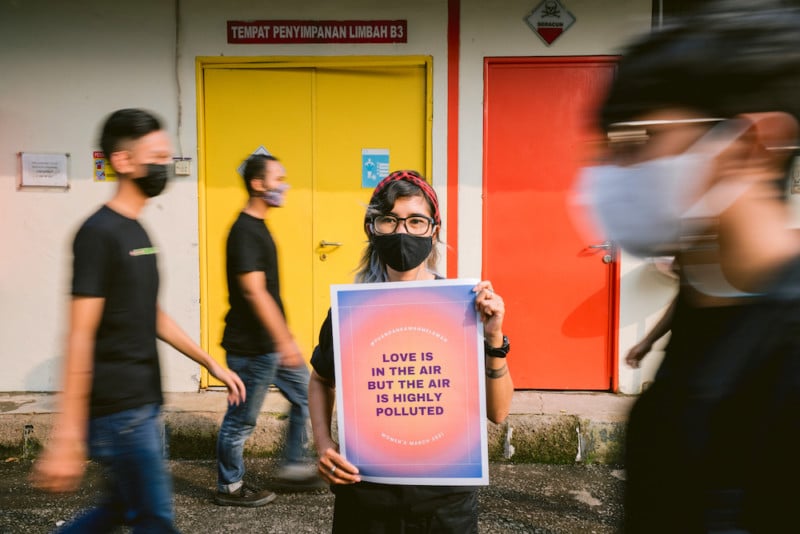 Photographer Dinda Avena wants to inspire those who have experienced and survived violence, feel unsafe in public, who are suffering due to sexual identity, for those whose land is being seized, and for all marginalized communities to not let their voices fade away.

Dinda Advena (she/her) is a queer photographer from Indonesia. She started taking documentary and stage photography for the punk music community and has has exhibited her work through Sweden, Singapore, Malaysia, and all over Indonesia. Right now she is focusing on gender issues, women’s rights, environmental justice, and Indonesian landscapes.

“May your spirit and flame continue to burn, even though our voices are fading away. Happy Kartini’s Day,” Advena wrote when she submitted her photos online to Scopio. 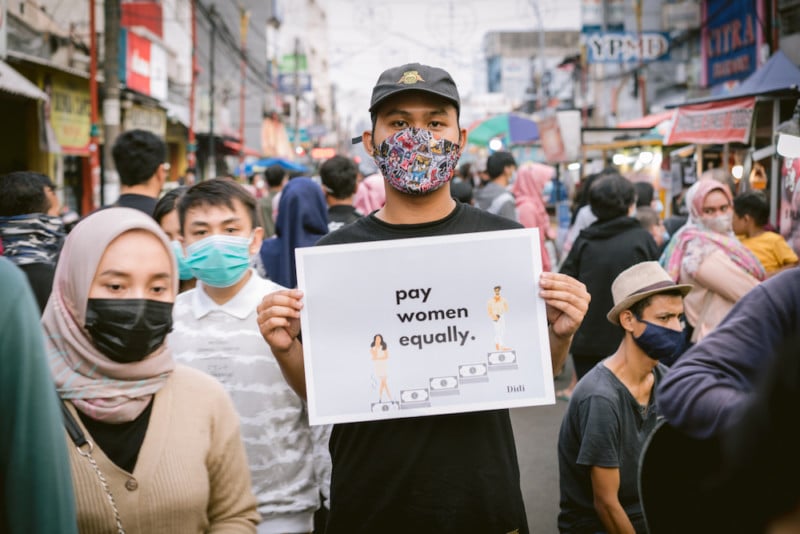 “This year hit different because of the pandemic, especially after the recent Church bombing attack – it is not safe to march in the street. The team decided to do online action to ask everyone who believes in women’s issues to do the same: taking pictures one by one in different locations while holding posters of each demand, then post it in Social Media.”

Kartini’s Day takes place on April 21 every year and is a symbol of modern women’s empowerment in Indonesia.

“Every year on April 21, women from Indonesia ban together for Kartini’s Day to commemorate Rayden Ayu Kartini – who was a fierce women’s right activist and critic who questioned the Javanese norms created by the male-dominated society,” Avena explains. “Rayden Kartini’s countless letters and words would become a national symbol that empowers Indonesian women to stand strong for their rights today.”

It’s not men who we want to fight, but old-fashioned opinions and old customs. – R.A. Kartini

This year, women marched to help seek the advancement of The Elimination of Sexual Violence Bill (Indonesian: Rancangan Undang-Undang Penghapusan Kekerasan Seksual, abbreviated RUU PKS). The consideration of this bill has been going on for years and it almost got dropped due to “difficulties” in arranging the bill, according to the House Commission VII.

Citizens like Dinda have taken it upon themselves to come together using tools like photography and social media to ensure that this bill, among others, are no longer”‘waited on” and “passed.”

Dinda and fellow activists make themselves visible in a crowd with their message and use photography to amplify that to everyone online.

It gets people looking at the message, one way or another. Men and women alike joined in to help spread the message behind gender equality, equal pay, and support the changes.

“But this march is not only to confront gender inequality issues but is done to ensure the safety and protection of Indonesian women.”

This march has helped to make significant strides in the nation and will continue year after year as it is pivotal to advancing women’s rights that are far too often neglected or waited on.

You can explore Dinda’s photography on Scopio here. She also recommends you search these hashtags to see more on this message: #PuanDanKawanMelawan #WMJ2021 #WomensMarch #SahkanRUUPKS #HariKartini

This article provided courtesy of Scopio. Scopio is the most diverse community-based platform in the world where artists can sell their work and get hired in over 150 countries. Check out their community of 14k plus contributors and a library of over 400k authentic images.

What Data Do You Need in Our Cookie-Less Future?