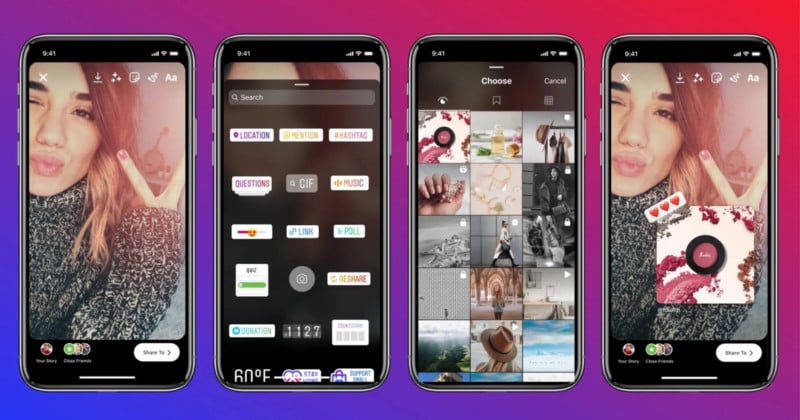 Instagram is testing a change to its services that makes it harder to reshare content, therefore making shares more “intentional.” While before users could share a post to their story, it could be done from the post itself. With this change, it could only be done from the “stickers” tab.

According to a report from The Verge, Instagram says the test is designed to make users feel as though what they share is more “intentional” and “deliberate,” though Instagram likely wants to cut down on what it views as “spam” in stories. As it stands, the social media giant appears to believe that just hitting the share button on posts is too easy and wants to add more friction to it. The Verge points out that this change might raise the bar of what people see and therefore get them to tap through more sections of the app and increase the number of times a user will see photos and videos.

“We know that people sometimes find reshared content less engaging, personal, and fun,” an Instagram spokesperson told TechCrunch regarding the test. “We hope that with this new test experience, people are encouraged to be more intentional and deliberate when sharing things that matter to them.”

The new method asks users to instead of hitting the easy-to-find share button on posts instead navigate away from that post itself and go into the “create” mode. From there, users will have to navigate to a sticker labeled “reshare” which will populate the feed with posts viewed, saved, or posted in the last hour. This can reportedly include IGTV, Reels, and videos from the Instagram feed as well as static photos.

Instagram regularly tests changes to its system and enhancements to the experience, and not every test ends up becoming a feature that rolls out to all users. For example, Instagram has tested hiding like counts and is currently experimenting with mixing recommendations of non-followed accounts into users’ feeds. The former was eventually did come to all users, but was made optional and off by default. The latter is still in testing and its fate is still unknown.

How to Create 'Wow' Experiences: The Brain Perspective

Where Is Heather Tallchief Now? The 'Heist' Subject Is Lying Low