Bearded Dragon vs. Iguana: Which Pet is Best for You? 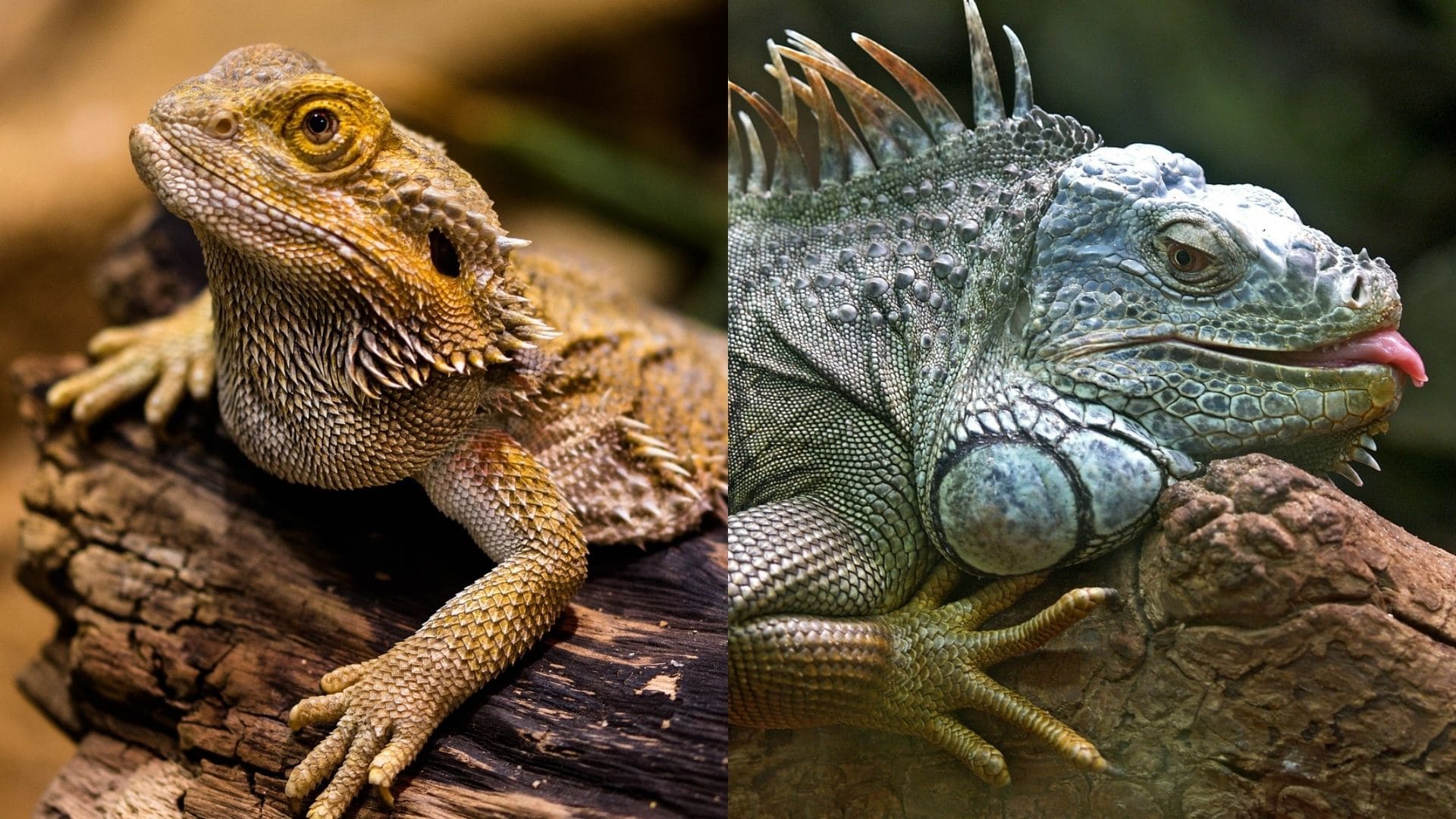 Reptiles are becoming more popular and are gaining longer lifespans as breeders learn more about them. Owning a captive-bred animal is also better for the species than keeping wild-caught ones, but choosing the right kind of reptile for your home can be challenging. Bearded dragons and iguanas are two of the most common reptiles to keep as pets, and we are going to take a closer look at both to learn more about their differences to determine which is better for you. Keep reading while we look at habitat, lifespan, size, diet, size, and more to help you make an informed decision.

The bearded dragon is a prehistoric-looking reptile that usually grows to about 2 feet long. The underside of the throat can puff out when the animal is under stress or is in the presence of a predator, which is how it gets its name. It also uses its beard for mating. It enjoys spending time in trees and bushes, and it usually lives near humans. It has a flattened body and plenty of spiny scales that look menacing but are not that sharp. You will find the bearded dragon in western Australia, where it lives in the arid, subtropical woodlands, savannas, and shore areas. It’s available in several colors and is relatively easy to maintain.

The bearded dragon can be extremely territorial and develop social hierarchies in which displays of aggression and submission are common when kept together with its own kind. Some males may even change color as a sign of dominance. The alpha male will assume a dominant stance and prepare to fight all males who do not show submissiveness. Some may even become aggressive towards females that do not demonstrate submissive behavior.

After a short courtship ritual where the male bobs his head, waves his hands, and stomps his feet, he will begin to chase after the female and bite her neck to get into position for mating. The female can store sperm and will lay two clutches of 10–30 eggs. The sex of the offspring can change based on the temperature of the environment. High temperatures can change a developing male embryo into a female regardless of its chromosomes.

You will need a 120-gallon tank for your bearded dragon with plenty of climbing branches and a UVB light to raise the temperature and give them a warm basking area. The UVB light is essential for reptiles that spend most of their time indoors. You will also need to coat the crickets your pet eats with a calcium and vitamin D supplement to help prevent the onset of a life-threatening illness called metabolic bone disease.

Bearded dragons make great starter pets for children or adults who are interested in raising reptiles. They enjoy being around humans and will sit with you for quite a while so children can get up close without your pet scurrying away. The habitat is relatively easy to create and maintain, and they have a long lifespan with few health problems.

Iguana has several species that you can keep as pets, but the most common one is the green iguana. Some experts like to call it the American iguana since it’s native to South America, and you can find it as far north as Mexico. Many areas in the United States consider it an invasive species, especially in Southern Florida, Texas, Hawaii, and the Virgin Islands. It usually grows to more than 4 feet long and can weigh over 20 pounds.

The green iguana is a common pet because of its bright colors and calm disposition. Unlike the bearded dragon that assumes an aggressive stance and puffs up its neck when threatened, the iguana will run and hide or swim away if it is near water. Only when it can’t get away will it puff up its body and neck. It can also hiss to scare off predators. If these measures are unsuccessful, it will begin to whip its tail and use its sharp claws. Predatory birds like the hawk hunt green iguanas, and you can make a hawk noise to make your pet freeze in place, so it’s easier to pick up.

Female iguanas typically lay 20–70 eggs once per year during the nesting season. The female will protect the nest as she is building it but will leave immediately after laying the eggs, leaving them vulnerable. The eggs will hatch in 10–15 weeks (about 3.5 months), and the offspring will stay together for the first year. During this time, the males will protect the females from danger, often putting themselves in danger. They are the only reptile species that exhibit this behavior.

Iguanas require a large habitat, at least 6’ H x 6’ W x 4’ D, but larger is better. Your habitat will require plenty of climbing surfaces with logs and wood so they can create a natural home. You will also need to create a basking area with a continuous temperature of 100–115 degrees Fahrenheit. You can usually accomplish this by placing a heating lamp directly over the surface, and you will need several other heating lamps as well to keep the remainder of the habitat between 80–85 degrees Fahrenheit. The heat needs to come from above because iguanas are not that good at detecting heat from below and can get burned, and the bulbs need to provide UVB light if your pet spends most of its time indoors.

Iguanas can make a great pet for an experienced user with plenty of space and the knowledge and budget to create an adequate habitat. We don’t recommend it as a first pet because it can be quite challenging to maintain the proper environment, and not doing so can lead to health problems. It can also be slightly dangerous if you don’t have experience handling reptiles. Even experts use thick safety gear and keep them away from children. However, experienced owners will get a relatively calm pet that usually lives longer than a bearded dragon and is quite colorful. The large tank will make you feel like you have a part of nature in your home, and friends will go out of their way to come and see it.

Which Breed Is Right for You?

While both reptiles make great pets and are extremely attractive, we recommend the bearded dragon for all but the most experienced owners. The large habitat required by an iguana will take up almost an entire room of your home, and you will need to keep the entire space at a high temperature year-round. Iguanas can also become aggressive and las you with their tails or scratch you with their sharp claws. The bearded dragon requires a much smaller habitat that’s easy to maintain. It does not become aggressive with humans and is suitable for children.

We hope you have enjoyed reading over this guide, and it helped you make a decision. If we have helped you choose your next pet, please share this comparison of the Bearded Dragon and the Iguana on Facebook and Twitter.

48 Cool Things For Your Home Selling Out Fast On Amazon