6 Types of Skinks That Make Great Pets (with Pictures) 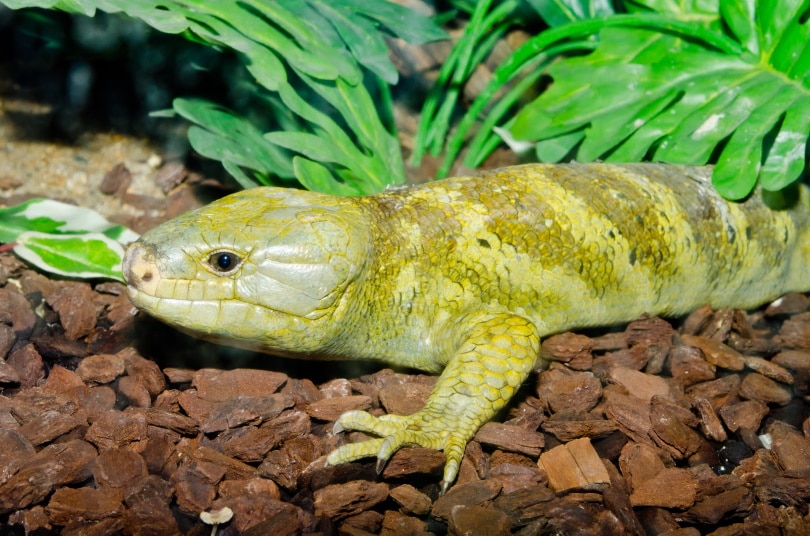 Many reptiles make good pets, thriving in captivity and being relatively simple to care for. You can even find plenty of them that are easy to handle and can provide loads of entertainment. Skinks are one of the lesser-known reptiles kept as pets, at least when compared to the likes of iguanas, geckos, and snakes. However, skinks represent a diverse reptile group with more than 1,500 members, including many with no legs that move similarly to snakes.

But not all 1,500 skink species make great pets. At present, six types of skinks are commonly considered to make good domestic pets. In this article, we’re going to take a closer look at each of these unique lizards. Hopefully, by the end, you’ll have an inkling of which one you might be interested in keeping.

When most people consider keeping a reptile as a pet, they first imagine the most popular and well-known species. Ball pythons, iguanas, leopard geckos are all common choices that are known to make great pets. But skinks can be just as good of a companion as any of these species. There are many different skinks though, and not every species is equally suited for domestic living.

Skinks are rather easy to care for, which makes them great first-time lizards. If you get the right type of skink, it will likely be docile, amiable, and easy to handle once it gets adjusted to you. Their tanks are usually rather easy to set up, and most popular pet skink species do well in an enclosure with minimal decoration. Plus, many skinks are very affordable, making the barrier to pet entry low. They require little care compared to many reptiles, and their hardy, resilient nature makes it easier to keep a skink healthy than other reptile species.

Blue-tongued skinks are aptly named after their blue tongues. While several skink species make up this group, they’re all closely related, and caring for them is about the same. These are probably the most popular of all skinks to keep in captivity, and you’ll find many breeders working with them today.

This type of skink is native to New Guinea and Australia, spanning a wide range of different environments within the region. As such, you’ll have to keep a blue-tongued skink’s enclosure warm at all times to mimic the natural habitat where they come from. They also require quite a bit of space since these reptiles can easily achieve lengths of 2 feet when fully grown.

Feeding a blue-tongued skink requires a combination of plant matter and insects. These skinks are omnivores, and they thrive when eating a wide variety of fruits, vegetables, insects, and even small invertebrates.

All three of these subspecies are popular as pets. Caring for them is all relatively equal, and they’re considered to be easy pets to take care of. They’re named after the five distinct lines that run down the sides of their bodies and their bright blue tails. Males will remain vibrant and colorful their whole lives, but females’ coloring generally fades with age.

You’ll mostly find blue-tailed skinks in moist areas, though they will inhabit a wide range of different environments. Often, they’re located in or near mixed forests, but you’ll find them all around in their native regions. While they’re mostly terrestrial and will spend a great deal of time on the ground, Blue-tailed Skinks are also great climbers that will climb up walls, trees, rocks, and other obstacles to avoid danger.

Fire skinks are some of the most vivid and colorful of all skink species, and many think of them as the most beautiful. As you might guess from the name, these are bright red skinks with incredible patterning of yellows and oranges that look very similar to fire. Incredibly, the skink’s mood can even affect their coloration, with hues darkening or lightening with the skink’s feelings.

These skinks are almost completely terrestrial, so they need large terrariums with plenty of floor space. Once mature, fire skinks are about 15 inches long on average, so you’ll need a 40-gallon aquarium or larger to house an adult. They’re native to tropical regions of West Africa, so they require a good deal of humidity as well. Habitats must remain between 80-95 degrees F, but other than getting the conditions correct, caring for a fire skink is quite simple.

Fire skinks have exploded in popularity as pets. This is largely due to the fact that they’re one of the skink species that become well-adapted to handling. Many captive specimens can even be fed by hand! You just have to make sure you never drop it or grab its tail. They’re not aggressive, exhibiting a milder temperament, and often seeming to be a bit shy.

The monkey-tailed skink is so named because it has a prehensile tail, which means that it can use its tail to help grab onto the branches on which it climbs. Naturally, this indicates that the monkey-tailed skink prefers to spend its time in the trees, rather than on the ground like many other skinks. Of course, that’s far from the only special trait this species sports that sets it apart from other skinks.

Monkey-tailed skinks are actually very unique. Unlike most skinks, these lizards are strictly herbivores. They eat just plant matter, no insects or invertebrates. This makes them an ideal choice for anyone averse to the idea of handling feeder insects on a regular basis. These skinks are also nocturnal, so you can expect to miss out on a great deal of their activity.

Monkey-tailed skinks are rather social skinks. In the wild, they sometimes live in small colonies known as a circulus. However, these are very large lizards, reaching sizes up to 30 inches as adults! Trying to keep a circulus would require insane amounts of space. Within the circulus, skinks care for the offspring as a group. These skinks are ovoviviparous, which means their eggs hatch within the body after gestation and young are born live. Babies are usually born solo, though, on rare occasions, two can be born simultaneously.

Red-eyed crocodile skinks have an incredible appearance, with red rings around the eyes and armor-plated bodies that make them look sort of like wingless dragons. They reach just 8-10 inches in length when fully mature, so if your space is limited, a red-eyed crocodile skink could be a great choice.

These skinks are native to Papua New Guinea, where they inhabit tropical forests. In captivity, you’ll need to mirror these conditions with daily temperatures in the high 70s to low 80s and high humidity levels around 70%. They love to climb, so you’ll need an aquarium that’s taller than it is wide or long.

Red-eyed crocodile skinks exist in the pet trade, but they’re not all that common. Still, if you look, you’ll find one, but they’re generally a good bit pricier than other skinks that are more commonly kept as pets. Still, these skinks do make excellent pets, so long as you’re willing to shell out $200-$300 for one.

Thick, full-bodied skinks that reach an adult length of around 13 inches, Schneider’s skinks are a lesser-known species that make excellent pets. They’re rather colorful skinks, with a lighter underside and darker top side that’s covered in splotches of yellow and orange.

Schneider’s skinks come from dry, desert regions. They need large enclosures with ample space since they’re terrestrial lizards. Bright lights are necessary with ample places to hide. As carnivorous reptiles, these skinks live on a diet that mainly consists of insects, though they’ll eat just about anything that moves and is small enough to fit in their mouth.

The unfortunate part of keeping a Schneider’s skink is that most of the specimens on the pet market are wild-caught. This makes them a bit flighty and timid when you first get one. However, they’re rather adaptable reptiles. Many of them become accustomed to handling quite quickly and turn out to be docile and handleable pets.

If you decide a skink is the right pet for you, there are many different species for you to choose from. The six on this list represent the best choices for pets, and each of them has particular characteristics that make them better suited for certain situations. Hopefully, you’ve found one that calls to you and will make a good fit for your next pet!

Which is More Important: Technical Photography Skill or an Artistic Eye?