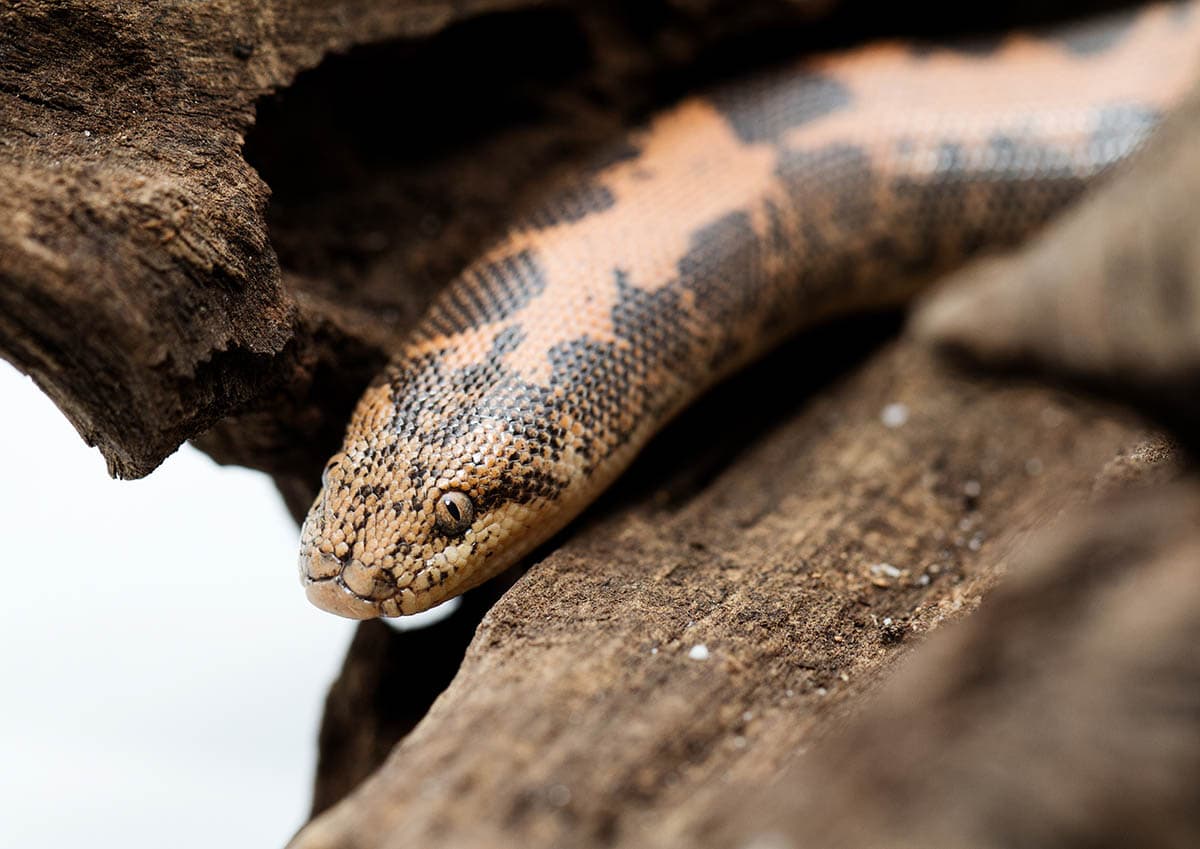 If you have never had a pet snake, the Kenyan sand boa is a good breed to consider.

The Kenyan sand boa is native to northeastern Africa. However, they are popular pets all over the world. The Kenyan sand boa is known to have a docile nature and generally doesn’t mind being handled by humans. These snakes are small with males ranging from 15 to 18 inches in length and females 25 to 30 inches. Their bodies are thick and they have short tails.

The Kenyan sand boa is not venomous. It can also be kept in a fairly small enclosure. Usually, a 25 to 30-gallon tank will be sufficient.

The usual color of Kenyan sand boas is yellow or orange. They have dark brown blotches along their sides and backs. These blotches are also known as saddles. Their undersides are white or cream.

Because they are fairly easy to care for, the Kenyan sand boa is frequently bred in captivity. This has resulted in many different morphs of the species. A morph is a change in color or pattern.

This list of 15 Kenyan sand boa morphs will familiarize you with the unique colors and patterns of these snakes.

The Albino Kenyan sand boa is one of the more common morphs. Albinism in snakes means they do not produce any black pigment. This results in a snake with lighter colors and blotches. Their colors can include yellow, pink, lavender, and orange. Unlike some of the other morphs mentioned in this list, albino sand boas can be found in the wild.

The Albino Paradox is named for the random spots of pigment scattered across their scales. The primary color is usually a pale orange or pink. The number of spots varies by snake. These dark blotches or speckles are the only dark pigment on an otherwise pale snake.

Like the other Albino morphs, the Albino Stripe Kenyan sand boa is very pale, usually white or cream. The distinguishing feature of this snake is the yellow, orange, or cream stripe running down its back.

The Anerythristic morph is unique in that they have no yellow or orange pigment in their scales. These morphs are all white with black, dark grey, or dark brown blotches. The dark against white makes for a very interesting snake.

Like the Anerythristic morph, this snake has a white body with darker blotches. The difference is the paint variety has smaller spots, allowing more of the white to show.

The third Anerythristic type of Kenyan sand boa is the striped version. Unlike the other two Anerythristic boas, the striped variety’s main color is black, dark grey, or dark brown. The snake also has a lighter grey stripe that runs down its back.

The Calico morph has the look of a calico cat in snake form. It has an orange body with randomly overlapping black and white blotches. The underside of the snake is cream or white. This morph is less common than some of the others.

The Dodoma morph is different from many of the others mentioned here because it was not the result of captive breeding. Instead, the Dodoma developed naturally in the wild. This morph was found only in Tanzania. Its saddles are round, rather than random blotches.

The Nuclear Kenyan sand boa is the morph closest in appearance to the standard version found in the wild. It has an orange body with dark splotches. The difference in this variety is the intensity of the orange color. It is much brighter than the regular sand boa. Breeders note that mixing this variety with other morphs can make the colors of the offspring more intense and brighter.

Scales that change from orange to brown to white in a gradient-like pattern make the Rufescens sand boa morph stand out from the rest. This variant does not have splotches or saddles. Instead, they are orange on top, shift to brown in the middle, and are white on the underside.

The Snow morph is another white-bodied sand boa. This version has pale pink, yellow, or tan blotches. Its most defining feature is its eyes. They are a deep red.

The Snow Paradox sand boa is similar to the snow version with the white body and pale saddles. Like the Albino Paradox, this morph also has dark specks randomly scattered across its body. These speckles are a sharp contrast to the light color of the rest of the scales.

The Snow Stripe morph is one of the rarer varieties. They have a pale pink body with a bright, white stripe down their back.

Unlike the snow stripe, the regular Striped morph is very common. It is often used to breed other morphs. The body of the striped sand boa is usually a dark brown. The stripe running down its back is uneven and bright orange.

The last variety is the Yellow Snow morph. This snake is believed to be a cross of the Albino and Snow morphs. It has a white body with yellow or orange-yellow saddles.

If you are ready to dip your feet into the pet snake waters, a Kenyan sand boa would be a great option to consider. These snakes are available in many beautiful colors and patterns. They are generally docile and easy to care for, making them an excellent choice for first-time snake owners.