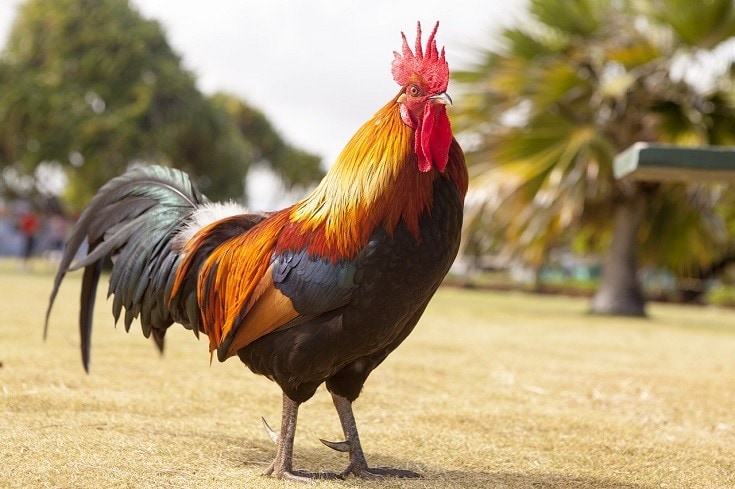 Sometimes roosters can be mean, especially if you threaten their flock. It’s nothing personal; it’s just business for them. Naturally, they are wired to be defensive of their territory and flock. But the aggression can sometimes get out of hand. This probably has you wondering, how do you deal with aggressive roosters? Read on.

Why Do Roosters Attack?

In most cases, the attack tendencies come to life when a rooster is defending the flock against another rooster, searching for hens to mate with, and when there are imminent threats from predators.

Rooster’s aggression usually increases during springtime, when the mating season is beginning. Some signs of aggression you should watch out for include:

What Are the Signs a Rooster Wants to Attack?

When a male wants to attack, it will not keep calm. The following are some signs that trouble is coming:

Is There a Form of Training That Guarantees a Calm Rooster?

There is no training that guarantees a calm rooster. Some breeds will still produce an aggressive rooster regardless of how well you handle them. Again, just like humans, every rooster has their own temperament.

While no training can suppress a rooster’s hormones, instincts, or temperament, some roosters are known to respond well to specific training by certain individuals. If possible, get a mellow rooster from a well-known mellow breed.

How Do You Deal with Aggressive Roosters?

The following are some things you can do to deal with an aggressive rooster.

Protect yourself as you deal with your rooster by wearing the right clothes. Tall boots and thick jeans, and a pair of gloves will suffice. Ditch shorts and sandals as you might be injured on your legs. Adequate protection allows you not to react in fear and makes you handle the rooster easily.

It’s scary to deal with a rooster that has 3-inch spurs. But even in such a scenario, be brave and don’t back away at all. If you show signs of fear or weakness, the rooster will likely become more aggressive.

3. Spend Some Time In Their Territory

Perhaps the rooster’s reason for the attack is because they are not familiar with you. Let the rooster get used to you in its territory by spending time around it. Deliberately hang out in the coop, but ensure you wear the right clothes, just in case things turn ugly.

4. Pick Them Up and Hold Them

This is another effective way to show dominance to the rooster. When he attacks, pick him up and hold him snuggly. Use a snug grip to hold the legs so that he doesn’t hurt you with his claws. Also, ensure the wings are secured; otherwise, he will fly away.

Walk around with him for around 20 minutes as you stroke his throat and gently talk to him. Then put him down and go on with your business. If he comes at you again, hold him and snuggle him again. Eventually, he will learn that he always loses when he launches an attack. But note that you may have to do this for a while before he is finally tame.

5. Give Him Some Treats

Bribing is a method most people use to deal with their aggressive roosters. Want to get along with the rooster? Some tasty food will take you right to his heart. Remember, he uses the same approach with the hens in his flock. So, if you give him treats, he realizes that he is below you in the pecking order.

6. Set Boundaries In a Gentle Way

Setting boundaries is another effective way of preventing rooster attacks. Carry a water spray bottle and when the rooster launches an attack, spray his face with water. This is safe and causes them no harm.

It will make the rooster think twice before attacking you every time he sees a spray bottle. Let your kids use this approach when dealing with such roosters.

This has also been proven to work out the rooster’s dominance issues. By bringing another rooster on board, you control the rooster’s aggressive behavior and balance out the dominance in the flock.

8. Be Aware of Your Surroundings

You need to know your surroundings when cleaning up, filling feed dishes, or walking out of the area. Watch your interactions with the flock, and avoid any environmental settings that the rooster may mistake as a threat.

9. Be Aware of Other People

You may teach the rooster who is the boss, but it doesn’t mean he will submit to all people. He will still perceive other people as a threat, including children, neighbors, and visitors. In such a case, every person must train the rooster to be subordinate to them.

But don’t allow a confrontation between the rooster and the kids because they may be seriously injured.

If none of the above ways works and you are worried about your children’s wellbeing,

you may consider rehoming it by giving it to someone with a larger land where the rooster can roam freely without causing harm to anyone.

How Not to Deal with Aggressive Roosters

When dealing with aggressive roosters, there are some reactions you must avoid; otherwise, the situation will get worse.

Whatever happens, don’t fight back, as he will keep coming back for more fights to battle for dominance. Again, don’t trigger his fighting instincts by running towards him. Instead, take some steps towards him till he backs up. Running towards the rooster is a sign of aggression and is not likely to make things better.

While you really want the rooster to know who the boss is, don’t hurt him. That will send a clear message that you truly are a threat.

While some breeds can be more aggressive than others, roosters can’t really be classified as dangerous. However, you must not allow such birds to interact with small children.

Some roosters are calmer than others, but they hardly make good pets. Roosters don’t enjoy being held. Hens are trainable but forget about training roosters, even if they are from the same breed as the hen. But if you are looking for good farm animals, consider roosters. They are easy to rear and are beautiful to look at.

Do Roosters Always Fight with Each Other?

Roosters usually fight other roosters who are trying to invade their turf. This is common with adult roosters who don’t know each other. The battle usually continues until one submits or dies.

However, roosters that are raised together can establish who is boss before hormones start raging. Also, a younger rooster introduced to an established flock has no problem submitting to the flock leader. But if age catches up with the leader, the younger rooster will attempt to take over the flock.

In light of all that has been said, do not allow the rooster to reduce you to his status by fighting him. It might not be easy to completely tame his aggression, but it is possible to deal with an aggressive rooster and earn his respect.

Related Read: 8 Ways to Stop a Rooster From Crowing Excessively

Are Liam Payne & Maya Henry Back Together? He Hinted At A Reconciliation

What has gone wrong with the All Blacks and can they fix it? | New Zealand rugby union team

A Glamorous Black Tie Arizona Wedding, 15 Years In The Making