Wolf vs Dog: What’s the Difference? 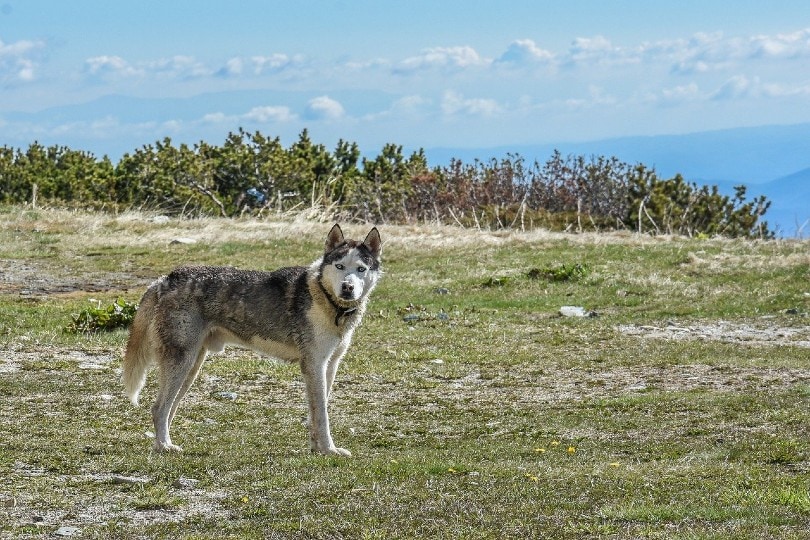 Have you ever watched your dog “wolf” down a meal and wonder to yourself if dogs and wolves somehow share lineage? Or how about when your dog takes its stuffed toy, shakes it so hard he’s hitting himself with it, and shreds it to oblivion? Some dog behavior reminds us of those canine predators in the wilderness.

All dogs are believed to have come from wolves, although the jury is out when it comes to how, when, and where exactly that happened. But even though this fact is true, dogs and wolves are not the same. In a short while, we will outline the differences and similarities between dogs and wolves.

The Grey Wolf as a species has so much controversy surrounding it lately, mainly because of the public attention some states have received about whether to reintroduce wolves to their local wildernesses or not. On top of that, they are mysterious, elusive creatures that get misunderstood often.

Wolves are best known for their howling that can strike fear in the hearts of those who hear it, due to horror movies. A wolf’s howl is simply a form of communication. Sometimes wolves howl to keep other wolves away, but it’s normally just a call and response, similar to how when one dog starts barking, the other ones around the neighborhood do too.

As extremely adaptive animals, wolves can be found almost anywhere in the world, and they have survived near extinction. Wolves like to live in plains, forests, and even deep snow. They grow up quickly, reaching maturity by 1 year old. Once they are adults, they have a keen sense of sight and smell, relying mostly on this for their hunting rather than speed.

Wolves hunt within a territory from 50 to 1,000 square miles. After finding and killing their meal (which is typically deer, elk, bison, and moose), they can eat up to 20 pounds of meat at one time! They do this because their meals are so few and far between.

Wolves are pack animals, with 4 to 9 members in each pack on average. Sometimes the packs can be as big as 30 wolves. They are incredibly loyal to their family, and will even risk their lives for each other if necessary. Within their packs, they are very social. When it comes to people, however, they are usually scared and will stay away.

Much of a wolf’s communication is through body language and all about making sure the hierarchy stays in place. For example, a submissive wolf will show that by crouching down, tucking its tail, whimpering, or rolling over. On the other hand, a wolf who is growling and tucking its ears back wants to fight.

Wolf mates typically stay together for life. They mate in the winter and have their puppies around April or May, and female wolves are pregnant for about 2 months. There are usually 4 to 6 puppies in one litter, and the mother hides these pups in a den (hole in the ground). Wolf puppies can’t see or hear when they are born. They nurse from their mother for 6 weeks after birth and are otherwise fed by regurgitated food from other wolves.

Wild wolves should not be kept as pets, and therefore do not have any training recommendations. Although wolfdogs and wolf hybrids have been bred for domestication can be trained at a young age, a pure wolf has deeply ingrained instincts that he cannot be trained out of.

Wolves are only suitable for the wild places they inhabit. A person’s home is no place for a wild wolf, and they should be left to roam free in the wild. Wolfdogs, however, are a different story and a different breed. When you get a wolfdog from a trusted breeder, it could make a good pet.

We all know that dogs are “man’s best friend,” and even though that might be the most cliche thing to say about them, there are no other words to describe dogs.

Dogs love their human companions and are as loyal as the day is long. Though this may be their most popular purpose for humans, it by no means is their only job title. Dogs are also therapy pets, rescuers from various disasters, drug sniffers, detectors of adverse medical conditions, and seeing-eye companions.

Just like their wolf ancestors, dogs have an incredible sense of hearing and smell. Compared to humans, their sense of smell is 40x stronger. It makes you wonder why, with this much smelling power, they can’t seem to figure out that they were the ones to pass gas!

Dogs have had us laughing and smiling for thousands of years. The first time dogs were domesticated from wolves was at least 15,000 years ago, maybe more. It’s thought that, back then, the more docile wolves were eventually domesticated into more like the modern dogs we know today. Because this was happening at different locations at the same time, different breeds emerged, and that’s why they sometimes look so different from wolves today.

Dogs’ personalities vary by breed and upbringing, but generally, they are playful, curious, sociable, and loyal. These dogs are called companion dogs. Certain breeds are known to be more aggressive, protective, and watchful. These dogs are typically guardian dogs, used for livestock protection or other specific work.

Over the years, dog breeders have taken liberties to pick specific personality traits and intentionally breed them to carry on the desired characteristic. Because people are so intertwined in a dog’s life, their first human interactions have a great impact on how their personalities turn out

All dogs with a healthy upbringing respond well to human interaction, from directive cues to affection. Dogs vary in how they interact with each other, though. Compared to how wolves operate very well in a pack, dogs do not have this same instinct.

Again, a certain breed of the dog plays a big factor, but most dogs typically have 3 to 8 puppies in a litter. Female dogs are pregnant for the same amount of time that wolves are, about 2 months.

Breeding is usually totally dependent on the dog owners unless an intact dog is allowed to roam around an area where other intact dogs are. Dogs can interbreed or be purebred.

Training dogs, compared to wolves, is totally attainable. Still, there’s a lot of money spent and made in dog training. Dogs can respond to basic human commands and can learn to do this at any age. Dog breeds who tend to be more aggressive or independent benefit more from training early on than later in the game.

Dogs are suitable for anyone with the ability to house, train, and exercise the dog according to the specific breed’s requirements. There are so many dog breeds that you can choose which one you’d like to meet your abilities, for example, there are more active dogs and less active dogs, friendly dogs and guard dogs, and so on.

Are Wolves and Dogs the Same Species?

Not exactly. Dogs and wolves share the same scientific genus name, canis, but not the species name. Dogs are canis familiaris, while wolves are canis lupus.

Like we have mentioned before, the modern dogs we know today come from wolves, and all dogs share an ancestor in the wolf, even though they look very different.

Differences Between Wolves and Dogs

Wolves and dogs have a lot of similarities because they are ancestrally related, but enough differences to set them apart. We’re going to outline all the differences we can think of.

Physiological Differences Between Dogs and Wolves

Behavioral Differences Between Dogs and Wolves

Dogs and wolves interact entirely differently with the world. The main difference here is in a wolf’s independence and a dog’s dependence. Wolves are tightly woven into their packs from birth (and it’s a big deal to change packs). Other than that, wolves think for themselves and don’t need or look for a human’s help. Dogs, though, commonly look to their humans when they need help solving a problem.

The breeding of dogs and wolves is also vastly different. Wolf pups are only born in the springtime, making them strong and able for when winter comes. Dogs are bred all times of the year since they have humans to care for them.

Similarities Between Wolves and Dogs

Wolves and dogs aren’t totally different. Here’s how they are the same:

A dog is hands-down the best choice between a wolf vs. a dog. Wolves are wild animals and are not bred for domestication like dogs have been. However, if you do love the look of the wolf, several dog breeds look like wolves or are closely related to wolves. And don’t forget about wolfdogs, which are a hybrid between wolf and dog.

Regular dogs, on the other hand, can give and receive lots of love and affection. When you think about it, we’re truly lucky to have a species coined as our best friends.

Jordin Horn is a freelance writer who has covered many topics, including home improvement, gardening, pets, CBD, and parenting. Over the years, she has moved around so much that there’s been no time to settle down and own a pet. However, as an animal lover, she dotes on and cuddles any pet she happens upon! She grew up with and dearly loved an American Eskimo Spitz named Maggie and a Pomeranian/Beagle mix named Gabby. She calls Colorado home, but has also recently resided in China, Iowa, and Puerto Rico

Jordin does not like to settle for the “easy answer” when it comes to living life with your pet. She loves to research the best methods and products out there and cut through the jargon so you can see plainly what something is or how something is done.

How to Leverage Your Customer Journey for Your Content Strategy