What Do Peacocks Eat in the Wild and as Pets? 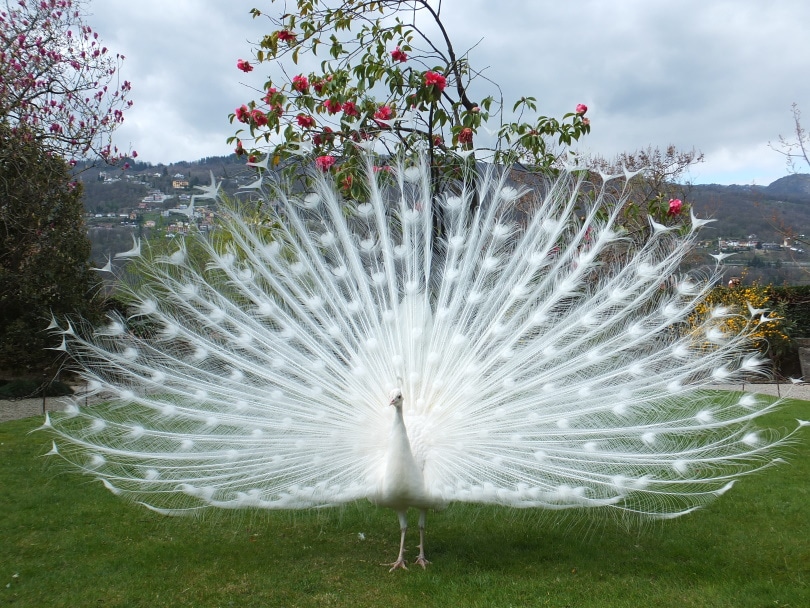 Peacocks — or peafowl, to be technically correct, as the term “Peacock” refers to males and “peahens” are females — are well known for their beautiful tail plumage and are commonly kept as pets on small farms.

Peacocks are omnivores and fairly opportunistic eaters. They will eat almost anything that they can find, including the morsels that they come across sifting through your trash can! In the wild, they will forage for seeds, insects, small rodents, lizards, snakes, and frogs, so you’ll want to mimic this variety in captivity because they need a diet high in protein.

In this article, we take a look at what Peacocks eat naturally in the wild and how you can mimic that diet in captivity. Let’s get started!

There are three different varieties of Peacock: the Indian Peacock, Green Peacock, and Congo Peacock, all of which have slightly varying diets in their natural habitat. While they are all omnivores and largely opportunistic feeders, their habitat dictates the majority of their diet.

As the name suggests, the Indian Peacock is native to India, Sri Lanka, and Pakistan and is predominantly blue in color. They are the most well-known variety, with some of the most striking plumage. They can be found in various habitats including savannahs, mountain ranges, and rainforests.

The Green Peacock has become endangered in recent decades and is found mostly in Cambodia, Vietnam, and Indonesia. They also inhabit many different environments, including forests, shrublands, and savannahs.

The Congo Peacock hails from the Democratic Republic of Congo (DRC) in central Africa and is one of the least known of the three Peacock varieties. They do not have the same striking tail plumage of the Indian Peacock, but their feathers are gorgeously colored nonetheless.

What Do Peacocks Eat in the Wild?

One of the primary and favorite foods of all Peacock varieties is insects. Peacocks are not picky when it comes to insects and will readily eat ants, grubs, crickets, worms, and even spiders. They can often be seen scratching in the dirt looking for worms and grubs, and even in captivity, when allowed to free-range, they will search for insects throughout the day.

Lizards, small snakes, rodents, and frogs are also fair game for wild Peacocks, and as long as it can fit in the Peacock’s mouth, they will likely eat it! These reptiles and amphibians are high in protein and provide essential nutrition for Peacocks. If there are enough around, they will make up a substantial portion of their diet. The same goes for snails and slugs. While Peacocks do eat flowers, they are mostly tearing the flowers up in search of snails!

Other important parts of a wild Peacock’s diet are fruits and vegetables. Any available tasty fruits will be a welcome treat for Peacocks, and they can also be found eating native vegetables and leaves. Most Peacocks will develop a taste for whatever fruit is available in their area.

What should you feed Peacocks as pets?

The diet of a captive Peacock should mimic their wild diet as close as possible, with as much variety as possible too. It’s a mistake to feed Peacocks on just grains or seeds as you would other birds, as they need the nutrients provided by insects, reptiles, and amphibians.

If your Peacock is free-ranging around your yard (as they should be) they will likely have access to plenty of tasty and nutritious insects and even some frogs, rodents, or lizards. This is not always the case, though, so you’ll need to provide them with supplemental insects occasionally just to be sure they are getting the protein that they need.

They’ll also need commercial food that is specially formulated for the species. If you cannot source Peacock food, a diet formulated for turkeys and pheasants will do. This commercial food should provide them with around a third of their diet overall, possibly more during winter months. Small amounts of dog or cat food are also suitable as an occasional high-protein treat if you are worried that they are not getting enough.

What should you avoid giving a Peacock?

Most human foods, in general, should not be fed to Peacocks. Most processed foods contain sugar, wheat, preservatives, colorants, and several other ingredients that are not healthy for Peacocks. Also, most of these foods are low in overall nutrition and can upset their fragile digestive system and should be kept far away from your pet Peacock.

Foods to avoid feeding your Peacocks include:

In the wild, Peacocks are opportunistic foragers that will eat almost anything that they come across and are not picky eaters at all. From seeds and insects to rodents, frogs, and even snakes, anything that can fit in a Peacock’s mouth is fair game. In captivity, you should aim to replicate this diet as closely as possible, with around a third of their diet being high-quality commercial food.