What Do Armadillos Eat? Everything You Need to Know! 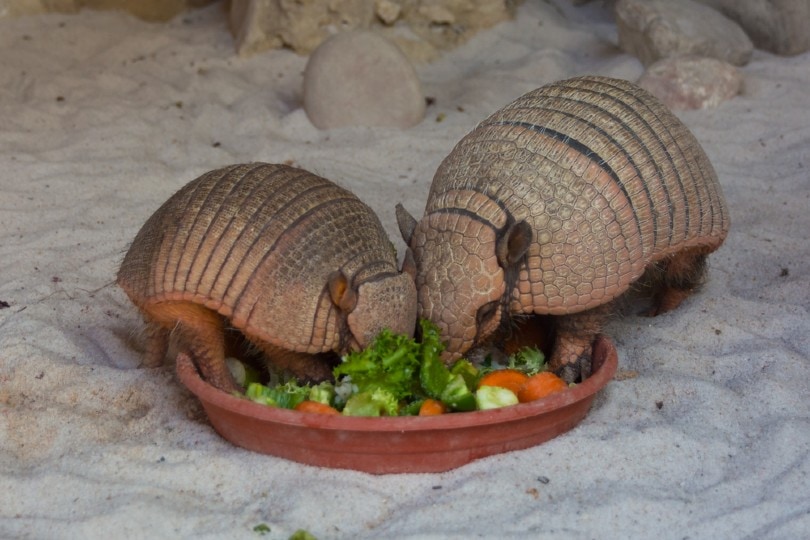 Armadillos are probably one of the strangest creatures you can come across in your backyard. Indeed, it looks like an amalgamation of a few other animals:

In short, it almost looks like a hybrid of a rat and a…hairy turtle!

With such a bizarre (yet so cute!) physique, it’s normal to wonder what these little critters eat. The short and sweet answer is: a bit of everything! Indeed, armadillos being omnivorous animals, they feed on animals and plants. Their diet is mainly composed of insects, earthworms, worms, spiders, butterflies, snails, rats, lizards, eggs, fruits, seeds, tubers, fungi, and even the occasional carrion.

The armadillo is a very particular land mammal that can be found in tropical and subtropical America. It has a triangular head which, like his body, is also covered with a protective plate. Its legs are short and terminated in long claws that allow it to dig the ground, make tunnels and caves in it. The general color of the armadillo ranges from dark brown to yellowish-brown.

Armadillos are solitary animals with generally nocturnal habits, although, during the winter, they move around during the day because they do not like cold temperatures. They live in sandy mountains, steppes with shrubs and tall yellow grasses, where they dig their burrows.

The life expectancy of armadillos in the wild is 7 to 12 years, but it is affected by changes in their natural habitat and hunting, as their meat and shell are of great commercial value.

Do All Armadillo Species Eat the Same Thing?

The armadillo belongs to the Dasypoda family, divided into three subfamilies: the Dasypodinae, the Euphractinae, and the Tolypeutinae. There are 21 species in total; so, do they all eat the same thing?

Yes, all armadillos eat essentially the same diet – insect, small invertebrates – except for three species, which feed almost entirely on ants and termites:

Where Do Armadillos Find Their Food?

Armadillos are burrowing experts: they dig their burrows like a mole, thanks to their short legs, which have curved, sharp claws. When not sleeping, armadillos use their powerful claws to dig other burrows, but not to make their nests: this is where they find an abundant source of insects, such as ants and termites. Their long, sticky tongue is their best tool for pulling these invertebrates out of their tunnels. They also use their excellent sense of smell to find food since their eyesight is relatively poor.

First, let’s keep in mind that more than 90% of the armadillo’s diet is made up of insects and larvae. They also feed on small invertebrates, such as earthworms and spiders. However, some species do not disdain the occasional delight of vertebrates, such as tiny frogs and, yes, even snakes!

Humans are its main predators, which hunt it mainly for its meat and shell. Its other natural predators are, depending on where the armadillo lives: bears, wolves, pumas, raccoons, dogs, and snakes.

What Is the Defensive Behavior of the Armadillo?

The answer to this question lies in the name of the armadillo itself: in Spanish, its name means “little armored one”. This armor is made of bony plates, called osteoderms, and protects it from predator attacks. But, contrary to popular belief, only the Southern three-banded armadillo and the Brazilian three-banded armadillo can, like the pangolin, turn into a ball. Fortunately, species that cannot curl into a perfect little ball can resort to their powerful claws, which are an amazing weapon against predators.

Is the Armadillo Endangered?

Unfortunately, according to the International Union for Conservation of Nature’s Red List of Threatened Species (IUCN), many species of armadillos are endangered. For example, every year at the Carnival of Oruro in Bolivia, the dancers wear matracas, or rattles, made from the bodies of Andean hairy armadillos. Destruction of their natural habitat, agriculture, and hunting are other man-made reasons for the decline of several species of armadillos.

Is It Legal to Have an Armadillo as a Pet?

No, having an armadillo as a pet is illegal. To be able to have an armadillo in captivity, you must have a special permit issued only to specialized establishments dedicated to the care and conservation of this beautiful primitive animal.

Besides, to legally adopt and care for an armadillo, you need a certificate from a zoological center. Despite this, animal protection laws are scarce or do not exist at all in many countries.

Therefore, it is not advisable to support this type of practice since animals like the armadillo need a wild ecosystem to survive and have a better quality of life.

1. The Armadillo’s Shell Inspired the Making of Better Body Armor for Humans

Armadillo shells, made up of bony plates and coated with keratin (the protein that makes up your hair and nails), inspired researchers at McGill University in Montreal to create a protective material from glass plates. The material was 70% more resistant to puncture than a plate of the same thickness.

But, despite reports of bullets ricocheting off armadillos, these creatures are not bulletproof. In fact, predators can usually break their shells quite easily. So, the armor of armadillos is more like a hard-shell suitcase than a bulletproof vest.

2. Humans Use Their Shell for Surprising Uses

3. The Armadillo Is a Symbolic Animal in North America

The armadillo is an animal symbol of North America, particularly in Texas, where it is present in large numbers and represents the official emblem of this state. According to Jamie Sams and David Carson, authors of the book Medicine Cards: The Discovery of Power Through the Ways of Animals, the armadillo is an animal-totem of Native American spirituality: “It helps us delimit what we accept to live, to define our space. It poses the barriers necessary for our balance while knowing to accept the external elements conducive to our development”.

The Armadillo is a vector of certain diseases; indeed, it carries several microorganisms that cause disease, such as the bacteria, Mycobacterium leprae, which causes leprosy. It is also a carrier of the flagellated protozoan of Trypanosomiasis Americana – better known as Chagas disease.

5. The Armadillo Is Among the Top Three Animals That Sleep the Most

Among the animals that sleep the most are the koala, the bat, and the giant armadillo. This one rests about 18 hours a day, just like the opossum and the python.

Also, note that the lion and the tiger are also passed off as animals that sleep a lot, but although they spend most of their time lying down, they are not in the top three of the sleepiest animals.

Although strange-looking, armadillos are peaceful and quiet animals that play an essential role in the ecosystem by keeping the population of insects and small invertebrates under check. If you ever encounter one of these bizarre creatures in your backyard, call a specialist who will help you put it back in its natural habitat. An armadillo will never harm a human (it’s quite the opposite), but it can do some damage to your yard by digging for its favorite food.

Genevieve is a biologist and science writer. Her deep love for capuchin monkeys, pumas, and kangaroos has taken her worldwide to work and volunteer for several wildlife rehabilitation centers in Bolivia, Guatemala, Canada, and Australia. As a Canadian expat, Genevieve now lives in Argentina, where she wakes up every morning to horses and cows saying hello from the vast plain next to her home office window. She is the proud mom of three rescued dogs, Lemmy, Nala, and Pochi, and a frisky kitten, Furiosa. Having the privilege of sharing her knowledge and passion for animals of all kinds is what makes her fulfilled and happy.