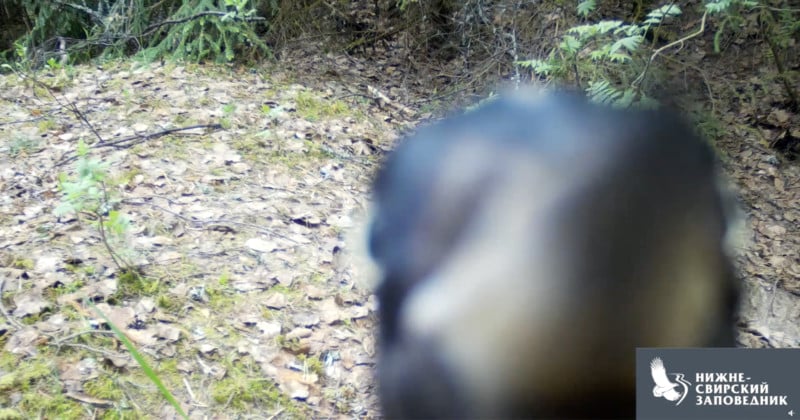 The Nizhne-Svirsky Nature Reserve in Russia has shared a video that shows a local black woodpecker methodically destroying a camera trap that was hidden in the trees.

In a post on Facebook, the Nature Reserve writes that the black woodpecker “easily” discovered the camera, despite its camouflage and spent several days attacking the camera as if it were a part of the tree.

Black woodpeckers are large woodpeckers that live in the forests of the northern Paleartic and is the sole representative of its genus in the region. It is closely related to the pileated woodpecker of North America and the lineated woodpecker of South America. Like other woodpeckers, the black woodpecker feeds by using its bill to hammer on dead trees in the hopes of pulling out ants or beetle grubs. It also uses this same skill to bore out holes in trees for the purposes of nesting. The species has a neck that has been specifically designed for this task and are quite strong, especially for its size.

The bird is sometimes considered a nuisance as they sometimes damage power lines, poles, and houses. In this case, one example of the species targeted the plastic housing of a wildlife camera trap.

In the video, the black woodpecker can be seen popping in and out of frame as its loud pecks can be heard through the camera’s microphone. According to the Nature Reserve, the “vandalism” — as it is cheekily referred– was attributed to the bird’s desire to remove any human interference with the personal life of the animals in the region.

Vandalism in the reserve! The black woodpecker decided that there should be no interference with the personal life of animals and birds on his site – and destroyed the camera trap. Zhelna easily discovered the camouflaged device, and for several days methodically picked out the hole she liked. Researchers who arrived to check the camera trap had to state with regret that it would not be possible to get new frames from this place for a long time.

In reality, the woodpecker may have chosen the location due to the softer nature of the plastic versus the surrounding tree and possibly mistook the camera trap for rotting bark, behind which a possible meal lay hidden.

The Nizhne-Svirsky Nature Reserve says that due to the damage, it is likely that it will be some time before the camera can be replaced and a view of that particular region can be restored.

What Role Does Artificial Intelligence Play in Content Recommendations?