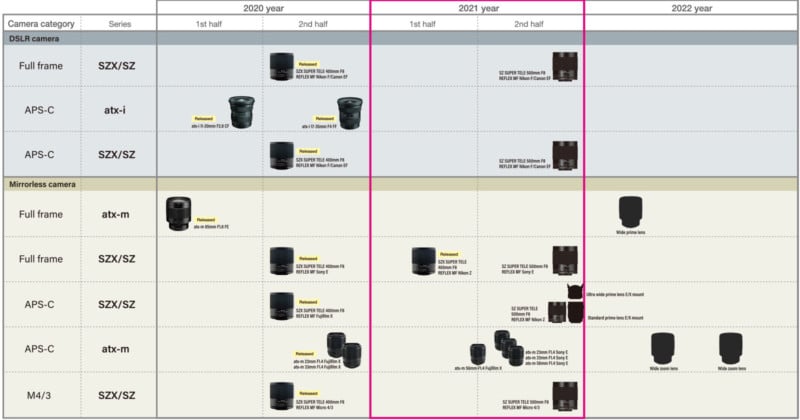 Kenko Tokina has published an updated lens roadmap that extends through 2022 and includes several lenses for a variety of camera mounts. Notably, the company plans to launch a 500mm f/8 reflex lens as well as six APS-C primes for a mix of Fujifilm X- and Sony E-mount.

Tokina recently updated its 400mm f/8 reflex lens that it announced in July of 2020 for both Canon RF and Nikon Z mounts. It originally launched for Canon EF, Nikon F, Sony E, Fuji X, and Micro Four Thirds. The upcoming 500mm f/8 reflex lens will be available again for those same original mounts, but also will include Nikon Z. Canon RF photographers will, unfortunately, have to hope Tokina treats the 500mm the same as it did with the 400mm and bring it to Canon’s mirrorless system at a later date.

Reflex lenses are extremely popular when it comes to telescopes, but are significantly less so for photography applications. Also called mirror lenses, a reflex lens uses what is known as a “catadioptric” design that combines mirrors and refracting elements into a single lens, which allows engineers to literally “fold” the optical path and magnify an image. The result is a lens that can be up to four or five times smaller than an optic that uses a more traditional camera lens design while also can completely remove chromatic aberration.

The downside of these lenses is that they do not generally support autofocus, the bokeh is “donut-shaped” and generally considered unattractive, and the lens design does not allow for variable aperture. Still, for those who don’t mind the look of the out-of-focus areas or manual focus, on-sensor stabilization has become pretty much a standard on new mirrorless cameras, which makes the lack of stabilization an easier pill to swallow. 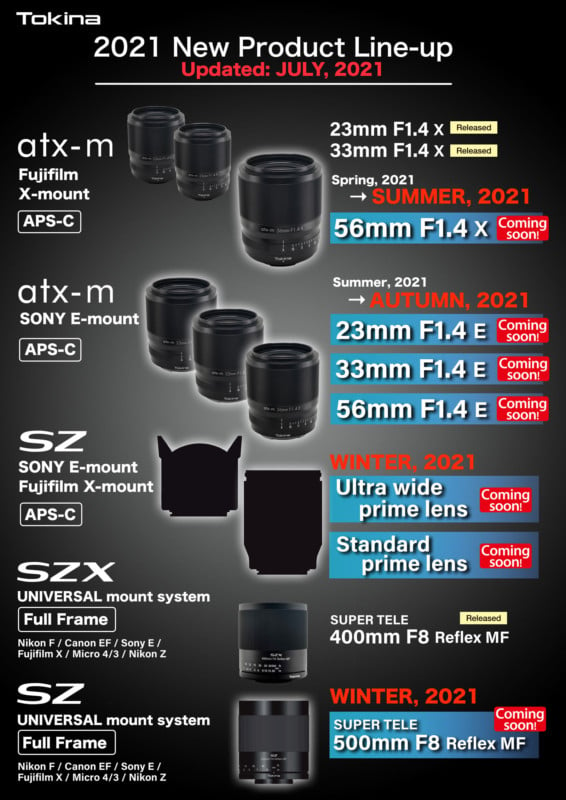 In addition to the 500mm f/8 reflex lens, Tokina has also promised that it will bring six APS-C prime lenses for a mix of Fujifilm X- and Sony E-mount by the end of the year: five will be available for E-mount and three X-mount. A 56mm f/1.4 for Fujifilm X-mount is due by the summer, postponed a few months from the company’s original target of spring. Three Sony E-mount lenses are also coming this fall, postponed from the original target timline of summer: a 23mm f/1.4, a 33mm f/1.4, and a 56mm f/1.4.

Both Fujifilm and Sony will also get an unspecified ultra-wide prime lens and a standard prime lens this winter. 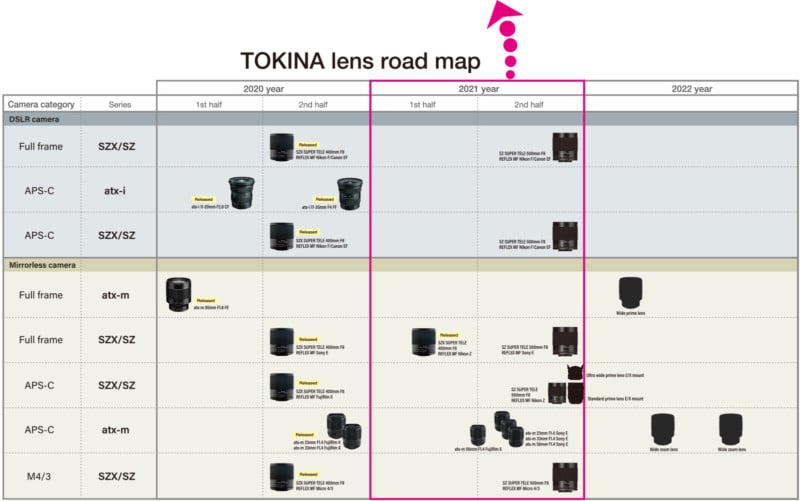 Looking beyond 2021, Tonkina says that it plans to release a full-frame wide-angle prime lens as well as two wide-angle zoom lenses for APS-C. The company did not provide any further details on its 2022 plans.