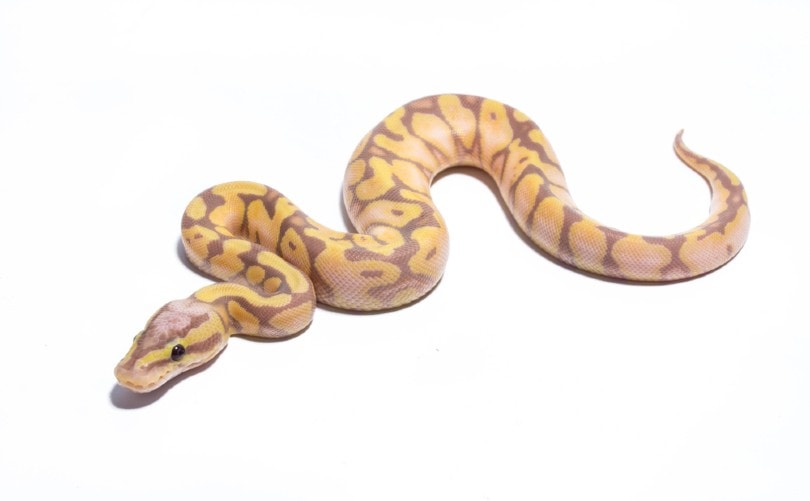 The Ball Python is currently the most popular pet snake in America, likely due largely to the many morphs or variations available for purchase. You can find virtually any color and pattern, and the Scaleless Ball Python is the rarest and most expensive. If you are considering getting one of these snakes but want to learn more about it first, keep reading while we discuss the ideal habitat, eating habits, lifespan, and more to help you make an informed decision.

Yes. The Scaleless Ball Python makes a wonderful pet that has few health problems and a long lifespan. It’s slow-moving so it’s easy to handle, and since it doesn’t make any sudden movements, it’s less likely to scare children and inexperienced visitors. Once you have the habitat set up, it’s easy to maintain, and the diet is simple, so you won’t struggle to keep your pet healthy.

As the name suggests, unlike most snake varieties, the Scaleless Ball Python has no scales anywhere on it’s body except for the ocular scales protecting its eyes. These snakes can retain the same colors and patterns as any other ball python but will have the smooth skin.

How to Take Care of a Scaleless Ball Python Morph

Most experts recommend purchasing an aquarium that’s at least 40-gallons. Larger tanks are even better and will allow you to create a more varied habitat that your pet can explore. In addition, your snake will require several hides large enough to fit your pet’s entire body so it can get some shelter away from the heat if it needs to. You will need a screen lid to add ventilation while preventing escape and as many branches and live plants as you can provide to give your pet somewhere to explore

Your Scaleless Ball Python will require heat lamps to increase the temperature in the habitat and provide a basking area your snake can use to get warm. However, you will not need UVB light, so your lighting system will be slightly less expensive than other reptiles and requires less frequent bulb changes.

Your Scaleless Ball Python Morph prefers temperatures in the high 70s with hot basking areas that can get as hot as 110 degrees. You can achieve these varied temperatures using heat lamps that send out directional heat and heating pads that will precisely place the heat where you need it.

Your Scaleless Ball Python doesn’t mind a fluctuating humidity, but it prefers when moisture in the air is above 50% and will require levels as high as 75% when it’s shedding to help the skin come off easier.

Coconut husk, aspen, hemp, and other moisture-retaining substrates are best for your Scaleless ball Python. These substrates are soft and won’t scratch your scaleless snake’s sensitive body, and they will allow your snake to dig, providing shelter and an additional hide.

Your Scaleless Ball Python will primarily eat pre-killed and frozen mice and rats. While it’s still small, your snake will eat primarily mice, but we recommend switching to rats once it’s big enough. Rats provide your adult snake with complete nutrition and are easy to feed than several mice. Ball pythons tend to get used to a single food and will reject others, so it’s best to get them started on rats as soon as possible. Since your Scaleless Ball Python eats the rats whole, it gets all the nutrients it needs and doesn’t require any supplementation.

It’s not difficult to keep your Scaleless Ball Python Healthy as it’s extremely hardy with an expected lifespan approaching 30 years. A warm area to bask and higher humidity levels when it’s shedding is all that’s required. Pre-killed commercial food is better than wild-caught food because there is less risk of transmitting parasites, and the commercial rats will be more nutritious.

Respiratory infections are the main health issue with your Scaleless Ball Python. A respiratory illness can clog your snake’s nose and mouth with mucus making it difficult to breathe. You will notice your snake holding its head up and breathing through its mouth. The snake may also blow bubbles or drip mucous. Respiratory problems can occur when the environment is too humid and cold, so keep an eye on your thermometer and hygrometer at all times and if you notice these symptoms, contact your vet immediately.

Your Scaleless Ball Python, like other Ball Pythons, can live a long life of 25 to 30 years. The best way to get the most time with your pet is to make sure the habitat is within acceptable limits and feed it a commercial food for optimal nutrition.

Once your Scaleless Ball Pythons are adults and ready to breed, you will need to lower the temperature in the aquarium to the mid-70s at night to accurately reproduce their natural habitat and allow the female to become fertile. Since these snakes are solitary animals, the male and female may take some time to notice each other and begin mating, so you will need to be patient. If you have access to a second male, temporarily adding it to the habitat as well will stimulate the males to seek out the female, shortening the time you need to wait.

Yes, the Scaleless Ball Python is extremely friends and doesn’t mind when you handle it, and its soft skin may be more pleasing, especially for children. In addition, these snakes move very slowly, so it won’t make an inexperienced handler nervous by slithering around their hand and arm, and it’s non-venomous, so there is no danger.

As long as you keep temperatures in the high 70s and 80s, you will not need to worry about your snake going into brumation. However, it will shed its skin every few weeks, and each time there is a potential for danger. If you don’t keep the humidity in the correct range, it will be harder to shed the skin. It can become dangerous if the skin around the eyes doesn’t come off properly.

How Much Do Scaleless Ball Pythons Cost?

Scaleless Ball Pythons result from a rare genetic mutation, so they are rare and expensive. At this time, you can expect to pay at least $2,000 for your new pet, with many owners reporting much higher prices. However, due to demand, more breeders are learning how to create them, and as they do, prices will come down.

The Scaleless ball Python is attractive, unique, and rare. It makes a great exotic pet for children and adults and is well suited to beginners. The habitat isn’t difficult to maintain once you get it going, and it can fluctuate a bit as long as you keep the humidity high when the snake is shedding. It moves slowly so it won’t intimidate new handlers, and it’s not poisonous, so there is no danger.

We hope you have enjoyed our look into this unique and rare breed and learned something new. If we have convinced you to seek out one of these snakes for your home, please share this guide to the Scaleless Ball Python on Facebook and Twitter.

Will Greg Be The Next Bachelor? All The Clues