Photographer Lights Porsche Sports Cars in the Desert with Drones 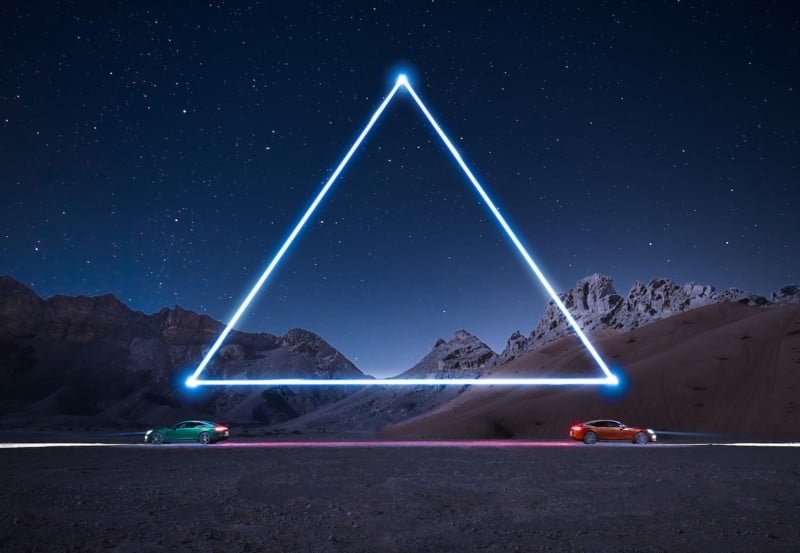 Afzal is an award-winning landscape and architectural fine art photographer and filmmaker based in the Middle East. Afzel tells PetaPixel that his journey into photography began in 2008 when he used his sister’s Cyber-shot camera for the first time and captured “the serene beauty of Margalla hills overlooking the city of Islamabad in Pakistan.”

His break into the commercial and advertising world started just a couple of years later in 2010 when he captured the interior and exterior of a large villa in Dubai for a local magazine.

Several years in the business later, the high-performance sports car brand Porsche — specifically its Middle East and Africa division — approached Afzal to create a photo series for its “Reflections of Passion” Panamera campaign. Afzal took that theme and turned around several concepts that he believed would illustrate Porsche’s vision. Afzal reveals to PetaPixel that he particularly enjoyed the creative freedom that he was given both as an artist and as a creative director to generate ideas for this particular project. 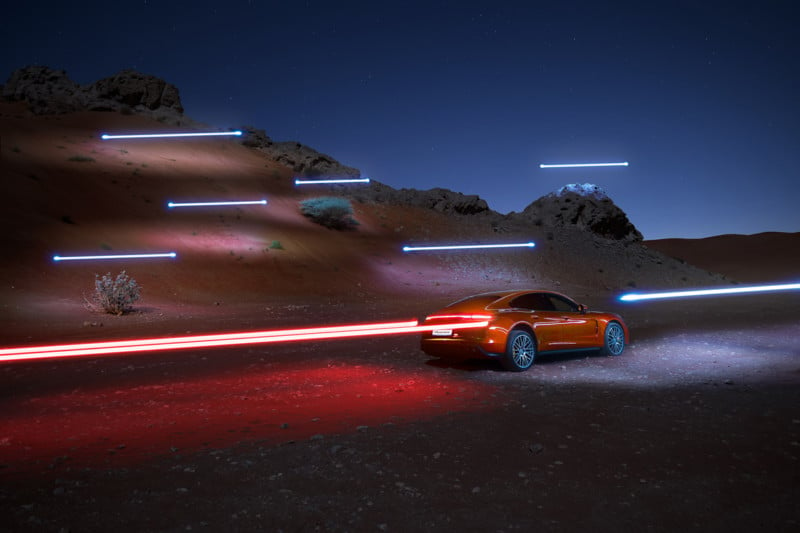 One of the ideas, inspired by Reuben Wu’s strikingly-lit landscape photos, was a drone light painting concept. The client loved the idea, and Afzal got right to scouting locations as well as planning the layout and design of its individual elements.

Afzal explains that the overall idea was “to create a sense of order in natural chaos and to be able to reflect the gorgeous contours of the Porsche Panamera in the process, too.”

Although Porsche was thrilled with the concept, Afzal ran into several issues during the shoot itself. The original plan was to take the images in the valley near Khor Fakkan, United Arab Emirates, and then move to Maliha desert to complete the rest of the planned arrangements.

What happened next is rather typical of commercial shoots: a group of situations did not go according to plan, and Afzal and his team had to adapt. The group had to completely switch the schedule on the day of the shoot after they realized the weekend traffic they would encounter would cause unavoidably long delays. For that reason, the team shot in the desert first and finished the shoot in the valley area afterward. 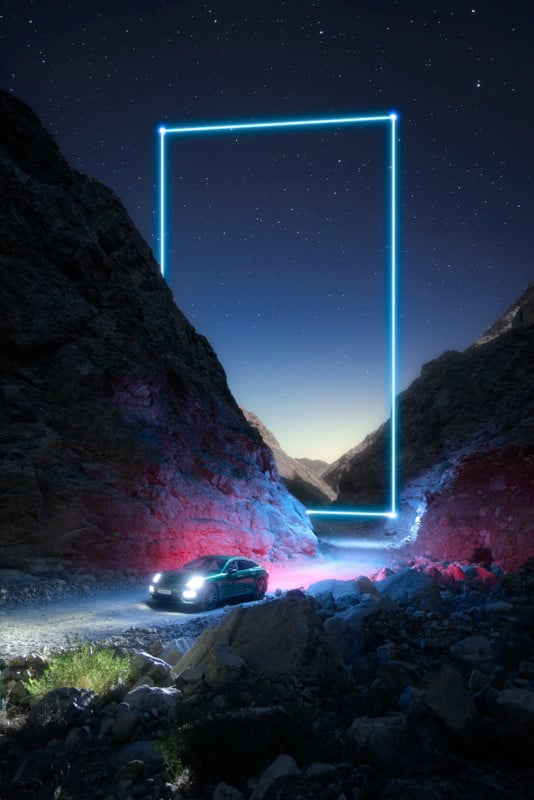 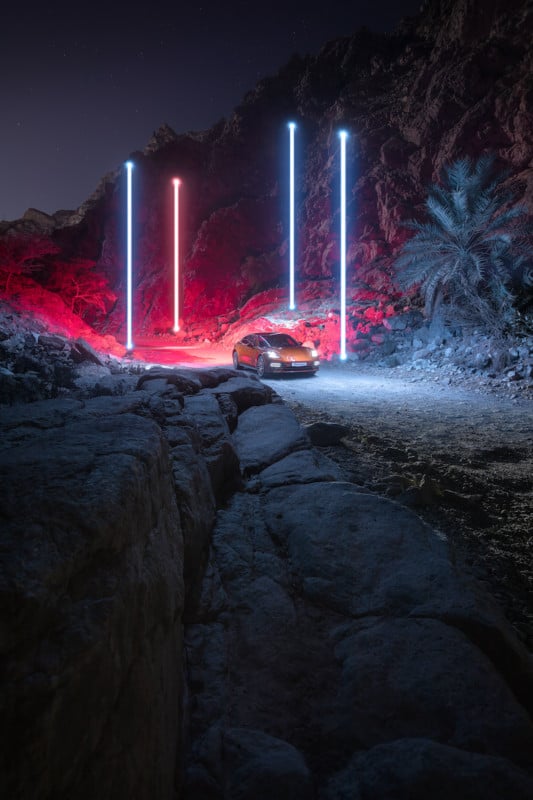 Another complication was signal strength: the GPS reception was poor in the shooting area. Afzal explains that it became at times challenging for the drones — which were critically important to realize the light painting designs — to either take off or to stay stable in the air due to the lack of signal. It was also nearly pitch-black dark out, which didn’t help as the drone sensors weren’t working correctly. Afzal and the rest of the team had to be extremely careful while flying the drones to make sure they remained at least five meters (5.5 yards) away from any terrain or vehicles.

Compounding on these issues, the team also encountered an unexpected tethering problem halfway through the shoot, which took them over 45 minutes to troubleshoot.

“I am just glad we managed to resolve the issue in that time since we had eight setups to cover in 10 hours,” says Afzal.

The photographer was helped by a drone operator Bachir, drone assistant Abdeali, and PA Feroz.

Despite the hurdles, the final campaign was successful in delivering eye-catching visuals and even won a Silver award from the One Eyeland Photography Awards 2020. Looking back over his career and achievements, Afzal recommends that other photographers who are looking to enter this industry rid themselves of any fear of “diving into the unknown territory or experimenting around because that is where you re-discover yourself and also separate yourself from the masses.” 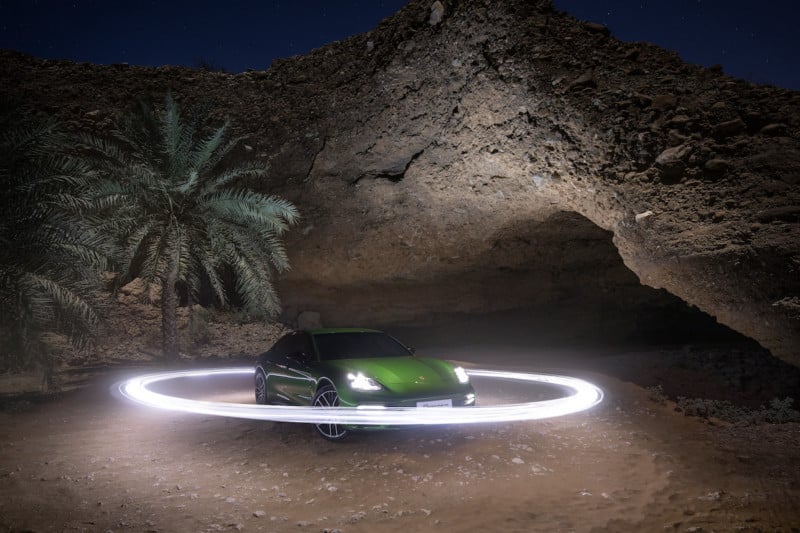 According to Afzal, being able to showcase something unique also gives photographers an edge when approaching potential clients.

“Most importantly, it is always best to come up with a concept pitch for the client before you engage with them,” he says.

Image credits: All photos by Baber Afzal and used with permission.

7 Things to Try During Your SL2 Test Drive