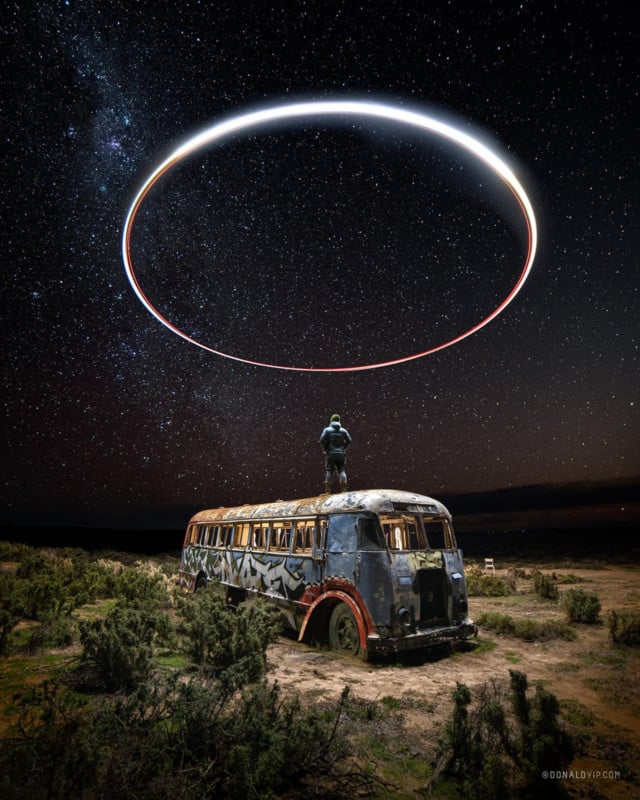 Yip, a travel photographer based in Melbourne, was in the area photographing a lake when he happened to find the broken-down bus.

“I stumbled across this bus while I was photographing at a nearby salt lake, called Lake Tyrrell in Victoria, Australia, with my friend [Christopher Chan],” Yip tells PetaPixel. “We found it while scouting for Milky Way locations and thought it would be a cool subject.”

Instead of capturing a “standard” photo of the bus illuminated in the foreground and the Milky Way in the background, Yip had the idea of trying his hand at light painting with a drone for the first time. The duo arrived at the location at sunset and began to set up with available light.

“The halo was done using a Mavic 2 Pro, and the built-in landing light on the underside,” Yip says. “It usually only comes on when landing the drone is low light, but I manually overrode this in the DJI Go 4 app to remain on.

“I then simply switched on the ‘Circle around a point of interest’ mode, and when I was happy with the radius and speed, let it fly automatically.”

Point of Interest is a mode in DJI camera drones that is designed to automatically capture a video while the drone circles a subject — it turns out this auto-flying mode is perfect for the creation of light-painted halos.

Photographer Reuben Wu helped pioneer the idea of these light halos with his project that featured massive halos above rock pinnacles.

“Each battery had a duration of 25 minutes or so, giving me plenty of time to experiment and set up the camera,” Yip continues. “The speed of the drone is important, as this dictates the angle it flies at in a circle; subsequently, this controls how much of the undercarriage light is seen by the camera.

“Not only does the light create the halo effect on a long exposure here, but it also illuminated the landscape and the bus. I was surprised with how soft the light was.”

In addition to the drone serving as the main light in the shot, Yip also used a small camping LED lantern inside the bus, an iPhone to manually light the bus wheel, and a flashlight to backlight Yip’s friend on top of the bus.

You can find more of Yip’s work on his website and Instagram. You can also purchase prints of his photos through his online shop.