Newt vs. Salamander: What’s the Difference? 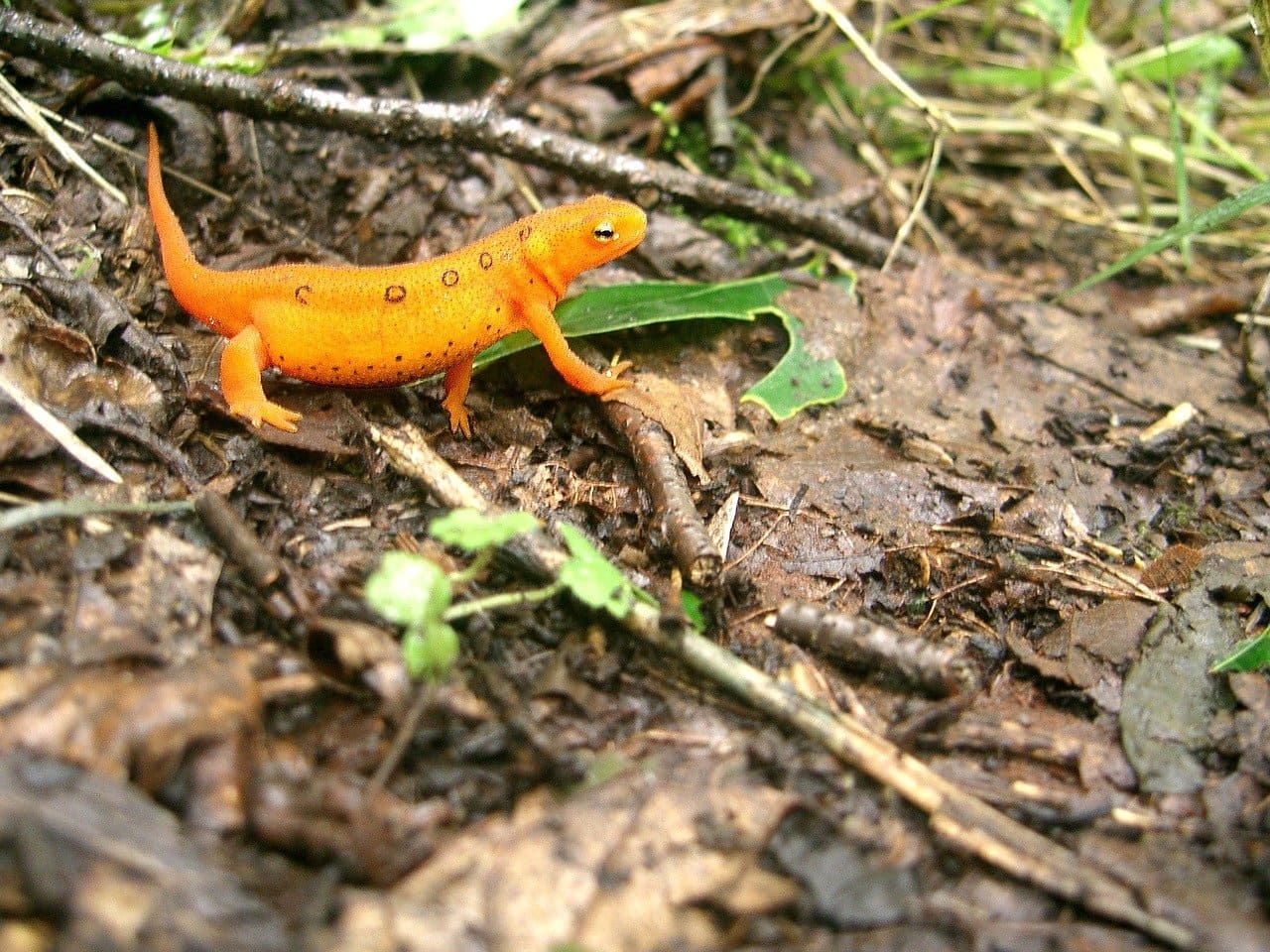 Most people think of dogs and cats when you ask about pets. However, many individuals get in touch with their wild side by getting an exotic animal, such as a reptile or amphibian. About 4.5 million households have a cold-blooded pet. If you’re thinking about getting one, you may wonder, what’s the difference between newts and salamanders?

The short answer is that a newt is a salamander, but a salamander isn’t always a newt. In fact, both words are general terms that describe larger groups of amphibians. Our guide will run down the similarities and differences between the two categories. We’ll discuss their care and temperament to help you make an informed choice.

We began our discussion by differentiating between newts and salamanders. Now, it’s time to talk specifics. Both animals are part of the Salamandridae family. There are 21 genera, with over 80 species. A common misconception is that newts are water-dwelling salamanders. While most prefer aquatic environments, that doesn’t apply to all species.

True salamanders are in the Salamandra, Chioglossa, and Mertensiella genera, albeit unofficially. Newts make up all the rest of them. As you can imagine, there is a lot of diversity between the two groups. Of course, you won’t necessarily find all species at your local pet store. The population status of many newts has declined in recent years, making many unavailable unless captive-raised.

A glass tank is the best option for housing a newt. The exact setup will vary with the species. For aquatic animals, you can outfit like an aquarium with a 3-inch substrate base. Newts live in shallow water in the wild, typically under 12 inches deep. Your tank can provide a similar environment. You can create a small island with rocks within it so that your newt can get out of the water occasionally.

You will also need a filter to remove waste and debris. A box or corner filter is ideal. While power filters are effective, they also require openings on the top that will provide escape routes that your newt will likely use. That makes a hood a must-have. You won’t need a UV light or filter unless you want to breed your newt.

Since newts are prey species in the wild, it’s essential to provide hiding places for your pet. Remember that these amphibians are nocturnal. You may not see them moving around a lot during the day, particularly if you keep them in a well-lit room.

Newts are carnivorous, but they aren’t picky eaters. You can feed various items that you can collect outdoors or buy at a pet shop. They’ll readily take earthworms, live cricket, and bloodworms. Many species aren’t as keen on frozen foods or commercial diets. Most store-bought newts are wild-caught and won’t recognize these unfamiliar items as something to eat.

Maintaining the water quality is your biggest challenge when keeping newts. The filter will certainly help. You should use a siphon to remove waste and debris. We recommend 25-percent water changes every 2–3 weeks, depending on the size of your tank and the newt species. Make sure that the water you replace is non-chlorinated or de-chlorinated using a product for fish.

Stable conditions are the key to keeping your newt healthy. Drastic changes can stress these animals and make them prone to disease. Like all amphibians, they are highly sensitive to water conditions. However, the most critical aspect of care is making sure your newt doesn’t escape from its tank.

Newts make an excellent pet for older children and teens for teaching them responsibility. The care is straightforward for most species. You’ll most likely find Fire-Bellied Newts at your pet store. They are relatively inexpensive, often costing less than $20. You can find rare and uncommon species online, with variable prices.

We’ve discussed the classification of newts and salamanders. Now, let’s address some physical differences. Newts have porous and sometimes bumpy skin, whereas salamanders have smooth skin instead. While many salamanders are terrestrial, they still depend on water for at least part of their life cycle since they’re amphibians.

Keeping a salamander is similar to that of housing a newt, using a tank or terrarium. Terrestrial species do best with shredded bark or soil as a substrate since they like to dig. While they need water to keep their skin moist, they don’t need the same setup with a place to swim like newts. A small dish will suffice. Hiding places are also essential to help your pet feel secure in its new home.

The most important factor is keeping the temperature consistent and cool. It will help maintain their skin health and avoid fatal dehydration. That makes the placement of the tank critical for salamanders. Avoid putting it near windows or heat registers. You may even consider moving its cage to the basement during the summer months.

Like newts, salamanders are carnivorous. They’re not fast animals, so they prefer slow-moving invertebrates, such as snails and worms. They’ll take many of the same food items as newts, with the same indifference to commercial products. You can feed your salamander as much as it’ll eat, taking care to remove any uneaten portions.

Temperature control and a healthy diet are the best ways to keep your salamander happy and content. That means cleaning its tank regularly and providing fresh food and water. Like newts, these animals are typically nocturnal. If you have a lot of hiding places, you may not see your pet often. We don’t recommend handling your salamander because of the mucus coating on its skin.

Salamanders will make delightful pets for adolescents and teens. We don’t recommend them for younger children who might be tempted to handle them. Their best purpose is as a teaching tool to learn about wildlife and their care.

We’d be remiss if we didn’t discuss a vital topic related to most newts and salamanders, their toxicity. These animals have several defenses against predation. We mentioned the mucus coating of the latter. These amphibians also produce toxins. The degree varies with the species. Often, it’s just enough to dissuade a predator from eating them. With others, it’s potentially harmful, if not fatal.

Some species can even hurt humans. Symptoms include numbness and irritation because of its tetrodotoxin content, something that pufferfish also produce. That’s one reason why you shouldn’t handle newts or salamanders. A stressed animal is more likely to release it.

Which Pet is Right For You?

Newts and salamanders are fascinating creatures. While their numbers in the wild are dwindling, you’ll still find captive-raised animals that will make excellent pets for older children ready to move on to advanced pet care. The correct setup with regular maintenance is vital for their health, no matter which one you choose.

Aquatic species will present a greater challenge in both these areas. They will require more equipment to house your pet, too. The best thing about these amphibians is that they are hardy when kept in the right environment. They’ll provide years of enjoyment for you and your family.

If You're A Worrier, You'll Wish You Knew About These 44 Things On Amazon Sooner

The Surprise Costs of Owning a Pet - The Pet Blog Lady