How Many Rabbits Are in a Litter? What You Need to Know 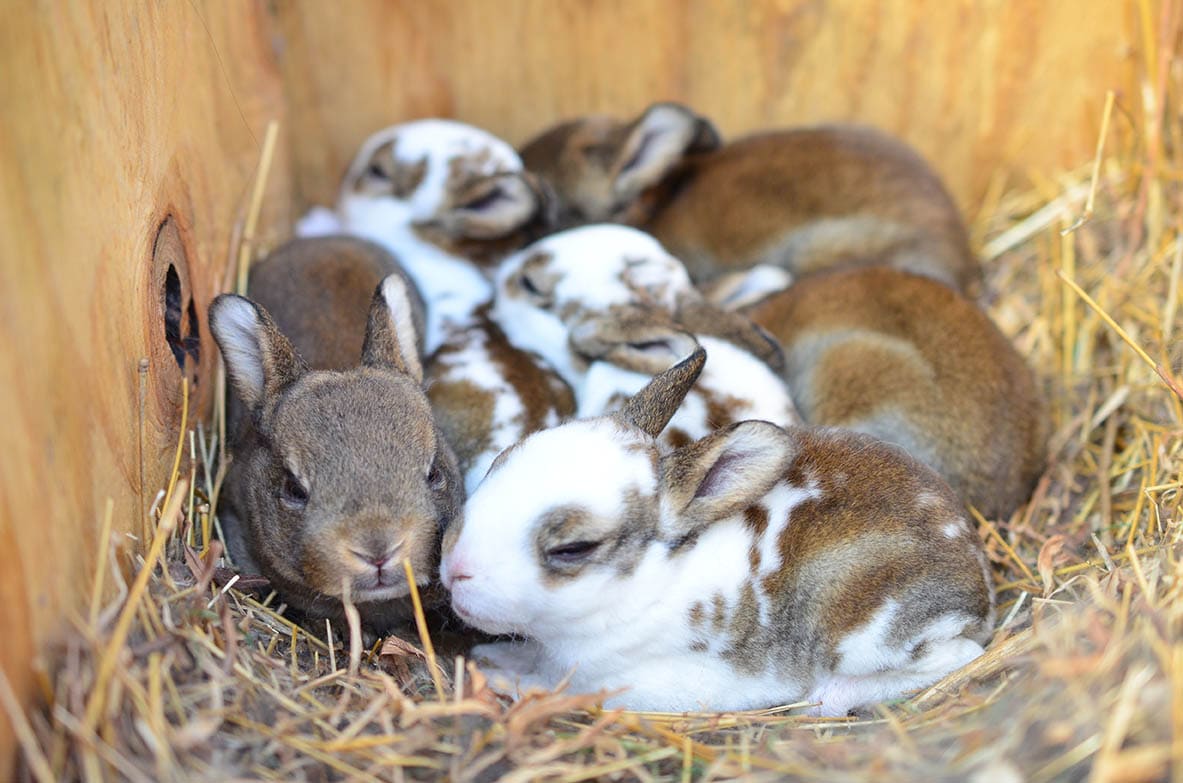 Rabbits are reputable rapid producers, and the phrase “breeding like rabbits,” which you must have heard somewhere, does not tell enough. Female bunnies can conceive at around three months old. After that, they stay pregnant for only 30 days, before they reproduce kits, and can fall pregnant again immediately!

A healthy female bunny can deliver up to a litter of 14 rabbits during each pregnancy, with the average being six kits. This means that a mother rabbit, also known as a doe, can have a litter of babies per month!

However, not all these newborns survive, even though does are self-sufficient mothers. For this reason, human caregivers may have to step in to ensure that the doe and litter thrive. Here’s everything you should know about rabbit breeding.

Rabbits sexually mature between the age of 3-6 months. An unspayed female bunny can start as early as 120 days old. On the other hand, a buck’s (or male rabbit) testicles typically drop at 10-14 weeks of age, allowing him to impregnate a doe at such a young age.

Female bunnies are prolific producers and can give birth to a litter monthly because of their short gestation period of only 28-31 days. This is why it is vital to separate your does from the bucks before the female gives birth to prevent another pregnancy.

How Many Kits Survive Out of a Litter?

Most does kindle late at night or in the early morning hours. Some baby rabbits will be stillborn, so be swift to remove and dispose of the dead kits and the placenta soon enough.

Don’t be surprised to see the mother eat the dead kits and the placenta. It’s not due to cannibalism but the doe’s safety-first approach.

She may eat the stillborn rabbits and her placenta to prevent predators from tracking their scent. Lack of a body means no scent, so no predation! Besides stillborn births, some kits can be born weaker than others and may not survive.

Female rabbits are not instinctively maternal and may ignore the vulnerably weak and young rabbits. They often prioritize those that are more likely to survive and focus on feeding and nurturing the stronger babies.

These animals have innate drives to preserve their species, and stronger kits have higher survival chances to breed themselves eventually. For this reason, does may separate their kits into two groups where they neglect the weak ones and concentrate on the stronger offsprings.

It would be best to help identify the weak ones, hidden at the farthest end of the nest, where they can’t access milk and warmth.

Mother rabbits do not mourn the loss of their newborn kits because they know they can replace them just days later. However, they are overprotective of their surviving offsprings and may react aggressively towards human caregivers who try to handle the babies.

You should provide your pregnant doe with a nesting box possibly by the 26th day of her pregnancy. However, you may notice the mother rabbit pulling out her fur and creating a nest for her offsprings days before she births them.

It would be best to offer the rabbit and its kits with a nesting box, though, to prevent the babies from scattering. However, these boxes come in various sizes, so it’s essential to get the right size for the particular mother breed and her babies.

The rule of thumb is to find a nest that’s large enough for the female bunny to turn its body in comfortably.

A larger den is cozier for the newborns to stay warm and dry. Don’t make the box too large, though, as the doe may start using it as a toilet, which isn’t healthy for the litter.

Factors Affecting the Size of a Rabbit Litter

Large rabbits tend to have a litter size of up to 14 kits, while dwarf breeds only kindle an average of just two kits. On the other side, medium-sized bunnies averagely birth up to 6 babies.

Large-sized breeds that give birth to large litter sizes include:

The number of kits you get per litter also depends on the litter number. A first-time mother rabbit’s litter size tends to be smaller and grows from the second birth onwards.

The more birth numbers, the more mature a doe gets, the more kits it produces. However, the litter size starts decreasing when the doe ages, and it continues to get smaller until the doe reaches its rabbit-bearing years.

A healthy doe has fewer risks of potential problems during pregnancy and birth, enhancing the litter’s overall health. In addition, a healthy doe is less likely to kindle stillborns, weak, or underweight kits that can die right after birth.

The litter size boils down to the parent rabbit mating process. The mating environment, such as the enclosure (the doe is taken to the buck’s cage), affects the number of times the pair mate.

The more they do, the more the number of eggs the doe releases, the larger the litter size. Also, where the doe lives when pregnant, stress levels, nutrition, hygiene, and predators play a huge difference in the fetus development, reflecting litter size.

A rabbit’s litter size varies from bunny to bunny, and overall kit health after they are birthed. Generally, it may take weeks before you get the accurate litter count because some may die in the process.

It’s best not to handle the kits for at least three weeks, and if you must, do it gently as the doe is most likely used to your scent. If it knows your scent, it may not attack you

The 5 Best Glue Guns For Crafts

How to Take Care of a Senior Dog