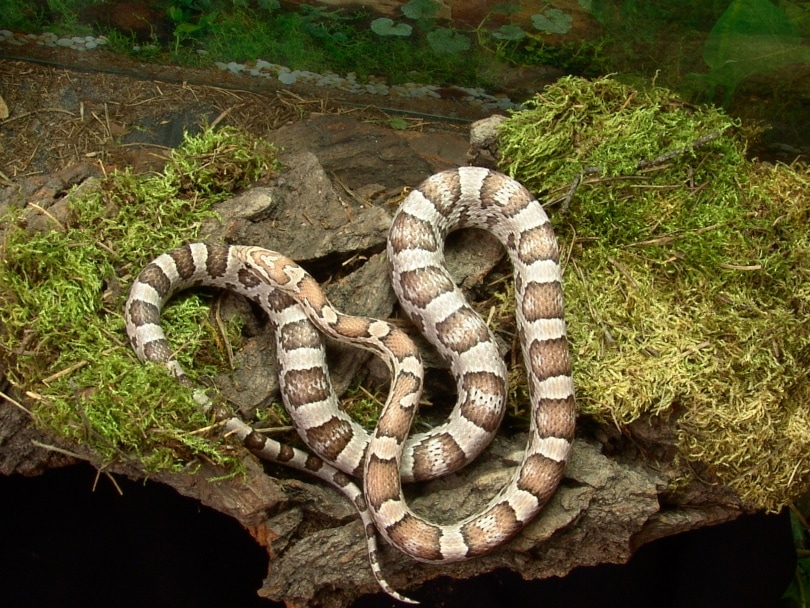 Corn snakes are very popular reptiles for keeping as pets, mainly because of their availability and easy care. Normal corn snakes that you might find out in the wild are generally red, orange, and brown with black markings. But thanks to concentrated breeding efforts, some wild new varieties have come into existence, including the Ghost Corn Snake. This snake lacks the red pigment that gives most corn snakes their color, but it also has reduced melanin, muting the black coloration to shades of gray. It’s a unique look, but underneath, it’s still just a corn snake.

Whether a Ghost Corn Snake makes a good pet for you or not is dependent on your personality. Corn snakes aren’t cuddly pets that you’ll curl up with on the couch. Not to say you can’t hold a corn snake, because you certainly can, but they’re not like dogs or cats. Your corn snake won’t interact with you in the same way, but if you understand that it can still make a great pet.

Corn snakes are rather docile, so they’re easier to handle than many snake species. They also tend to stay rather small, so they don’t have the larger space needs of some snakes. The Ghost Corn Snake in particular is also a beautiful sight to behold, making it a very fun pet to keep if you appreciate such things.

As far as corn snakes go, Ghost Corn Snakes are quite special in appearance. They lack the characteristic reds and oranges of most corn snakes. Instead, Ghost Corn Snakes are generally patterned in grays and browns. However, color can vary greatly between specimens. Some turn out a paler tan and white, while others are much darker with several shades of gray present. Still, others are a combination of muted tans and grays, making for a rather diverse selection of snakes under the same morph.

How to Take Care of Ghost Corn Snake

Corn snakes tend to stay smaller than many snake species that are kept as pets, so a 30-gallon tank is the minimum size needed for an adult. Granted, more space is definitely better, and your snake will certainly be happier in a 50-100-gallon tank instead.

You’ll need to provide several hiding places within your snake’s tank. Additionally, a few climbable items should be placed in the enclosure since corn snakes love to climb. But make sure that you properly sterilize anything before adding it to your snake’s environment. It’s essential to keep everything hygienic, which also means cleaning out the entire tank every month or so. Make sure to disinfect it and change out all substrates during this cleaning.

Lighting for a Ghost Corn Snake should mirror the daylight outside. If your snake is housed in a room with ample natural light, then you might not even need to provide additional lighting, other than for heat. But if your snake isn’t getting sufficient natural light, you’ll need to provide artificial light. Bulbs with UVA and UVB are best, as UVB can be beneficial for your snake’s health, though it isn’t 100% required.

Snakes need to regulate their own body temperatures, so you’ll need to provide a hot basking area and a cool area on the opposite side of the tank to allow your snake a temperature gradient. On the cool side, temperatures should remain around 75 degrees F. The basking area should be about 90 degrees F on the surface with an ambient air temp of 80-85 degrees F. Humidity should remain around 40%-50%, which is about average for most households anyway.

Aspen chips are often used as a substrate for corn snakes. Cypress mulch, orchid bark, and coconut fiber also make great alternatives. You want to make sure that there’s ample substrate for your corn snake to burrow into. A few inches should suffice. But make sure you avoid pine or cedar as a substrate, as these can cause neurological issues in reptiles.

Whenever feeding your Ghost Corn Snake, never offer food that’s larger than 1.5 times your snake’s diameter at its thickest section. This is how you can determine what size feeders to provide. Juvenile snakes will eat once every week or two. Adults only need to eat every two to three weeks. Corn snakes don’t usually get large enough to switch over to rats, so even adults will generally do fine on adult or jumbo mice.

Corn snakes are rather robust reptiles, so you don’t generally need to give their health too much thought. Provide sufficient care and clean living quarters and your Ghost Corn Snake should thrive. However, there are two semi-common health concerns that occur most often when these snakes are living in sub-par conditions.

Ulcerative Dermatitis – Also known as scale rot or blister disease, this illness results in many small lesions that look like blisters. If the blisters get infected, septicemia or skin damage could result, and in rare cases, it’s even fatal.

Dysecdysis – Essentially, this is when shedding goes wrong and some of the skin and eye caps remain stuck to the snake. Usually, this is a result of low humidity, inadequate temperatures, handling during shedding, or a lack of water for soaking.

So long as you provide sufficient care and an adequate environment, your Ghost Corn Snake should live for a minimum of 10 years in captivity. This would be incredible in the wild, but in captivity, there are no predators and far fewer illnesses. Many specimens even live for 20 years and more.

Breeding season for corn snakes begins in the spring after they’ve had a chance to wake up and warm up from winter brumation. This is when the male and female can be introduced for mating. Increasing the humidity in the tank can also make them more likely to breed.

After mating, it will be 4-6 weeks before the female will lay her eggs. Once laid, they’ll need 8 weeks of incubation at 80 degrees F in 80% humidity.

There are many reasons why corn snakes are some of the most popular pet snakes, and their docile, non-aggressive nature is a big one. These snakes rarely bite, and when they do, their teeth are so small that it doesn’t cause much damage. However, they do carry salmonella, so a bite can still be bad.

Ghost Corn Snakes are known to be easy handlers. They tolerate handling well and for long periods. Of course, your snake will have to get used to being handled and learn to trust you, but if you handle it often from an early age, your snake will be easy to handle for its whole life.

Unless your Ghost Corn Snake has trouble shedding, it won’t need your help. It might hide for a few days and stop eating before starting to rub itself against hard items in the enclosure, peeling off its outer skin. If your snake does have problems shedding, ensure it has plenty of water so it can soak and raise the humidity levels in the tank a bit to help the old skin come off easier.

You don’t have to brumate your corn snake unless you want it to mate. Brumation occurs from December through the end of February. During this time, the temperature doesn’t have to remain consistent, just don’t let it drop below 50 degrees F.

How Much Do Ghost Corn Snakes Cost?

Ghost Corn Snake prices vary depending on each snake’s coloration. In general, they’re rather affordable, with prices ranging from about $80 on the low end to around $150 for an exquisite specimen.

If you’re looking for a reptile that’s easy to care for, offers a long lifespan, and is uniquely beautiful, then the Ghost Corn Snake is worth considering. They’re even affordably priced compared to other snake morphs. Just know that you’re signing up for two decades of frozen mice and tank cleanings. Thankfully, corn snakes are great pets that tolerate long periods of handling, which is why they’re so popular.

7 2000s Fashion Trends No One Wants To Bring Back