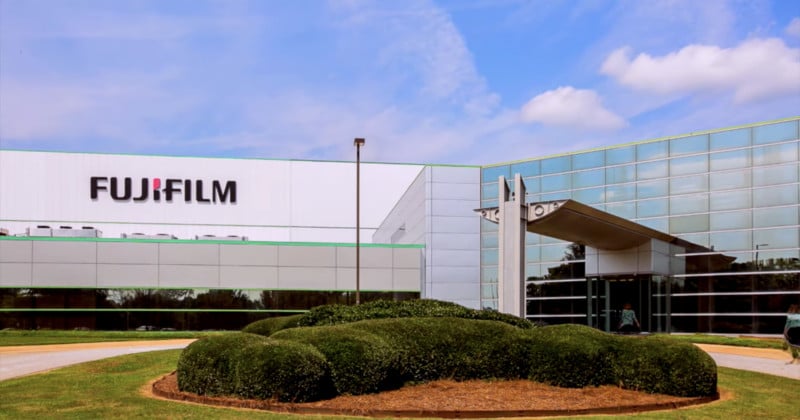 Fujifilm has announced that it plans to close four of its five Greenwood, South Carolina manufacturing plants responsible for a range of printing plates, inks, papers, and disposable cameras. The company cited declining demand, and 400 positions will be eliminated by the fall of 2022.

Fujifilm Manufacturing has been located in Greenwood, South Carolina since 1988 and the massive five-plant campus encompasses over 500 acres and represents a $1.8 billion investment for the company and currently employs around 500 people. According to Fujifilm, the giant campus is one of the company’s global manufacturing hubs with over 2.5 million square feet of space among five manufacturing facilities that produce QuickSnap recyclable cameras, inkjet photographic paper, color photographic paper, and digital printing plates.

That facility is set to shrink to just one-fifth of its current size by the fall of 2022 as Fujifilm consolidates manufacturing into just one plant and outsources all other work to third parties.

Employees affected by the news were informed Thursday morning before the public announcement.

“Market economic trends and a declining demand for many of the products manufactured in Greenwood challenged us to focus on how we adapt our efforts to continue to build a global, sustainable approach for Fujifilm,” Fujifilm Manufacturing President Todd Croker said to press.

According to The State, Fujifilm’s most recent financial reports mirror Croker’s statement, as revenue was down 5.3% and income was down 11.3% according to the fiscal year 2020 documents. Fujifilm had been expanding its footprint in Greenwood as recently as 2019, but The State reports that the coronavirus pandemic may have forced the company to reprioritize its efforts. Recent business decisions seem to support this belief.

On June 29, Fujifilm announced that it would invest $850 million into its Diosynth Biotechnologies division to increase the capacity to manufacture biologics which includes recombinant vaccines for COVID-19 and advanced gene therapies in the United States and the United Kingdom. The expansions will double cell culture production for recombinant vaccines in the United States. In the United Kingdom gene therapy production will be increased ten-fold, cell culture capacity will be tripled, and microbial fermentation output at the existing 5,000L scale facility will be doubled.

How The July 2021 New Moon Will Affect Your Zodiac Sign