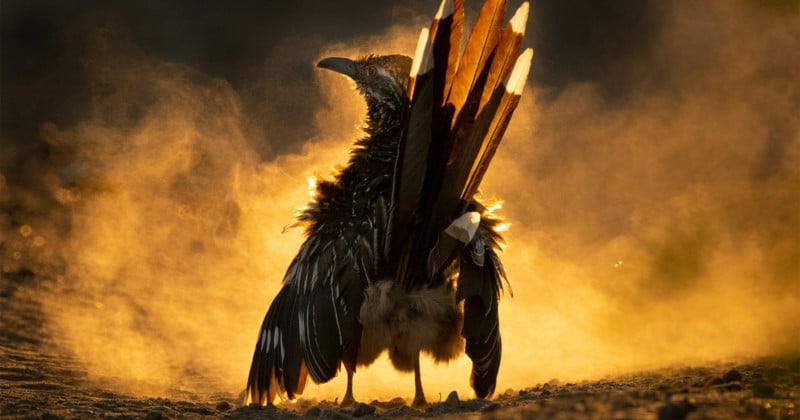 The National Audubon Society has announced the winning photographs and videos of its 2021 Audubon Photography Awards which showcase the beauty of birds and brings attention to species that are threatened by extinction.

National Audubon Society is a nonprofit conservation organization established in 1905 which works to protect birds and their habitat through various programs and in collaboration with other partners, such as nature centers, and more.

The competition — which is one of the leading North American bird photography competitions — featured eight prizes across five divisions and, for the first time, it awarded the Female Bird Prize and Video Prize.

The former was introduced to draw attention to female birds, which are often overlooked and underappreciated in both bird photography and conservation, the organization says. The second new addition, the Video Prize, was introduced to “illuminate unique and fascinating ways birds behave and interact with their environment.”

Below is a list of all awarded winners and honorable mentions at the competition: 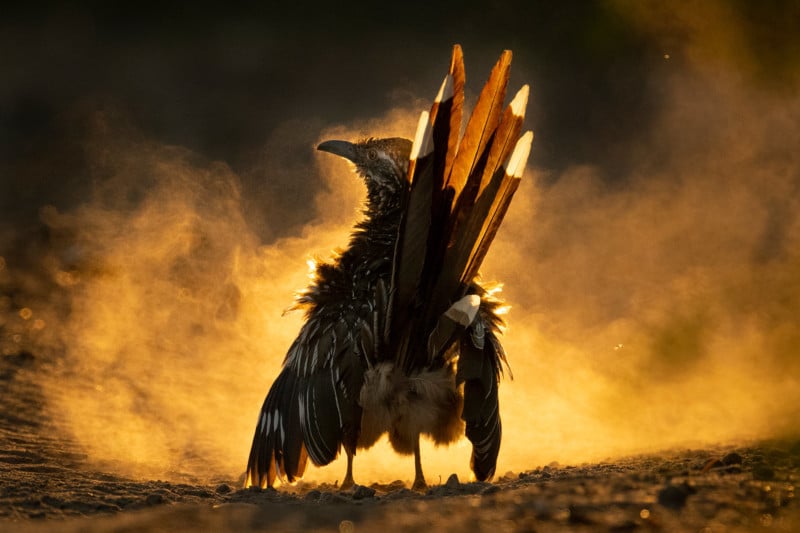 Carolina Fraser was awarded the Grand Prize for her photograph of a greater roadrunner, shot at Los Novios Ranch in South Texas. The winning image was taken on a blazing hot summer day just before sunset, and the photographer managed to capture the bird in golden sunlight as it took a dust bath.

This bird species have adapted to live on the ground in the dry country and can run considerable distances at 20 miles per hour. It derives the moisture it needs from lizards, rodents, and other prey unless water is available.

One of my favorite places to take photographs is among the oil pumps and open space at Los Novios Ranch in South Texas, where wildlife weaves through cacti and birds perch on fence posts. On a blazing hot summer day just before sunset, I found myself lying facedown at an uncomfortable angle, my elbows digging into a gravel path as I photographed this roadrunner. I manually adjusted the white balance until I captured the bird bathed in golden sunlight as it took a dust bath. —Carolina Fraser

On a bitterly cold winter day I went searching for eagles and Snowy Owls in rural Michigan. Cruising side roads, I noticed a Rough-legged Hawk perched atop a pine tree, but all I captured was its tail as it flew away. It was then that I spotted a male Northern Cardinal flying from plant to plant, feeding on the seeds, his red feathers reflected in the bright white snow flecked with ice crystals. I took the first shot when he took flight. By the second frame, the striking songbird was gone. —Steve Jessmore

For three years I’ve watched a pair of Sandhill Cranes that nest near my house, observing and photographing them from my kayak. On a blustery day this spring, I took my camera and paddled out to check on them. Two colts had finally hatched. The wind, though, made for a challenging photo shoot. There was no solid land to anchor to, and I bounced up and down, sometimes missing the birds completely. So I increased my shutter speed and ISO to compensate. Capturing this scene under those conditions felt like a once-in-a-lifetime moment. —Robin Ulery

I was searching for eiders, scoters, and other diving ducks along the Atlantic coast on a cold February day. Suddenly a Purple Sandpiper flock landed right next to me. The birds fed, chatted, chirped, and chased each other, occasionally fluttering up when the waves washed over the shore. As the weather turned gustier, the sandpipers preened and settled down amid the rocks. I lay down flat, close to the water’s edge. I positioned my camera, resting it on a rock, and focused on one of the Arctic visitors, the purple in its feathers highlighted by the morning sun. —Arav Karighattam

On an early July morning, I peeled the camouflage tarp off my canoe hidden in the marsh grasses along the edge of a small lake and stepped in, careful not to tip over. Paddling out amid the water lilies, I saw male Red-winged Blackbirds pluck dragonflies from the air to feed their nestlings. Females took a different tack: They hopped from lily pad to lily pad, plucking out insects inside the yellow and white flowers. I steadied my camera by setting it on my equipment bag, which was sitting on the floor, and shot away. —Shirley Donald

Over several days I watched a pair of Red-tails taking advantage of the strong early summer winds streaming down from the Rockies, hovering in midair while scanning the foothills for mice and ground squirrels. This one floated almost level with my lens. His head stayed still while his body moved, his wings and tail steadying him and his dangling feet acting as ballast. —Bill Bryant

I was waiting for Fernando the Chilean Flamingo to wake up from his afternoon nap. People have reported seeing the lone flamingo in the park since 2010, so I went out to photograph him. A commotion from the nearby water, where a Great Blue Heron stalked prey and a few gulls rested, attracted my attention. A Northern Harrier had come out of nowhere to hunt. I quickly adjusted my camera settings so I could get her owl-like face. This kind of unexpected encounter is why I always carry my camera when I venture into nature. —Elizabeth Yicheng Shen

For me, photographing feeding hummingbirds is a near-perfect combination of challenge and reward. In the spring, Anna’s, Allen’s, Rufous, Costa’s, and Calliope Hummingbirds—many of them adult males with glittering gorgets—sip nectar from purple pride of Madeira flowers in this preserve. When I looked through the photographs that I shot one spring day, this image of a relatively unassuming female, a juvenile Anna’s Hummingbird, immediately grabbed my attention. Though most of the bird is obscured by blooms, I caught that momentary flicker of eye contact through the petals. —Patrick Coughlin

I was hiking on a snowy, dark winter afternoon with a new camera and lens combination when a friend spotted a female Red-tailed Hawk. She flew out of sight, but we found her nearby jumping and grabbing leaves, trying to get her missed prey to reappear. When an eastern chipmunk ran from beneath the debris a few minutes later, the hawk quickly caught it and carried it to a tree. It was incredible to see that connection between predator and prey—one that I don’t usually get to share in a wildlife photo. —Steve Jessmore

I had heard that a pair of Peregrine Falcons had built a nest near a cliffside hiking trail in La Jolla, so on a spring day I set off with the hopes of photographing them. As I walked, the raptors made screea calls and circled above. I stopped along the trail and watched a bird that had snatched an Acorn Woodpecker, commonly found in the palm trees nearby. The raptor landed on a ledge littered with feathers from past kills and began plucking the woodpecker, the feathers fluttering over the cliff’s edge as it prepared its meal. —Tom Ingram

I was photographing Green-winged Teal when one extremely territorial Canada Goose charged another goose that attempted to land in the area. I positioned myself at the edge of the water and watched for signs of its next onslaught, taking a short sequence of pictures as the goose launched itself from the water to fend off the intruder. I was happy that some Green-winged Teal swam into the scene, their quiet feeding a marked contrast to the goose’s dramatic behavior. I guess the goose was determined to keep its corner of the wetlands all to itself. —Josiah Launstein

Here in western Washington, Anna’s Hummingbirds are year-round residents. In spring females collect nesting material. Because I have some mobility issues, I do a great deal of my photography right outside my door. Getting the right lighting is always a bit tricky, and timing the hummingbirds’ visits to my patio is always a guess, so I’ve become very patient and observant. One of my favorite subjects is the Anna’s as they collect cattail fluff. I find this hummingbird shows a certain elegance as she gently tugs the seed fibers from the cattail. —Karen Boyer

I spent a morning on northern Minnesota’s backroads searching for an elusive Great Gray Owl. A heavy band of snowfall was in the forecast, and I wanted to get footage of an owl hunting in the winter weather. After a few passes in my truck, I spied one sitting in a tree near the road. While the snow came down like crazy, I filmed the owl before it retreated to the woods to roost. —Brent Cizek

The competition was judged by an expert panel of bird photographers, videographers, and other experts, such as Sabine Meyer, photography director, National Audubon Society, Kathy Moran, deputy director of photography for National Geographic Partners, Allen Murabayashi, co-founder of PhotoShelter, and others. A full list of judges can be found here.

Each entry was judged on its technical quality, originality, artistic merit, and whether the photographer followed Audubon’s Guide to Ethical Bird Photography list, which was a must. The competition received entries from 2,416 photographers across 50 states, Washington D.C., and 10 Canadian provinces and territories.

The full list of winners and detailed information about each entry can be found on the Audubon website.

How To Get the Most Out of Twitter Threads

What is a gaming computer?