Do Orioles Make Great Pets? What You Need to Know! 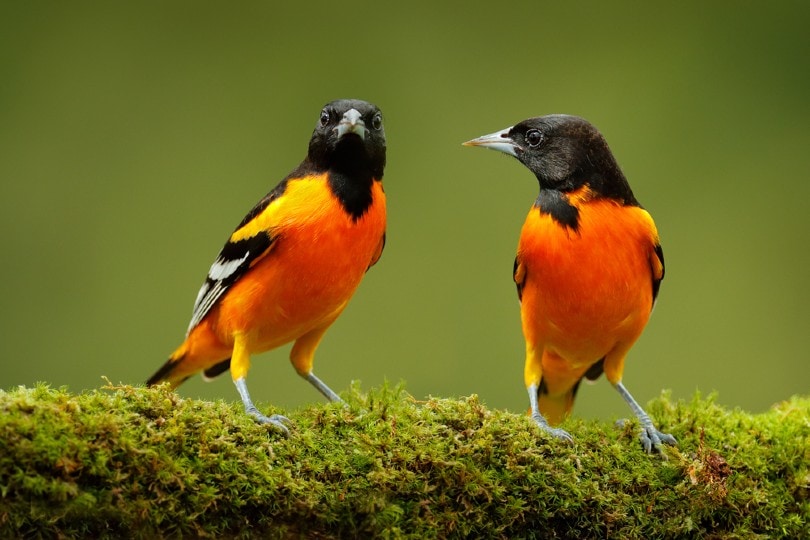 Orioles are beautiful backyard birds commonly seen throughout the United States and Canada. The word “Oriole” is based on several Latin words that all mean golden, and it’s easy to see why these gorgeous yellow and black birds were given their name. Baltimore Orioles are the most commonly found Oriole in the United States, but there are seven others that can be seen in the northern parts of the U.S. There are 30 different Oriole species in Southern America!

Since these birds are so common, it’s natural to wonder if they would make great pets. However, not only is it illegal to keep Orioles as pets in most areas, but they do not make suitable pets either. These are wild animals that have special needs that are difficult to provide. That said, they are easy to attract to your backyard, and with a bird feeder and delicious food, you can have various Orioles visiting your backyard daily!

Eight different types of Orioles can be seen throughout North America and Canada, all of which have similar golden plumage and a beautiful singing voice.

Found primarily throughout the midwestern and eastern U.S., the Baltimore Oriole has a beautiful orange and black coloration, similar to their close cousin, the Bullock’s Oriole. The two are so similar, they were once categorized as one species, the Northern Oriole, and the two variations often interbreed.

One of the most widespread Orioles in the western U.S., the Bullock’s Oriole can commonly be found nesting in tall trees next to rivers and streams. They were named after William Bullock and his son, famous for their ornithological work in Mexico in the early 1800s.

You may also be interested in: 12 Best Pet Bird Species (With Pictures)

Orchard Orioles are smaller than other Oriole varieties and are commonly seen throughout the eastern U.S. in summer. The males are easily recognizable by their deep brown chest coloration, as opposed to the normal orange or yellow of other Orioles.

Frequenting the southwest U.S., the Scott’s Oriole is easy to spot because they feed readily from nectar feeders. They have bright yellow and black coloring and are often found nesting in yucca plants, enjoying the sweet nectar from the yucca flowers.

Hooded Orioles are common along the eastern U.S. in the summer months, preferring riversides and backyards. Males have deep orange coloring, including the orange “hood” after which they are named. They often nest in palm trees, using the fibers of the leaves to make their nests, but they can be found in other tall trees too.

The Spot-Breasted Oriole is found mainly in Florida in the summer but is actually native to Central America. These birds established a population in Florida when they escaped captivity in Miami sometime in the 1940s. The males and females look alike, with an orange chest filled with spots and black wings and tails.

The Altamira Oriole and the Audubon’s Oriole are both non-migratory varieties, sticking around the southern part of Texas throughout winter. Males and females are similar in appearance, with yellow chests and black heads, wings, and tails.

How to attract Orioles to your garden

Just because you cannot keep Orioles as pets, that doesn’t mean you can’t share their company! With a few simple techniques, you can have dozens of Orioles frequenting your garden throughout the summer, and you don’t even need a cage!

Begin by purchasing a specially-made Oriole feeder that can hold liquid and fruit, and load it up with irresistible fresh fruits, such as oranges and grapes — two of their favorites. They’ll also love a sugar-water solution, which you can easily make by mixing one part sugar with six parts water.

Another expert tip is to place your feeder out early so the migrating Orioles know where to get fed! Early spring is the best time to attract Orioles to your backyard. Also, Orioles are known to be attracted to the color orange, so go for an orange feeder or simply place freshly sliced oranges on the feeder.

Place the feeder out in the open where the Orioles can find it — not hidden away under a tree, but still in a spot safe from neighborhood cats! Orioles also love streams and rivers, so placing the feeder close to a birdbath will help attract them too.

Orioles are gorgeous little birds that have beautiful singing voices that signal the coming of summer, so it’s natural to wonder whether one would make a good pet. These beautiful wild birds should not be kept as pets, though, because they have needs that are exceedingly difficult to provide for, and the practice is even illegal in many states. That said, you can still enjoy Orioles by attracting them to your backyard. In summer, your feeder will be teeming with Orioles if you offer them their favorite foods!

Why Did Andrew S. Go Home On 'The Bachelorette'?