Do Koalas Make Great Pets? What You Need to Know! 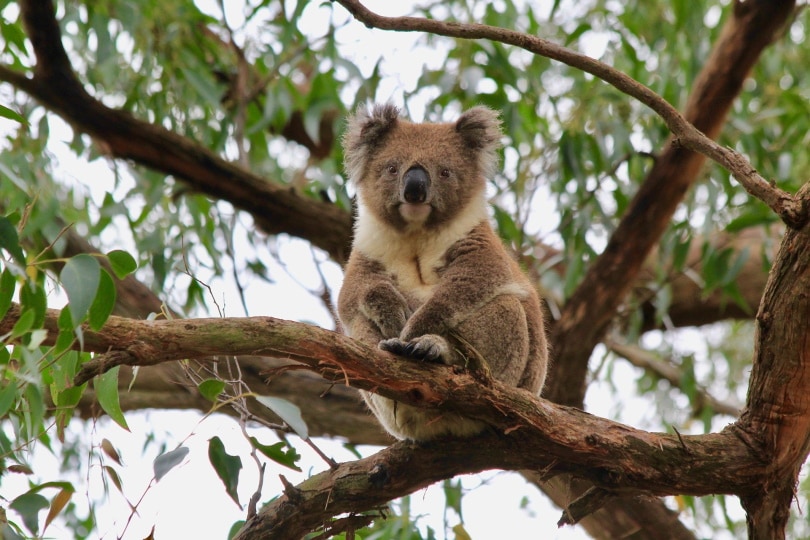 If you’ve ever seen a koala in the wild or in captivity, you know that they are adorable creatures. With furry coats and big, fluffy ears, they resemble teddy bears. If you’ve ever seen a cute koala and wondered whether it would make a good pet, the short answer is no. Even if they were, you wouldn’t be likely to get your hands on one as it is illegal to keep a koala as a pet. Keep reading to learn more about these unique animals!

Koalas likely evolved at least 15 million years ago. While the koala we know only grows to be about 3 feet long and weighs up to 30 pounds, fossils suggest that this modern-day species’ ancestors were much larger. Nowadays, in the wild, these animals can only be found in Eastern and Southeastern Australia, where they live in eucalyptus trees.

The earliest human record of the koala comes from the late 18th century, when John Price, a European settler, noted them while exploring the Blue Mountains in New South Wales.

Are Koalas a Type of Bear?

While you may have heard koalas called koala “bears,” they are not bears at all, but marsupials.  European settlers in Australia called them bears because of their vaguely bear-like appearance. The koala is most closely related to the wombat, marsupials that are also native to Australia.

Generally speaking, koalas are not inherently dangerous animals; they are herbivores that sleep for the majority of the day. However, humans have been attacked by koalas before. Why? Because while they may look cute and cuddly, koalas are wild animals that aren’t used to humans. When people get in a koala’s space, it can sometimes feel threatened. These creatures have surprisingly sharp teeth, used to rip eucalyptus leaves, and claws, used for climbing trees, that can do serious damage if they are used in self-defense. Of course, certain koalas—such as those raised in captivity—may be more receptive to human interaction than others. However, there is no indication that koalas are particularly fond of humans.

Why Can’t Koalas Be Kept as Pets?

Even if you are still interested in trying to keep a koala as a pet, you won’t be able to do so—at least not legally. Why? Because koalas are a protected species. They are considered to be vulnerable, but according to the WWF and other sources, they may soon be endangered due to a plummeting population.

While the general public can’t adopt a koala, there are certain instances where people may have the authority to keep a koala in captivity. For example, zoos may be allowed to keep koalas with the proper authority. People with the experience and credentials to care for koalas may also be permitted to take in orphaned, sick, or injured koalas on a temporary basis.

Although you cannot keep a koala in your home as a pet, you can “adopt” a koala by donating to the Australian Koala Foundation. Your donation will help support the work of saving wild koalas from becoming endangered or extinct.

While they are adorable, koalas would not make great pets for a few reasons. First of all, they are less cuddly than you think. As wild animals, koalas could harm you or anyone else that tries to get close to it in self-defense. Secondly, it is illegal to own a koala—even in Australia—because their populations are dwindling. You may not be able to bring a koala home, but you can always visit the koalas at your local zoo, or even make a donation to “adopt” a koala in the wild.

Does Kalvin Phillips Have A Girlfriend?