Do Honey Badgers Make Great Pets? What You Need to Know! 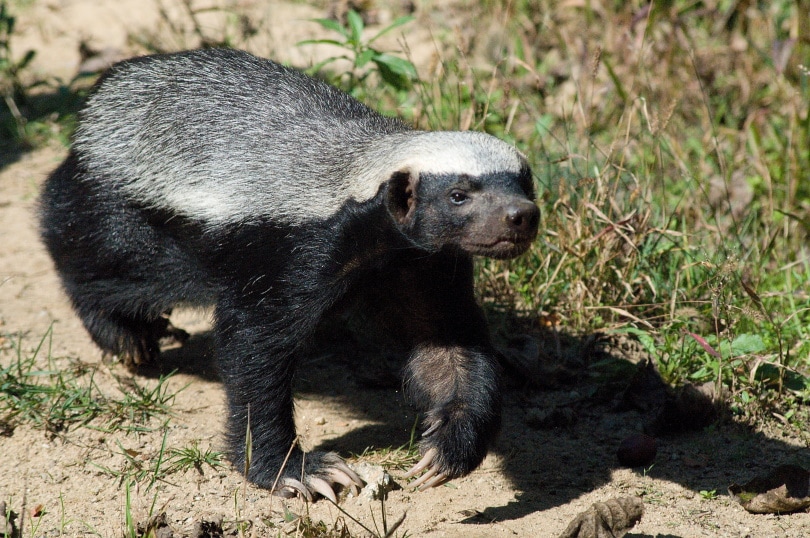 You can find Honey Badgers almost anywhere in Africa, some parts of India, and Southwest Asia. It has a short flat body with a large white patch and resembles a weasel more than a badger. Since we don’t have these animals in the United States, many people wonder if the exotic Honey Badger would make a great pet. Unfortunately, the Honey Badger is a wild animal that does not become tame over time, making it unsuitable for keeping as a pet. However, if you are still interested in owning one of these animals, keep reading while we discuss habitat, behavior, diet, and more to help you make an informed decision.

What is a Honey Badger?

The Honey Badger is the only species of Mellivora, which is in the family of Mustelidae, which contains badgers, weasels, ferrets, minks, wolverines, and others. Despite its name, it’s more anatomically similar to a weasel. It has a long body with tough skin that can be as much as ¼-inch thick. The skin is loose and allows the Honey Badger a full range of motion while being held by a predator. The spine is also extremely flexible. It has tiny eyes and ears and long sharp claws, all perfectly suited for fighting.

No. Unfortunately, the Honey Badger is not a friendly animal at all and will most likely attack you and your other pets if it gets the chance. The Guinness Book of World Records lists it as the world’s most fearless animal. These animals will continue to try to get free, even after years of captivity, and they are quite intelligent and able to open doors and figure out locking mechanisms. Some owners report it will even jump through a window to escape or look for food. This behavior persists throughout its lifetime, and since it is trying to get away, it will take every opportunity to attack you. Therefore, you cannot handle Honey Badgers or pet them, so they are not friendly.

Yes. The Honey Badger can be an extremely dangerous animal, but it usually only attacks if it feels threatened or cornered. It will attack humans, horses, dogs, snakes, and even lions and hyenas without hesitation and cause considerable damage. It can move freely within its skin, so it can easily turn and attack a predator with its sharp claws while being held down. Its skin is extremely thick and tough, withstands arrows and even strikes from a machete. Witnesses describe its attack as especially ferocious as it bites and scratches to break free.

What Do Honey Badgers Eat?

The Honey Badger is an opportunistic carnivore that will eat almost anything it can find. Its favorite food is bee larvae and honey that it gets from raiding beehives, including those created by killer bees, and this is how it gets its name. The stings can’t penetrate its thick skin, so it usually gets away unharmed, though there are exceptions. It’s also resistant to snake venom, and it often adds venomous snakes like the Cobra to its diet.

Most of its diet consists of food it digs out of burrows, including rabbits, and it eats the entire animal, including fur and bones. Its strong jaw can eat a turtle’s shell, and it also eats frogs, eggs, berries, roots, bulbs, and carrion. Farmers warm that it can also tear the roof off of your chicken coop when it’s hungry, and it will often murder all your chickens and smash the eggs leaving a bloody mess behind. Once it notices your coop, it can be difficult to deter and dangerous to dogs.

Is It Legal to Own a Honey Badger?

Most states have laws against owning wild animals unless you have obtained the proper permits, especially for dangerous animals like the Honey Badger. You will need to check with your local authorities to know if it’s possible to own a Honey Badger in your area.

Unfortunately, the Honey Badger does not make a good pet, but there may be organizations you can join that study these amazing animals, and you may be able to get close to them that way. In many areas, their numbers are declining due to habitat destruction, so and help is welcome.

We hope you have enjoyed reading over this short guide and have found it useful for answering your questions. If you have learned some new facts about the world-record-holding animal, please share our guide to the Honey Badger on Facebook and Twitter.

How To Search For Filters On TikTok