Coral Snake vs. Milk Snake: What’s The Difference? (With Pictures) 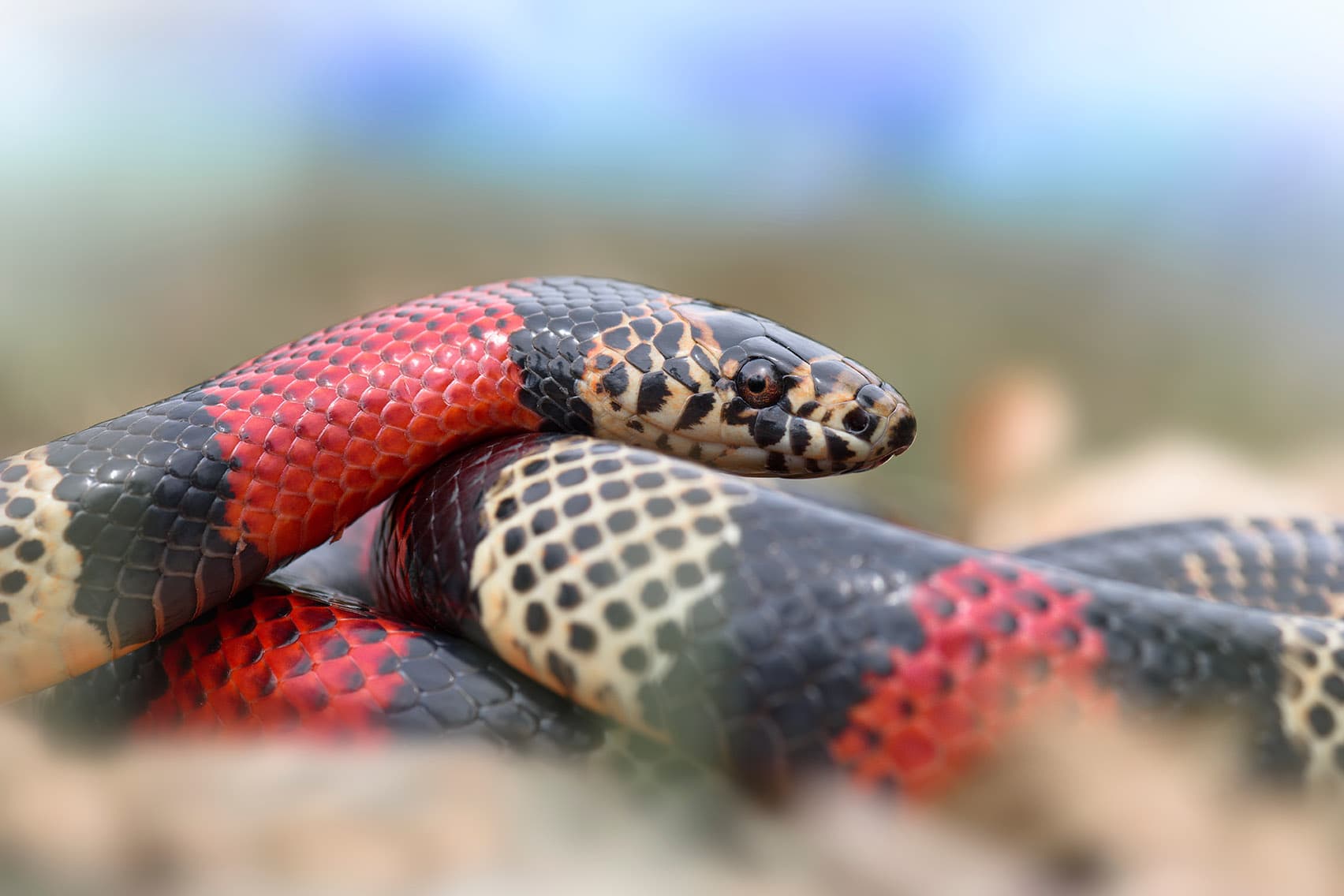 If you don’t know very much about snakes, it would be easy to look at a coral snake and a milk snake side by side and believe they were the same species. Both snakes have very bright and beautiful red, black, and yellow markings that make them popular choices for snake owners. However, there is one very major difference between these two species: the coral snake is venomous, whereas the milk snake is not. The milk snake exhibits a great example of aposematic mimicry. Its coloration mimics that of other dangerous snakes such as the coral snake or the copperhead in order to signal to would-be predators that they are not suitable prey.

In this article, we will evaluate both of these species and discuss other differences between the two animals so that you can decide which of these snakes is right for you.

Two species of coral snake live in the United States: the eastern coral snake (Micrurus fulvius) and the Arizona coral snake (Micruroides euryxanthus). Coral snakes may be small compared to other snake breeds, but they are highly venomous. In fact, their venom is considered to be second to only the Black Mamba in terms of deadliness. However, most humans don’t die from coral snake bites because their delivery system is not very effective. Moreover, coral snakes don’t tend to bite unless they are stepped on or handled. If you do decide to keep a coral snake as a pet, you should never handle it unless you are trained to do so.

Like other snakes, coral snakes are carnivores that eat lizards, frogs, birds, and even other snakes in the wild. You can feed mice to a coral snake in captivity. The mice you feed your snake do not need to be alive unless you are having trouble getting it to eat. As coral snakes have adapted to survive several weeks without food in the wild, it is not necessary to feed your coral snake every day.

Your coral snake’s enclosure should be at least 20 to 30 gallons large to give your snake enough room to move around. Coral snakes like to hide, so make sure to add plenty of decor such as branches, leaves, and gravel to the enclosure. These snakes are escape artists, so you need to make sure the enclosure is secure; having a venomous snake roaming around your house could be bad news, especially if you have children or other family members who are inexperienced with snakes.

The temperature of the enclosure should be kept around 77º-90° F. Snakes are cold-blooded creatures that don’t eat when it is too cold outdoors, so it is very important that the temperature of your snake’s enclosure is adequate. You should also keep the lighting in the enclosure set to normal daylight patterns, about 10 to 12 hours of light with no light at night.

Coral snakes are only suitable for experienced snake owners. They are not recommended for families with children, as children do not always understand boundaries and a coral snake’s bite can be lethal.

Milk snakes are a great, non-venomous alternative to the coral snake. They are a common breed of snake found throughout the Americas. With bright red, black, and yellow markings, milk snakes look remarkably like coral snakes and are often confused for them. You can use the popular rhyme “red touch yellow, kill a fellow” to remember which North American snake is venomous; a milk snake’s yellow bands do not touch its red bands, whereas a coral snake will have small bands of yellow touching its larger red bands.

Milk snakes have very similar dietary needs to coral snakes. Like coral snakes, they eat amphibians, birds, rodents, and other snakes in the wild. Hatchling milk snakes can eat pinkie mice, or newborn mice, while adults can eat adult mice and even adult rats. You should plan to feed your adult milk snake about once per week.

Unlike coral snakes, milk snakes are safe to handle. However, that doesn’t mean that they won’t be defensive at first. To avoid being bitten, be gentle when handling your snake and take care to support its entire body so that you don’t drop it. Once your snake becomes comfortable being handled by you, you can opt to take it out of its enclosure and put it in a separate tub for feeding. Doing so will help your snake learn when to expect food.

As far as substrate, there are a variety of options you can choose from. Popular options include aspen bedding, reptile bark, and cypress bedding. Similar to the coral snake, milk snakes like to hide, so it is important that you provide your pet with some sort of hiding spot or shelter.

Unlike the coral snake, milk snakes are great snakes for beginners. They are not too big for most potential snake owners and can usually be housed in a standard enclosure. They are also relatively easy to handle, and while it may hurt to be bitten by one of these snakes, a milk snake bite is not lethal.

Which Breed Is Right for You?

The milk snake makes more sense for most households than the coral snake because it is non-venomous and therefore easier and safer to handle. While the milk snake typically grows larger than the coral snake, it can still be housed in a standard enclosure, making them easy for most homes to accommodate. However, if you are an experienced snake owner who is trained to handle venomous snakes, the coral snake could be the right option for you. If you do buy a coral snake, never let anyone who isn’t experienced with snakes handle your pet or put their hands in its enclosure. If you or someone you know does get bitten by a coral snake, don’t hesitate to get medical attention.