Comparing the Max Power of Godox Strobes, Speedlites, and LEDs 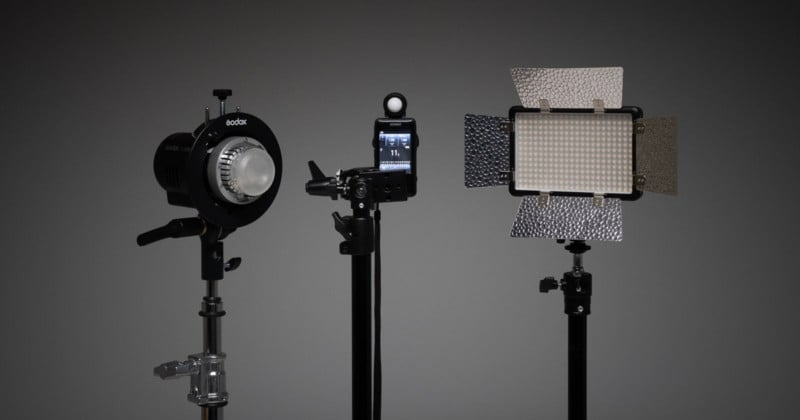 Why is it so difficult to compare one light to another? It would be bad enough to say that watts, LUX, watt-seconds, and guide numbers aren’t directly comparable. And unless you’ve been around lights for a long time, these measurements won’t even make intuitive sense.

Born from this frustration, I give you the Strobepro Power Scale we developed over at Strobepro! Before we get into it, here are a few disclaimers:

1. Practicality was the goal

If I set out to do an apples-to-apples comparison in every respect, I believe the usefulness of the data would have suffered. Different lights are meant to be used in different ways. For example, a studio strobe will usually be modified in some way, while portable LED panels are best suited as hard, unmodified lights.

For this reason, all studio strobes, speedlights, and COB LED lights were tested with a 24×36″ softbox attached. Most other lights were unmodified unless otherwise stated (see the legend below).

Therefore, in order to compare continuous lights and strobes, we must set a benchmark shutter speed. Because we want this to be a good comparison, I chose 1/125 of a second (a decent shutter speed for a typical portrait subject). If you can get sharp results with slower shutter speeds, then power to you!

1/50 to 1/60 of a second would be more typical for video production (assuming you’re shooting at 24-30p), but we can’t exactly do a video-based comparison with strobes on the same list! Nonetheless, you can typically expect to gain a stop of light when you’re shooting video.

3. Distance is always a factor

If some of the exposure results I recorded seem underwhelming, please note that my test target with my light meter was 6 feet away from the source (measured from the front of the light surface or the front diffuser). If you want your light to punch above its weight class, the best thing you can do is to move it closer! If you reduce the distance from 6 feet to 3 feet, your light becomes an effective two stops (4x) brighter.

It is exactly because of this behavior (the inverse square law of light) that I chose to position my lights a little further back than I might in a typical portrait session. From 6 feet away, I would gain a few inches’ margin for error with my measuring tape. 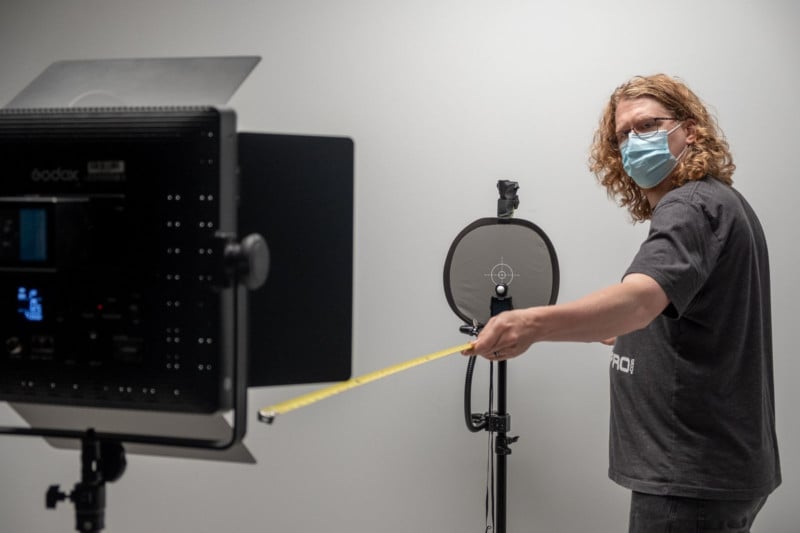 I used a Sekonic L478-D light meter positioned (as mentioned) 6 feet from the front surface of the light. A target grey was also used so that I could cross-reference image data to the data I collected from my meter. All lights were compared at their maximum power. In the case of bi-color LEDs, the color temperature that produced the brightest result was used.

Once the data was collected, I rounded each result to the nearest third of a stop and charted it on the scale below. 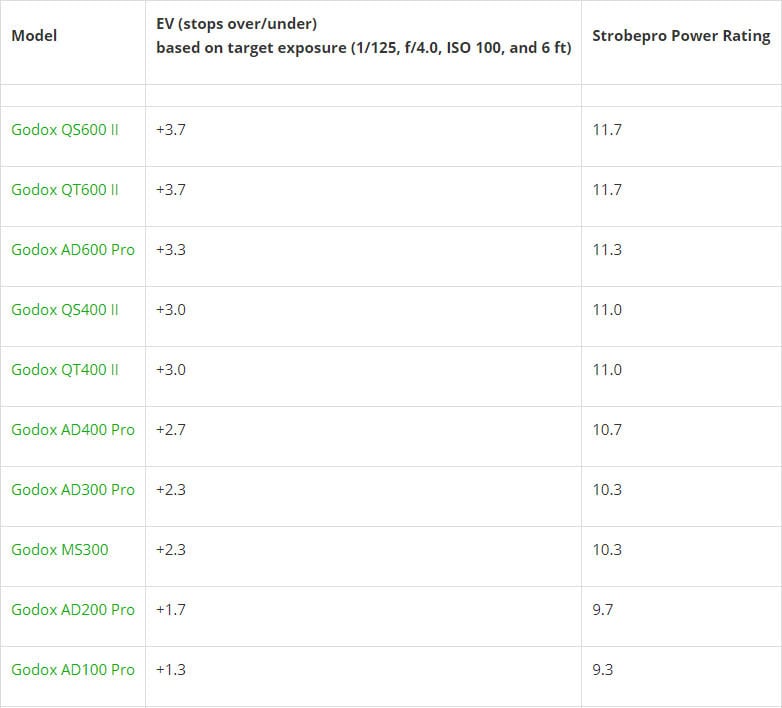 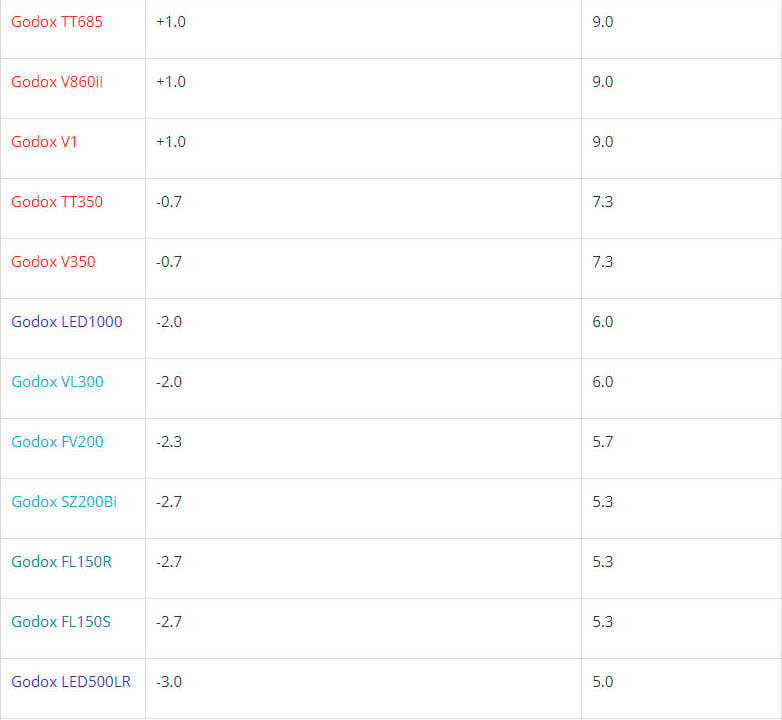 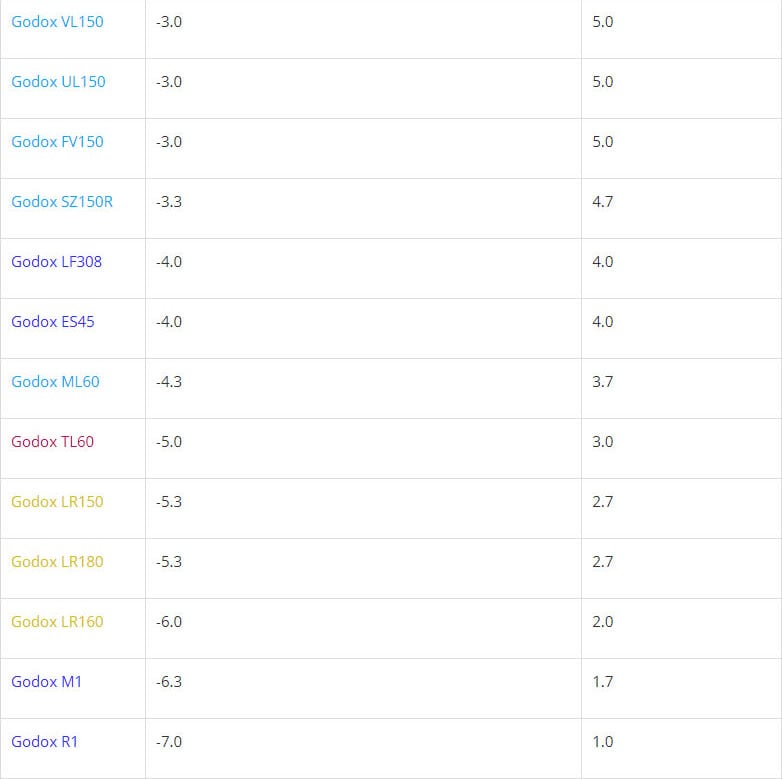 Note: Products were modified for the test as indicated:

How to Read the Data

All of these lights can be adjusted down from their maximums to varying degrees.

To read this data, you’ll need to understand what a stop of light is. If you are new to photography, you should familiarize yourself with this term. ‘Stop’ is shorthand for f-stop, but we can apply it to any form of light and not just to the light being let in through your aperture. Each time you add a stop, you are doubling your light.

Each whole number in either column represents a stop of light.

The 2nd column shows the data I collected based on the target exposure. For the target exposure, I used 1/125 of a second, f/4, and ISO 100 at a 6-foot distance from my light meter (measured from the front of the light surface or the front diffuser). A positive number indicates overexposure at the target settings, and a negative number indicates underexposure. For example, the full power flash from our QS600II was a whole 3.7 stops overexposed at those settings.

The 3rd column simply provides distilled data using our weakest light (the R1) as the baseline.

To determine how much brighter one light is than another, take the Strobepro Power Rating of the stronger light and subtract the rating of the weaker light. The result is the brightness difference in stops.

Beyond comparing one light to another, there are other useful things we can do with this data. We’ve prepared some general recommendations in the chart below to help you decide which lights might meet your minimum power requirements. 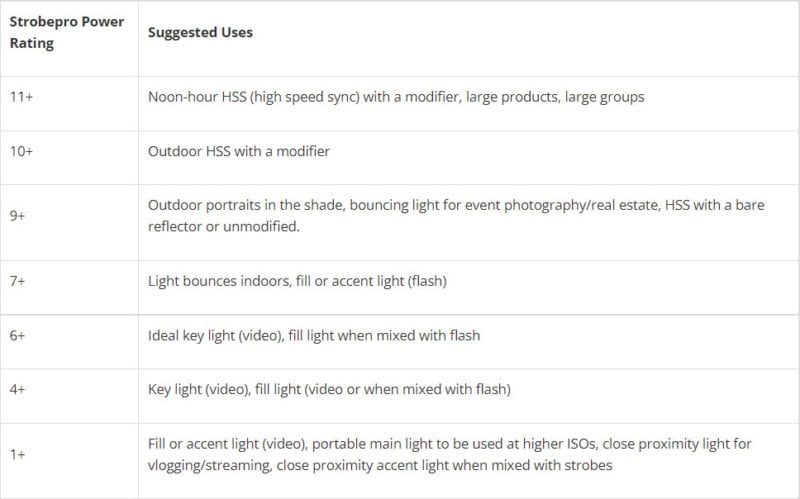 I hope you found this information useful. I sought to declutter the process of comparing various types of lights. Without seeing the lights in real space, it was always a particular challenge to explain how continuous lights might balance with strobes. No longer!

About the author: Kevin Greenhough is a portrait and travel photographer, and the media coordinator for Strobepro Studio Lighting. You can find his work on his personal website. This article was also published here.

How to use Virtual Desktops in Windows 11

43 Cheap Beauty Products That Actually Work Better Than Expensive Ones