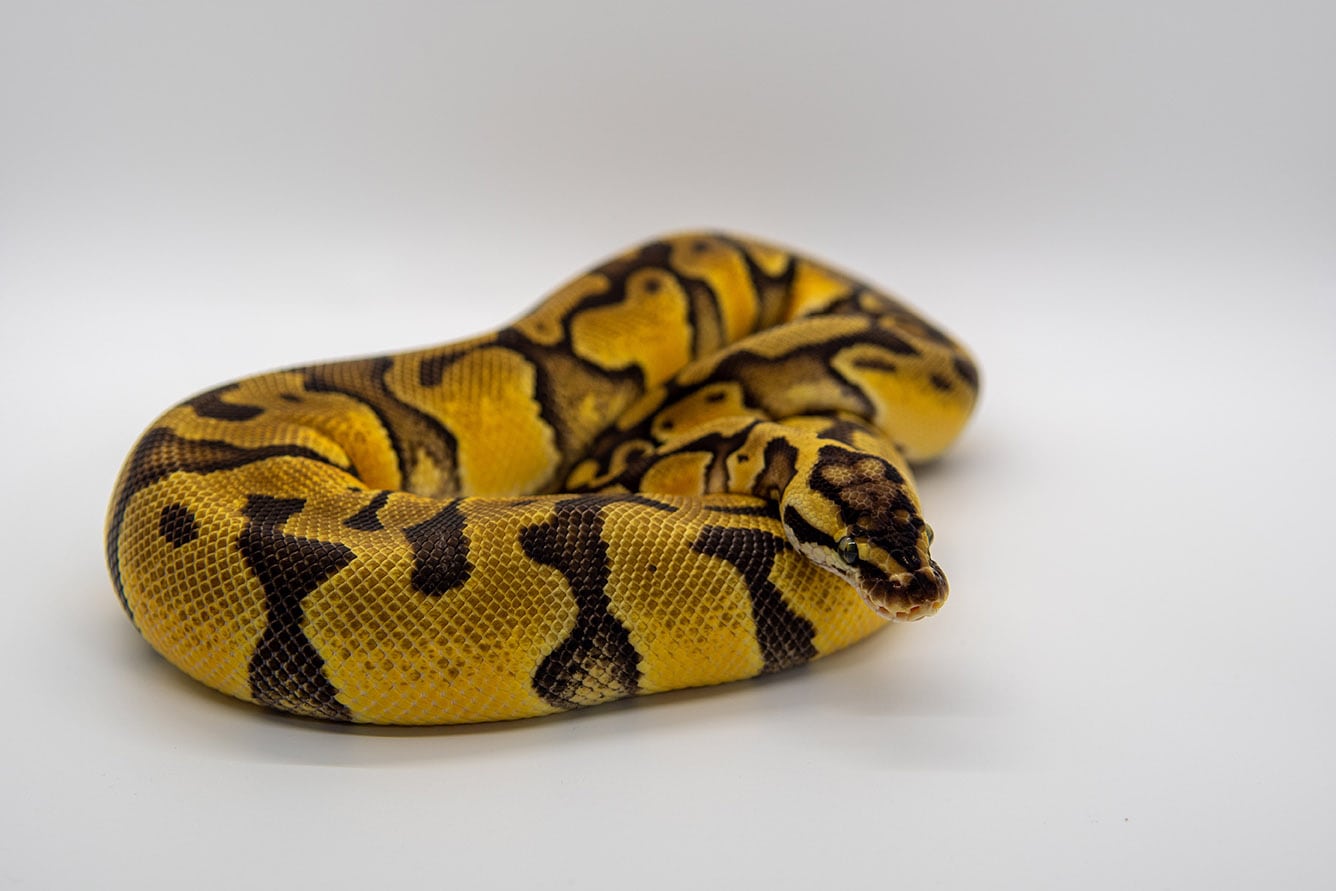 If you’re looking to enter the snake-handling world, it’s hard to beat the Clown Ball Python Morph as a first snake. They’re incredibly colorful yet easy to take care of. They’re also a larger snake with a mild temperament.

If you’re looking to add a snake to your home, a Clown Ball Python Morph is an outstanding choice. They’re relatively easy to care for and have an easy-going temperament that’s perfect for novice snake handlers. You also get a snake with an impressive size and a long lifespan, giving you the best of both worlds. Even better, you can handle Clown Ball Python Morphs a decent amount, especially if you train them from an early age.

The Clown Ball Python Morph has a golden hue along their sides, and they have a pronounced blotchy and wide dorsal stripe. However, they don’t typically have a dark lateral pattern, and if they do, it’s extraordinarily small.

These snakes have a unique appearance that makes them easy to identify and difficult to mistake for any other kind of snake.

How to Take Care of Clown Ball Python Morph

The humidity level is relatively low for a snake enclosure. Keep the level between 55% and 60% by misting occasionally.

There’s no need to get picky with the substrate. As long as it’s porous and retains moisture, you’re good to go. Different kinds of mulch work well, but anything that you find at a local pet shop should work fine!

You only need to feed an adult Clown Ball Python Morph about one rat a week. When they’re getting ready to shed their skin, they won’t eat as often. You can feed them live rats, but frozen or thawed rats are better because they can’t hurt your snake.

Some owners also recommend a dedicated feeding cage, so you don’t have to worry about getting bit when handling them in their regular cage.

Clown Ball Python Morphs are not any more susceptible to health concerns than any other Python mix, which is to say they’re quite healthy and rarely have any problems.

Still, scale rot, respiratory infections, dermatitis, ticks, mites, and other parasites can become a problem, especially if you’re not maintaining their cage correctly. If you notice that your Clown Ball Python Morph is developing any health concerns, it’s time to take them to a vet specializing in exotic animals.

Symptoms to look out for include lethargy, a lack of appetite, bumps, or small parasites throughout the cage.

Clown Ball Python Morphs have a relatively long lifespan in captivity, ranging from 20 to 30 years. However, it’s not uncommon for these snakes to live longer than 30 years if they’re well cared for!

Keep this in mind when purchasing a Clown Ball Python Morph, as you’ll be on the hook for caring for them for quite some time!

While owning a Clown Ball Python Morph is relatively easy, breeding them is far from it. That’s because you need to find compatible snakes, and they shouldn’t remain in the same enclosure after mating.

The eggs have a relatively long incubation period, followed by another few months before the eggs hatch. Even then, Clown Ball Python Morphs can have anywhere from five to 30 offspring at one time!

Once born, they all need separate enclosures, and they’re independent as soon as they hatch. It’s quite a challenge for a novice snake handler, so leave it to experienced hands!

There are few snakes as friendly as the Clown Ball Python Morph. However, that doesn’t mean you can skip all precautions. Always wash your hands before handling them — if they smell food, this can trigger an eating response.

It’s best to have a dedicated feeding cage so you don’t get bit when reaching into their enclosure. Start handling your Clown Ball Python Morph as soon as possible but keep the sessions short.

Over time, you can extend the sessions; they won’t mind you handling them after they’re used to it!

You can keep your Clown Ball Python Morph in brumation anywhere from 1 to 3 months.

How Much Do Clown Ball Python Morphs Cost?

Considering how easy they are to take care of, their unique coloring, and their long lifespan, it’s not a bad price!

There are few pets easier to take care of than a Clown Ball Python Morph. Still, before heading out to purchase one, ensure that you have everything that you need to house them, as these costs can quickly add up.

Ensure that you can take care of them for the rest of their lives. Since they have a long lifespan, the last thing you want is to have to rehome an older pet!

iPad mini 2021: Apple's smallest tablet may add these features we've been begging for