Can Goldfish Live with Guppies? We’ve Got the Answers! 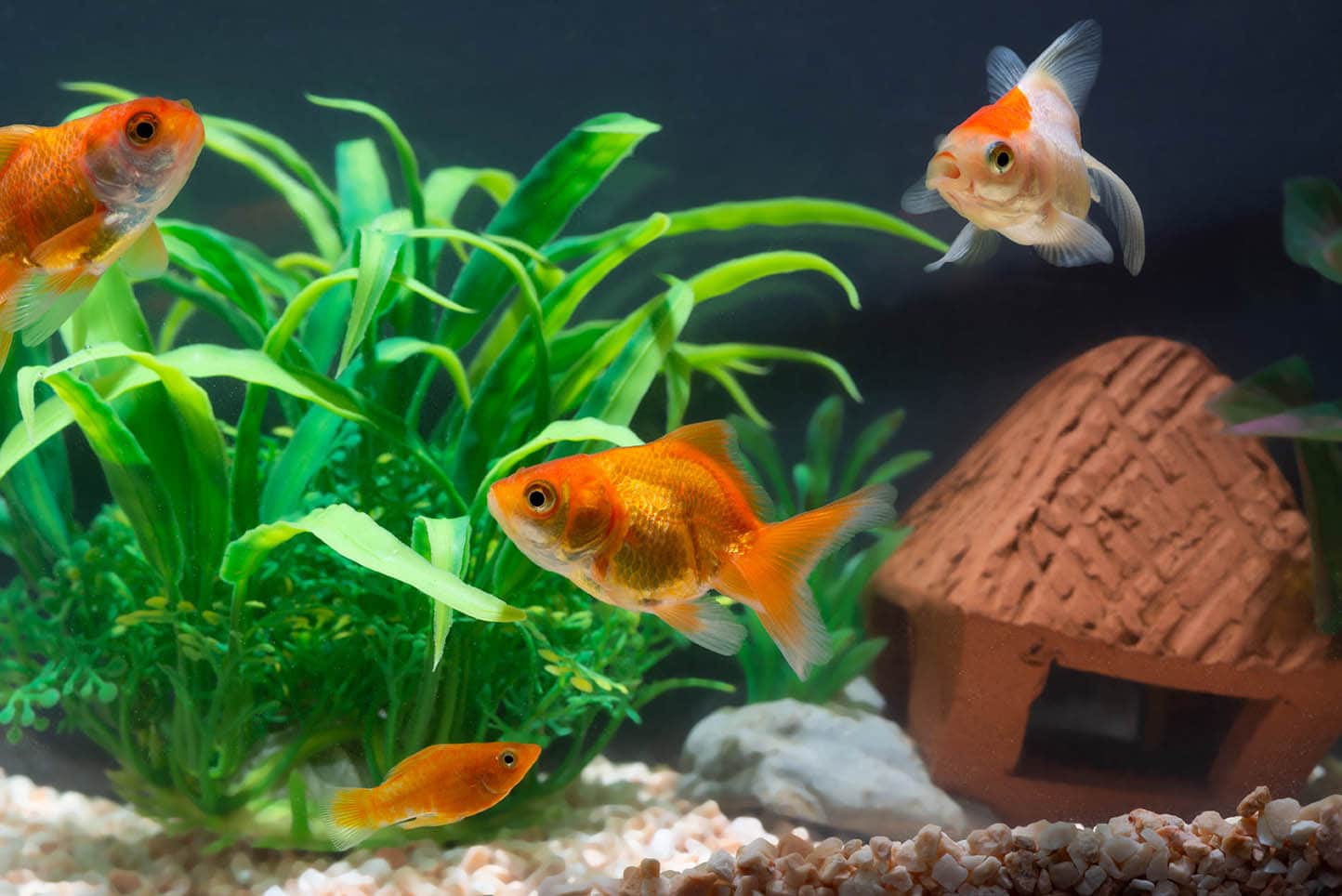 Goldfish and guppies both have their own charms. Both fish have big personalities and can be both soothing and entertaining to watch. They both bring their own unique beauty to tanks and you may have wondered if you can house goldfish and guppies together. We’ve got the answers, and there are definitely some things you should know!

You may have heard guppies referred to as tropical fish and goldfish as cold-water fish. Both of these are kind of accurate, but not 100% true. Goldfish prefer cool to temperate water and they tend to be happiest in water temperatures from 68-75˚F, so they are not true cold-water fish. Guppies, on the other hand, prefer water from 72-78˚F, so their water preference is temperate to tropical. There is overlap between these two ranges, though, so you can find a tank temperature that is both safe and comfortable for both guppies and goldfish.

Due to the unique aesthetic of both types of fish, goldfish and guppies can both bring beauty and interest to your tank. Guppies are available in a wide range of colors and patterns, especially male guppies. Goldfish, on the other hand, tend to come in slightly less interesting patterns than guppies, but they can have specially bred body or head shapes, colors, fin lengths, and even eye shape. The chubby bodies of fancy goldfish can make be a nice contrast to the colorful guppies darting around the tank.

Both of these fish also happily eat pests, like mosquito larvae and hydra, and rapid reproducers, like bladder and ramshorn snails. The size different in goldfish and guppies may mean that different pests are being eaten by both fish. For example, guppies won’t take care of your bladder snail infestation and goldfish are unlikely to take care of your hydra problem. Combining the two in environments where pests are present may lead to a healthy balance when it comes to keeping pest populations under control.

Another benefit of guppies, specifically, is that they eat algae and biofilm, both of which are things that goldfish don’t usually eat. This means that guppies can help clean up things within the tank, like driftwood, that goldfish won’t clean up. In some tanks, dwarf shrimp and certain varieties of small catfish perform these tasks well, but goldfish will usually eat these tank mates. This makes guppies a good alternative that is less likely to be eaten.

Goldfish will eat just about anything, and that includes tank mates. They are peaceful fish, but they just really love to eat! If it fits in a goldfish’s mouth, it’s up for grabs. If your goldfish are still young, then they are likely too small to eat adult guppies. However, most goldfish are not too small to eat guppy fry. Guppies are livebearers, so happy guppies reproduce like crazy. If you’re ok with guppy fry being eaten, then this might not deter you.

Keep in mind that goldfish can get quite large, while guppies usually reach between 1.5-2.5 inches at the most. This means that if your goldfish and guppies are similar sizes when you get them, within a year or two, your goldfish may far outsize your guppies. Goldfish are social, but they don’t form the kinds of bonds with tank mates that will prevent them from eating their tank mates if given the opportunity.

How Can I Keep Guppies and Goldfish Together?

If you’re interested in keeping guppies and goldfish in the same tank, there are a few things you should consider. If you want your guppies to be able to reproduce, then you should either choose to keep these two species separate or provide heavily planted areas in the tank that allow for fry to safely hide out while they grow. Without plenty of heavy cover, you are unlikely to have any fry survive being kept with goldfish. Consider floating plants with trailing roots, like dwarf water lettuce and Amazon frogbit, and tall plants that can be grown in clumps, like Vallisneria, Ludwigia, and Elodea.

Be prepared to split your guppies and goldfish into separate tanks or make use of a tank divider once your goldfish begin to become large enough to eat your adult guppies. If you feel like you’re ok with some of your guppies being eaten, please consider that goldfish’s eyes are often bigger than their “stomachs”. This can lead to goldfish attempting to eat things that can choke them, which can lead to the death of both your goldfish and the guppy it attempted to eat.

Closely monitor your tank temperature and water parameters to ensure everything stays within a safe, healthy range for both fish. While guppies are not truly tropical fish and goldfish are not truly cold-water fish, both fish can suffer negative health consequences if kept in inappropriate tank environments. Aim to keep your tank in the low to mid 70˚F range if you intend to keep these two types of fish together.

Contrary to what you might have heard, it’s not impossible to keep guppies and goldfish in a tank together while keeping both species happy and healthy. It does take planning and careful consideration, though! Goldfish can be difficult tank mates to small fish, and guppies can reproduce at a ridiculous rate, overtaking a tank in just a few months. Both fish may be able to balance the other out effectively, but it will still take work on your end to ensure the environment is safe for both types of fish.

Brooke Billingsley spent nine years as a veterinary assistant before becoming a human nurse in 2013. She resides in Arkansas with her boyfriend of five years. She loves all animals and currently shares a home with three dogs, two cats, five fish, and two snails. She has a soft spot for special needs animals and has a three-legged senior dog and an internet famous cat with acromegaly and cerebellar hypoplasia. Fish keeping has become a hobby of Brooke’s and she is continually learning how to give her aquarium pets the best life possible. Brooke enjoys plants and gardening and keeps a vegetable garden during the summer months. She stays active with yoga and obtained her 200-hour yoga teacher certification in 2020. She hosts a podcast focusing on folklore and myth and loves spending her free time researching and writing. Brooke believes that every day is an opportunity for learning and growth and she spends time daily working toward new skills and knowledge.

NordVPN is just $2.99 a month in Black Friday sale — get 3 months for free