Can Ducks and Chickens Live Together? 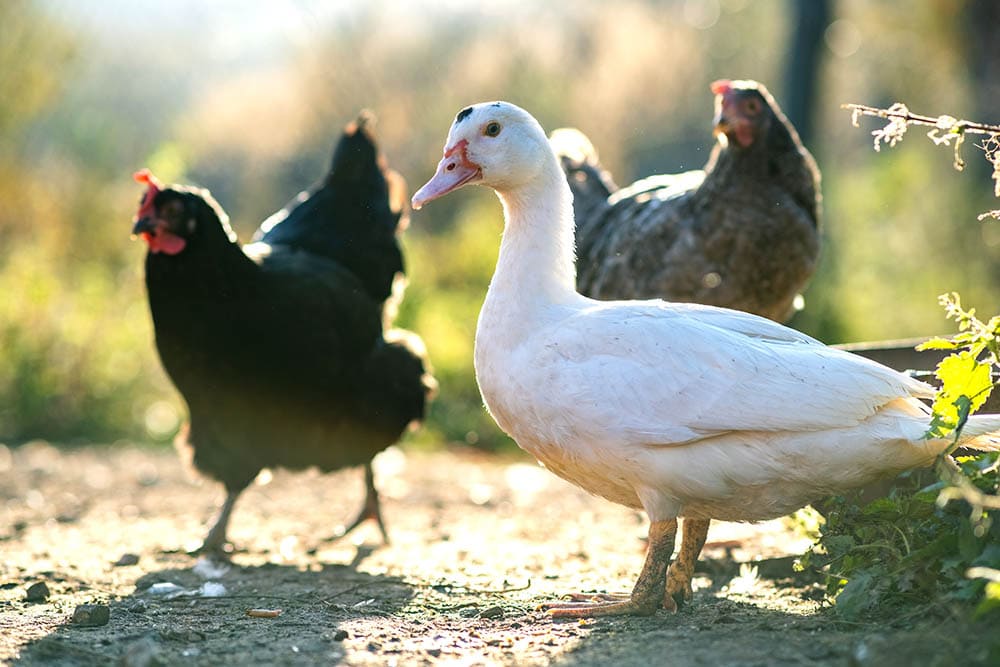 Ducks and chickens share certain obvious similarities. They’re both birds, both can be reared for their eggs, and both can be used as a profit stream for their meat. However, despite these similarities, there are some major differences between the two species. Where many chickens might be wary of humans, ducks tend to be very friendly and get along with people of all ages.

Ducks, unlike chickens, will usually require a decent body of water to live on or near. Chickens, for the most part, will do their best to ignore and completely avoid lakes and even ponds.

Although there are some difficulties associated with keeping both forms of fowl together, it is certainly possible to have ducks and chickens live together.

There is a degree of controversy surrounding the idea of keeping chickens and ducks together. The two species can squabble when kept together, but any keeper of chickens will tell you that is true when keeping chickens alone. They do have different needs, but they can also complement one another perfectly.

If you do decide to keep these two types of birds together, we’ve got some tips to help ensure a more relaxed coop.

The first and foremost point is that the two types of birds have many different living requirements. You can’t provide them with exactly the same things and expect both to thrive.

Chickens benefit from a warm, dry, coop that protects them from the elements. They want perches and they require nesting boxes.

Ducks are hardier than chickens, arguably because they have not yet been as heavily domesticated. This means that they are not as demanding when it comes to their choice of desirable residence. A lean-to or a relatively simple shed will suffice for ducks, as long as it is secure and prevents predators from getting in. With that said, you should remember that while chickens quite like a ramp into their coop, ducks do not waddle uphill very well, so they do better with a coop that is at ground level or has a very small step leading inside.

Both chickens and ducks are susceptible to predators, especially at night, which is when the birds are inactive and let their guard down. This is also when most predators are active and hunting. Ensure that the coop can be shut and locked down for the evening.

If you do keep the birds together in a single coop, ensure there is good ventilation. Droppings and even bird breath can make for a humid environment and chickens can suffer from breathing difficulties in this kind of condition. Good ventilation eliminates the risk of respiratory problems.

If the coop is too small, the birds can become stressed, and if they are in too close proximity, ducks and chickens will bicker. A laying duck requires 3 square feet. A laying chicken can thrive with a little less but still requires an absolute minimum of 2 square feet, and every chicken requires 12 inches of space on the perch.

It is worth noting that the two species have different nocturnal habits. Once chickens are down for the night, you will not hear from them until the morning because they will sleep right through. Ducks, on the other hand, are a bit more restless. They will settle down but will wake up after a few hours and proceed to have a conversation with the rest of the flock. This can be quite unsettling for the chickens, who can get stressed if their sleep is interrupted every night.

A brooder is a contained area where chicks or young birds are kept safe and warm. It is usually a heated area, and the chicks pop up from layers of warmth to get something to eat.

In the same way that having separate coops can be beneficial, so too can having individual brooders. Chicks are messy but like a dry brooder. Ducks are also messy, but they like a damp area, similar to if they were brooding next to a lake or other body of water. While the duck will be uncomfortable in a dry area, chicks can suffer from a form of pneumonia if they are left in a damp brooder.

Water is, in fact, the biggest difference between these two birds. Chickens will usually go out of their way to completely avoid water. They dislike being wet, will hide from the rain, and do not require a body of water in their surroundings.

Ducks, on the other hand, choose to live near bodies of water like rivers and lakes. They will actively search for a location that is considered prime real estate on the water’s edge. If you don’t provide enough water, your ducks could leave to find it themselves.

Another way in which these two birds differ is in their food and how they eat. A chicken enjoys using a feeder. They can be quite messy, so choosing a feeder that limits spillage is a good idea. This negates the use of bowls or troughs.

Ducks, on the other hand, have bills and these will not fit into feeders. Ducks prefer a trough feeder so that they can scoop food up using their bill. Ducks also like to mix their food and their water. They will often grab a billful of food and drop it in their water before picking it back up and eating it once it has soaked. Chickens will actively avoid wet food.

While chickens and ducks can live together, it would be best to describe their interaction as severely limited. For the most part, the two types of birds will ignore one another. Both birds will go about their own business and will not pay any attention to the other bird.

The exception to this rule comes in the shape of drakes and roosters. The males of both species are somewhat oversexed. They can be quite aggressive with the females during mating season, and they may also attack other animals if they believe they are trying to muscle in on their territory. You may have to prevent some pecking and other forms of aggressive behavior, and you should take steps to stop it as soon as possible.

Keeping Ducks and Chickens Together

It is possible to keep ducks and chickens together, even in the same area, but you will struggle with both birds if you don’t provide separate coops and living areas. Although there are some similarities between the two, they have quite different requirements, with the biggest difference being a duck’s need for water compared to a chicken’s disdain for damp environments.