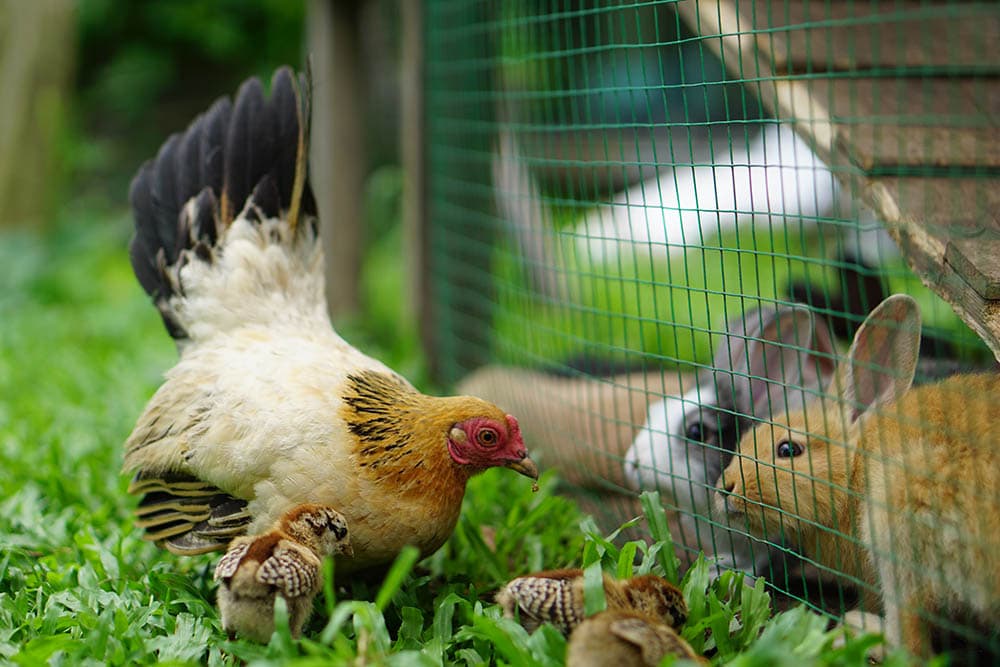 Chickens and rabbits are popular pets and while they may not look, sound, or act particularly similarly, the two species can happily live together. They can share space in a backyard homestead, a garden, or a ranch, without you having to worry whether one or the other group of animals is suffering as a result.

Rabbits are popular with homesteaders because they are small, quiet, and are prolific breeders. They produce high-quality manure for use on the veggie patch, and they produce pelts as well as meat, enabling self-sufficiency and providing multiple profit streams. They do require daily hutch cleaning, and although they might not require as much space as livestock like sheep or cattle, they do need somewhere to sleep and run around.

Chickens are also popular with homesteaders. They are relatively small, and they can become the most profitable animal in your yard thanks to their regular production of eggs, and the price of popular chicken meat. Introduce a rooster or two, and you can maintain your own flock. The dozens of different breeds offer tons of variety—from free-ranging birds to those with highly sought-after but somewhat rare eggs.

Rabbits and chickens are considered sociable animals. Neither species does well when kept as a solitary animal, and while both can do well in twos or threes, they prefer to be part of a larger social or familial group. While it is possible to introduce a single rabbit to a flock of chickens, or a single chicken to a colony of rabbits, you are likely to have greater success with several of each species.

Why Keep Them Together?

Of all the possible reasons to keep chickens and rabbits together, the most common is that of space. The backyard homesteader usually finds themselves somewhat limited for space. By allowing chickens and rabbits in the same area, you do not have to dedicate an area for each animal.

Tips for Keeping Rabbits and Chickens Together

As with any species or individual animal, your chances of a successful introduction are much greater when both animals are young. Young animals have not developed fear, aggression, or other potentially damaging and prohibitive reactions to the other species. Chicks and kittens are still curious and will want to meet their counterparts and investigate them.

Provide chickens with somewhere to roost and rabbits with hutches or cages to sleep in. This provides both animals with somewhere to get away, and it ensures that all of your animals are comfortable and safe. If there are any signs of aggression and you aren’t there to break it up, the animals can retreat to their own sanctuary.

Prevent Chickens from Perching on Top of Hutches

Perhaps the only real reason to prevent chickens and rabbits from living together is the fact that chicken poop can be dangerous for your rabbits. However, as long as you prevent the chickens from roosting on top of the rabbit hutches, you should be able to avoid any illness or death. Provide roosting spots that are well away from your rabbit hutches, to be on the safe side.

Male rabbits, or bucks, can be aggressive when they reach sexual maturity, especially if a chicken grabs their attention. The species is incredibly highly sexed and may try to mate with the chicken. They may also see the chickens as a threat to their chances with the does, or female rabbits, causing yet more aggressive tendencies. Ensure bucks are neutered before mixing your animals.

Similarly, the rooster can become very protective. In fact, this is one reason why some owners even choose not to introduce a rooster to their flock. They will protect their hens. This can include protecting them against the perceived threat of rabbits. Try to find some way to keep the rooster at bay, if it does look like it wants to protect the hens.

Birds of a Feather

The old saying goes that birds of a feather flock together. Don’t try to introduce a single rabbit to a dozen chickens or the other way around. Ensure that there is a decent-sized group of both animals. This will give some confidence and it will allow the rabbits and chickens to spend time with their own species, which is also very important.

You will have to be diligent, especially when you first introduce the animals, to ensure that they are not being aggressive with one another. If there are any signs of aggression, separate the animals. You can try to introduce them again, but you may, at some point, have to accept the fact that they will not live happily together. It may be necessary to provide them with their own space and their own area if this does happen.

Don’t rush any introductions or time the animals spend together. Let them be near one another initially, ideally without being in the same confines. This will give all the animals a chance to get to know one another’s smell and what they look like, without the risk of aggression. Once they get used to being near other animals, allow them to spend a little time together. Look for signs of comfort as an indication that things are going well. Rabbits, for example, will usually lay down if they are comfortable in their surroundings.

Chickens and rabbits can live together, especially if they are given their own hutches and rooster boxes if they are introduced at a young age, and if you don’t try to rush or force the introduction. This can allow you to save space and both animals might appreciate the additional company and numbers, too. You will never end up with hybrid rabbens or chickits, but you could end up with a fairly peaceful and amicable group of homestead livestock.