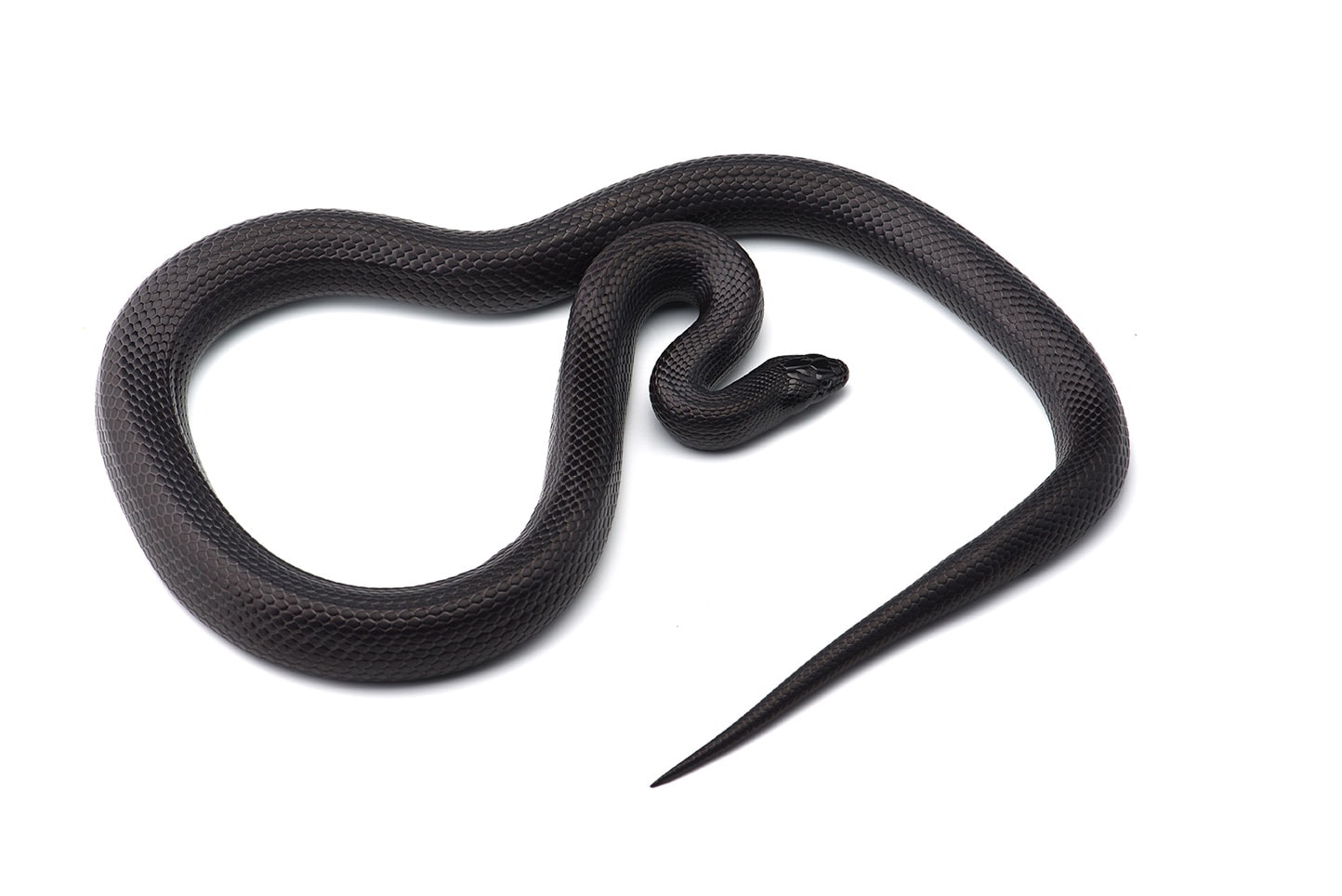 There’s a reason that so many snake owners venture into the snake-handling world with a milk snake. But with so many milk snake variations out there, not all are created equal.

One of the most common breeds is the Black Milk Snake. But what should you expect from a Black Milk Snake, and are they just as great for novice handlers as other milk snakes? We break down everything that you need to know about these magnificent animals here.

While milk snakes overall make good pets, Black Milk Snakes tend to be a little more temperamental. This is especially true during their adolescent years. However, overall Black Milk Snakes are easy to care for, live a long life, and give you an impressive companion to show off!

Still, not everyone appreciates snakes, so deciding if a Black Milk Snake is a good pet for you comes down to personal preference and knowing what you’re looking for in a pet.

Contrary to their name, when Black Milk Snakes are hatchlings, they aren’t always black! They can be red, black and white, or yellow when they hatch, and they won’t develop their black appearance until 6-10 months of age.

This is a gradual process, so don’t expect your Black Milk Snake to change colors overnight. Once they are full-grown adults, they are black from nose to tail, with a visible textured pattern throughout.

How to Take Care of a Black Milk Snake

The tank should have a fully closed lid instead of a mesh top. Not only does this keep your Black Milk Snake from sneaking out, but it also helps retain moisture to keep your tank at the proper humidity level.

A Black Milk Snake does not require any special lighting for their tank. Some experts recommend a small UVB light (of 5%) to maintain optimal health, but this is completely optional.

Since your Black Milk Snake is unable to regulate their own body temperature, it’s essential that you have a temperature gradient set up inside their tank. This means placing a heat source on one side of the tank while having no artificial heat on the other.

A soft substrate that your Black Milk Snake can burrow into and that will retain humidity is ideal for the enclosure. While there are plenty of great choices, we recommend cypress mulch. Scatter a few rocks around the enclosure too!

Like most snakes, a Black Milk Snake doesn’t require a varied diet in captivity. You should feed a young milk snake nothing but mice; two to three times a week is plenty. When your Black Milk Snake has reached full maturity, one medium-sized rat a week is enough.

Keep in mind that it’s best to feed your snake a frozen or thawed rat, as a live rat can potentially injure or even kill your snake. Finally, when your Black Milk Snake is getting ready to shed their skin, it’s typical for them to stop eating.

Black Milk Snakes have few health problems when they are adequately cared for. Issues to look out for include scale rot, respiratory infections, dermatitis, and parasites.

While tank conditions almost always cause these problems, they’re still something that you need to keep an eye out for. Check for lethargy, loss of appetite, bumps, or small parasites moving around the tank. If any of these conditions are present, you’ll need to take your Black Milk Snake to a vet who works with exotic animals.

Keeping the tank clean and the humidity at the proper levels is the best way to prevent any of these pesky problems.

When properly cared for, your Black Milk Snake can live for over 20 years! In fact, it’s not uncommon to see them live up to 25 years.

Keep this in mind before heading out to purchase one, as they’re not a short-term investment. The last thing that you’ll want to do is to rehome a large snake after they’ve been a part of your family for the last 10 years.

While Black Milk Snakes are relatively easy to care for, they’re notoriously difficult to breed. You need to find two compatible snakes and only keep them in the same enclosure long enough for them to mate.

Milk snakes are incredibly anti-social, and if you leave both of them in the same enclosure for too long, they’ll fight and eventually kill and eat each other.

Once the female Black Milk Snake is pregnant, it’ll take several months for her to develop the eggs and several more for them to hatch. Once hatched, the young Black Milk Snakes are completely independent, and you’ll need to separate them.

In each go-around, a Black Milk Snake can have anywhere from five to 25 hatchlings!

While milk snakes are among the friendliest snakes around, Black Milk Snakes go through a temperamental phase in their adolescent years. However, if you leave them be during this time, they won’t get the necessary interactions to become accustomed to handling.

Therefore, if you get a young Black Milk Snake, expect to get nipped a few times as they age. But before too long, they will get over these adolescent hormones and become a friendly member of the family!

Like most snakes, your Black Milk Snake should shed all their skin at one time. If it’s coming off in patches, it’s a sign that you don’t have enough humidity in the tank. Raise the humidity level as soon as possible. An incomplete shedding process can lead to other health concerns.

Throughout the winter months, you should drop the temperature in the tank a few degrees over the span of several weeks to mimic winter. During this time, your Black Milk Snake will become slightly more lethargic and lose their appetite.

This is completely normal. At the end of winter, slowly raise the temperature, and they’ll return to their normal behavior!

How Much Do Black Milk Snakes Cost?

As far as snakes go, a Black Milk Snake is incredibly affordable. They only cost between $75 and $200, making them one of the more affordable snakes that you can purchase. Just keep in mind that you’ll also need to invest in a proper tank, heating source, and other equipment to care for this snake.

If you’re looking to breed, there’s not a ton of money in Black Milk Snakes, although the upfront cost is a little cheaper.

After reading everything about the Black Milk Snake, it can be extremely tempting to head out and purchase one. Just be sure that you can afford everything that goes into taking care of one and that you have the space and ability to keep them for the next 20 years.

Finally, remember that their magnificent appearance is a wonder to behold, but they’re not as beginner-friendly as other milk snakes. So, if you’re afraid to get nipped a few times, these might not be the snakes for you!