8 Ways to Stop a Rooster From Crowing Excessively 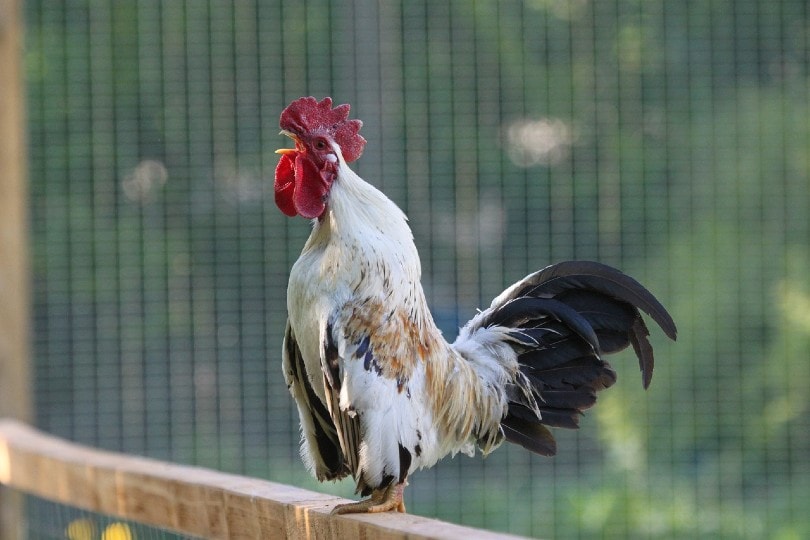 Most people have experienced being woken up at the crack of dawn by a crowing rooster — it’s a nostalgic experience for some, but they’ve probably never owned a rooster! The real problem is that roosters don’t just crow in the early hours of the morning; some will crow all day long, and it can become annoying, to say the least.

On average, most roosters will crow 10-20 times a day, an important factor to consider if you don’t yet own a rooster. Crowing is normal behavior for roosters, and this noise is unfortunately just one of the caveats to owning a rooster. Other than turning your rooster into your next Sunday lunch, there are better ways to reduce their crowing to a more manageable state.

Read on to find out how to stop your rooster from crowing excessively (without resorting to eating him!).

Most backyard breeders keep chickens purely for eggs, and if this is the case in your situation, you may be happy to know that you don’t need a rooster for egg production — problem solved! Of course, if you want fertile eggs, you’ll need a rooster to produce them.

Some roosters crow excessively because there are not enough hens in their flock. The more hens you have, the busier your rooster will be, and thus, the less likely that he’ll feel the need to crow constantly. Remember that you’ll need to keep him with the hens, as separating him from his precious flock may only make the problem worse. While this may not work in every case, it should certainly help if you only have two to three hens for your rooster.

A large part of why roosters crow is to show other roosters who’s in charge. Usually, you want to have around 10 hens per rooster. If you have more hens than this, you’ll naturally need additional roosters, which can cause conflict. Normally, if a rooster has his fair share of hens, a pecking order gets established and roosters will leave each other alone, but they still may crow to remind other roosters who’s the boss.

If you have multiple roosters, you may want to consider separating your flocks so your roosters don’t view each other as competition. If this doesn’t do the trick, reducing your flock to one rooster may be the only option.

This is a common trick among backyard breeders, and it has proved successful for many. Your rooster has a natural internal clock and will usually crow when the sun begins to creep up. You can trick your roosters’ internal clock by using artificial lighting in his coop, tricking him into thinking that there is still daylight outside when the sun goes down. If you set up the light to switch on and off automatically, your rooster will hopefully only crow when you let him out of his coop. Of course, most roosters crow all day long, but this may at least gain you a few extra hours of sleep.

Contrary to popular belief, roosters are highly intelligent animals that are keenly aware of their surroundings. It may just be that your rooster is bored and needs a change of scenery. A mobile coop that gets moved every day can keep him entertained by giving him new places to explore, and you may even want to consider adding in a few toys or hidden food to keep him mentally stimulated.

5. There may actually be a reason

Because a crowing rooster can become so annoying, we often default to irritation and simply assume that our rooster is crowing purely to annoy us. But there is usually a reason, be it one of the aforementioned reasons or there is something wrong, like a predator. Roosters are keenly aware of their surroundings and highly protective of their flock. If your rooster senses that there may be danger close by, he’ll crow to warn his hens and get them to hide. Go check the immediate area around your rooster for predators or for something that he is (hopefully) mistaking for one.

Another reason that roosters crow throughout the day is to keep in touch with their flock, calling them for food or warning them of danger (or just to say hi). A rooster that is kept alone, far enough away from hens that he can’t hear or see them, may have less of a reason to crow. You can then simply give him access to your hens when you want breeding to occur. This may seem rather extreme, but it’s better than turning him into dinner.

7. Use a rooster collar

A rooster collar may be an option if nothing else is working for you. Bear in mind that these collars will not stop a rooster from crowing completely, but it does make it more difficult for him and may help him crow less. The collar is designed to restrict airflow when your rooster attempts to crow, causing him mild discomfort and restricting the volume that he can crow at. You can buy specially made rooster collars, but a small dog collar should do the trick too — just be sure not to fasten it too tightly.

We don’t recommend this method or feel that it is particularly humane, but it is an option. There is a surgery that a vet can perform that will reduce your rooster’s crowing to whisper. The vet will make a small incision on either side of the rooster’s syrinx, which diverts air into the clavicular air sac, making crowing impossible. The surgery is quite expensive, though, and not many vets will perform it.

Another surgical procedure — castration — renders your rooster a “capon,” and this will reduce his hormones and thus, his urge to crow. Again, this is prohibitively expensive and not many vets will do it. It also raises the important question: If you don’t want fertile eggs, why have a rooster at all, let alone a castrated one?

Hopefully, one of these tips will help solve your rooster issue or at least make it more manageable. Sometimes, you may need to try more than one method before something sticks, and sometimes, a rooster is just prone to crowing excessively and cannot be stopped. Have you successfully stopped your rooster from crowing too much? Please let us know how you did it in the comments!

Clare Crawley Is Getting Her Implants Removed After Health Issues