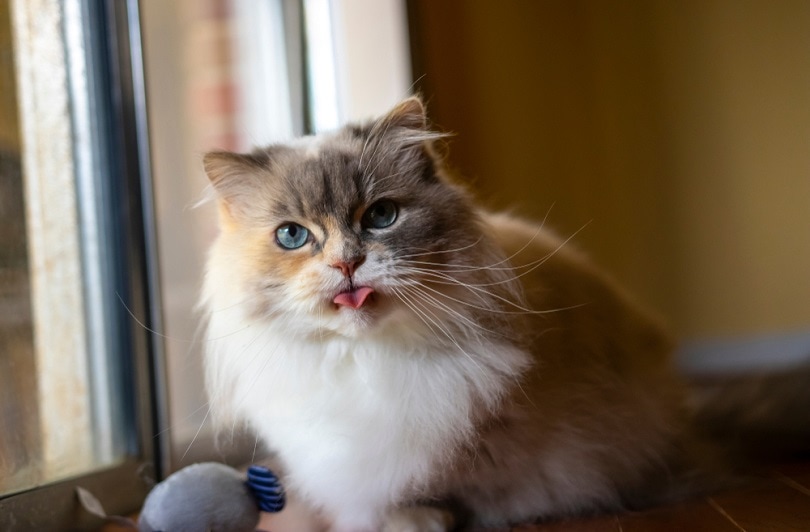 Considered the original breed of “dwarf cat,” the Munchkin is about as cute as they come. These adorable cats are characterized by their very short legs, caused by a unique genetic mutation. Even though there is controversy surrounding the breed, and the CFA(Cat Fancier’s Association) has yet to fully recognize the breed, these cats have a clean bill of health by experts, and the genetic mutation does not result in any severe health issues for the breed.

Munchkin cats are relatively new and only began being developed in the mid-1980s. They have since split into unique Munchkin variations. With the breed’s ever-growing popularity, there are sure to be even more refinements made. Here are eight different Munchkin cat breeds around today.

The Bambino is a cross between a Munchkin and the hairless Sphynx. The breed is new, so not much is yet known about these cats. The name “Bambino” comes from the Italian word meaning “baby,” referring to the cat’s short legs and lack of fur. They are usually friendly, intelligent, and highly affectionate cats and are known for their tendency to vocalize. Their playfulness and friendly nature make them a great option for families.

A cross between a Munchkin, Sphynx, and an American Curl, the Dwelf’s claim to fame is their close appearance to elves, from where the breed gets their name. They are similar in appearance to the Bambino breed, although they get their characteristic curled ears from their American Curl heritage. They are known for their playful and affectionate nature and make a great family pet because they are generally fine with children, other cats, and dogs.

The Bengal cat brought the appearance of wild cats into the homes of domestic cat owners. The Genetta — a recent breed that crosses a Munchkin, Savannah, and Bengal — takes this concept a step further by introducing a miniature version of these wild-looking cats. These cats are as playful and friendly as all other Munchkin varieties, although they are also known for their high intellect, a trait that can get lead them into mischievous behavior at times.

The Kinkalow is a cross between a Munchkin and an American Curl, and they are close cousins of the Dwelf variety, except with a full coat of fur! They can come in almost any color and pattern variety and have the characteristic short legs and curled-back ears of their parents. They are famous for their playful personalities and “dog-like” qualities, known to follow their owners around from room to room and stay involved in every activity. They are loyal and loving animals that do not enjoy being left at home alone, so they need a great deal of attention and devotion from their owners.

A cross between a Munchkin and Selkirk Rex, the Lambkin is a relatively new breed and is considered one of the rarest cat breeds in the world. The result of this crossing is a sweet, loving, and calm cat that is both highly tolerant and affectionate and gets along with everyone. With this character comes a close bond with their owner, and these cats do not tolerate being left at home alone well.

The Minskin is a cross between a Munchkin and Sphynx, with Devon Rex and Burmese added later in the breed’s development. The Minskin is one of the most recently developed breeds in this list, and as such there is not much known about these tiny felines. They are predominantly hairless, although commonly have patches of short fur on their points. They are exceedingly playful and friendly cats, with a mischievous streak added in too.

A cross between a Munchkin and Persian, the Napoleon inherits the best traits from both their parent breeds, resulting in an adorable, cuddly, playful, and friendly feline. They are highly social cats that love being around their owners and are known for placing themselves in the middle of whatever may be going on. They bond strongly with their owners and are great with both children and other pets, and as such, they do not do well being left alone.

A cross between a Munchkin and a LaPerm, the Skookum has the characteristically short legs of a Munchkin and the unique, curly coat of the LaPerm. These cats are known for being sweet, affectionate, and intelligent animals that get along great with just about everybody. While they are fairly laidback felines, they have a wonderful playful streak, making them ideal family pets. They are loyal animals that enjoy being around humans and need a ton of devoted attention and affection.