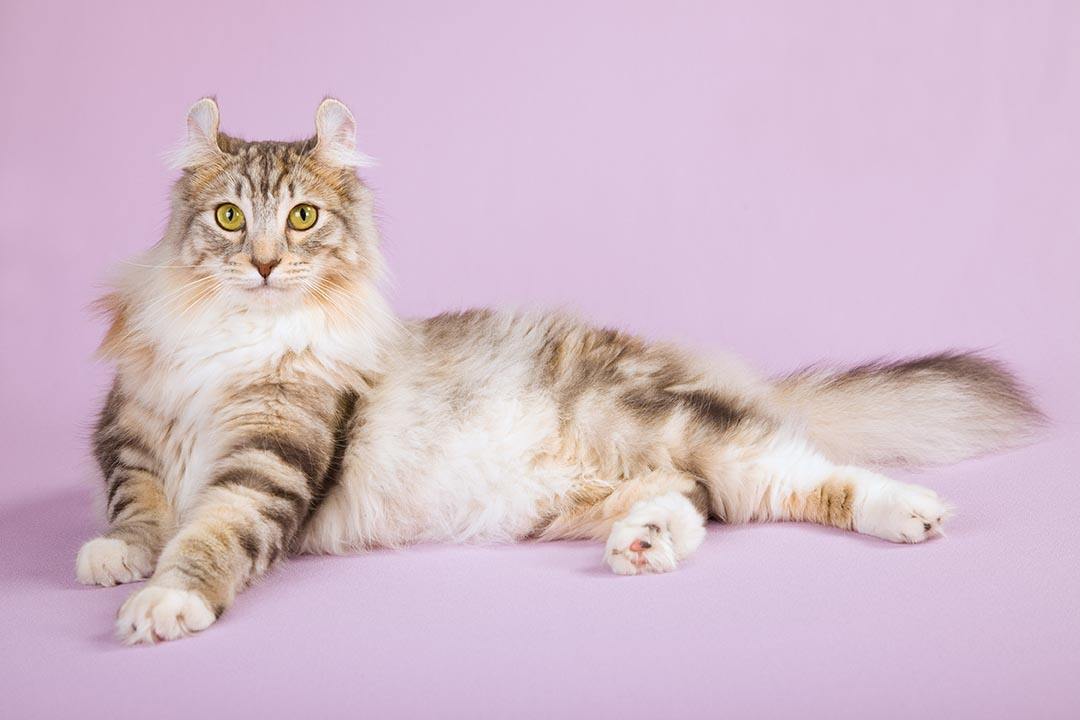 Most cat breeds have pretty average-sized ears. Some even have relatively large ears, like the Siamese. Others have tiny ears. Some of these ears are small in general, though others aren’t formed “correctly,” which causes them to look smaller than they are. For example, some cats have a defect in the cartilage in their ears, making them lay a bit flat and look smaller.

No matter why the cats’ ears are smaller, there are a few breeds with smaller ears. We’ll take a look at them in this article.

These felines have a cartilage mutation that causes their ears to curl backwards. The kittens are born with upright, normal-sized ears. However, their ears curl backwards a few days after birth. The mutation occurred spontaneously. It was then selectively bred to create this unique breed.

Due to their abnormality, their ears can be easily damaged. Their cartilage is not formed correctly, so it cannot hold up like normal ears. They must be gently handled for this reason.

The American Curl is known for its gentle and people-oriented personality. They like children, though they may need a bit of extra socialization with cats and other pets. They are moderately active and quite intelligent. They need a bit of stimulation, though not necessarily as much as other felines. They enjoy playing fetch and similar games. These felines are notorious for using doorknobs, so child locks may be necessary.

These cats often meet their owners at the door and can be vocal when they want attention. However, they don’t mind being left alone either.

They are pretty healthy cats and aren’t prone to many health problems. Their ear canals may be narrower than some breeds, potentially putting them at risk for ear infections and wax build-up.

The Scottish Fold is probably the most famous cat with these small ears. Their ears are folded due to a specific genetic mutation. This mutation affects the cartilage throughout their body, which causes their ears to fold forward. They aren’t smaller than other cat ears, but their folded appearance makes it seem so.

Because the cartilage throughout their whole body is affected, this cat is prone to some health conditions. For this reason, this breed is a bit controversial. They are prone to degenerative joint disorder, likely due to their low cartilage quality. Joints have a cushion of cartilage. When that cartilage isn’t very high-quality, it can cause joint issues. They are also prone to hypertrophic cardiomyopathy, though the exact reason why is unknown.

These cats are moderately active and quite clever. They enjoy feline sports like agility and puzzle toys, which can help keep them entertained. They are affectionate and attached to their people, so they don’t like being left alone for long periods. They do best with someone home with them throughout the day.

Persians are most well-known for their “squashed” faces. However, they also have smaller-than-average ears. They have a long, fluffy coat that makes them seem even smaller. This breed is quite popular, though it is generally considered an “exotic breed.”

These cats come in many different colors and breed variants. No matter their color, they all have smaller ears.

They are known for being docile and laidback. They are not very active and would much rather sit in your lap than play. They’re suitable for those that want a quiet feline – not one that will run around the house. They are affectionate, but they can be picky about who they show affection too. Many will choose only one or two people to attach themselves to and pretty much ignore everyone else.

This cat is unlikely to climb your curtains or get into cabinets. They just aren’t that sort of cat. They’ll probably spend most of the day laying around – not running around.

Out of all the cats out there with smaller ears, Highlander probably has the strangest ears. They have curled ears similar to other breeds, though they curl more inwards than forwards or backwards. They also have other strange features, like an extra toe on each paw.

As a mix between a Desert Lynx and a Jungle Curl, these felines look rather wild. They have exotic coat colorations. However, they are very domesticated, though they still love water like their wild counterpart.

These cats are incredibly athletic and energetic. They need quite a bit of room to run and exercise. Interactive toys are a must. They are intelligent and enjoy puzzle toys. If they are not kept entertained and stimulated, they will try to make their own fun – which usually involves doing something they shouldn’t.

They are loving and social. Often, they enjoy being around people, including family, friends, and strangers. They are affectionate and can even get along well with children, especially if they’ll play with them.

This breed is pretty healthy. They aren’t particularly prone to any health problems and usually live long and healthy lives.

The Birman is named after Burma, where it originates from. This cat has a quiet voice, though they are still quite vocal. They are often docile and enjoy lying around. As people-oriented cats, they may follow their humans from room to room, however. They are an intelligent feline that enjoys puzzle toys, but they aren’t nearly as active as other felines.

They are pretty laidback cats, which makes them suitable for children.

These felines are prone to a few genetic problems. For instance, they are genetically dispositioned to congenital hypotrichosis, which causes kittens to be born without any hair. They also end up with an immune deficiency, leading to more severe infections. The cats with this condition often don’t live an entire lifespan due to the likelihood of them catching a life-threatening infection.

They are also prone to corneal dermoid. This basically means that the cat has skin and hair covering the eye, which needs to be surgically removed. Spongiform degeneration is also more likely in this breed. This progressive, generative disease is characterized by hind-leg weakness and uncoordinated movements, as it affects the central nervous system.

This breed was developed to be the short hair version of the Persian. They have a similar head shape, including shorter ears and a smooshed face. They are also similar to the Persian in their temperament, which usually means they are very calm and docile. This breed was developed by crossing Persians with shorthair breeds, mainly the American shorthair. They have been a bit controversial in the cat world as to whether they count as their own breed or not.

While this breed is quite similar to a Persian, they are a bit livelier. They are known for being curious and playful, though they still spend much of their time lounging around. They are lap cats that prefer to lay around and be pet much of the day. They are calm cats that are suitable for smaller homes and spaces, as they don’t require much room to run and explore. They are capable mouse hunters, primarily due to their American Shorthair blood.

As a hybrid, these felines are incredibly healthy. Due to their tiny faces, they may develop Brachycephalic airway obstruction syndrome. This occurs when the cat’s squished face obstructs its upper airway system. This can cause inflammation and low oxygen absorption, which can lead to other problems.

The British Shorthair is one of the more popular breeds of cats in the UK. They are likely a reasonably old breed that came about naturally through generations. They are the traditional domestic cat and are known for their stocky body and broad face. A quarter of all kittens registered each year in the UK are of this breed.

These cats are known for being easygoing. They are not very active or playful as many other breeds. However, they are pretty sweet-natured and tend to attach themselves to their owner. They are quite affectionate, though they don’t mind being left alone for long periods either. They’re attached without being too needy.

They are good around other pets and can get along with children. They will tolerate being touched and played with, though they typically don’t like being carried around. These felines have very low grooming needs overall, so they don’t require much care time.

This British feline can be prone to hypertrophic cardiomyopathy. This is significantly more common in males for an unknown reason. This occurs when the heart thickens, which results in the heart being less efficient.

Kristin is passionate about helping pet parents create a fulfilling life with their pets by informing them on the latest scientific research and helping them choose the best products for their pets. She currently resides in Tennessee with four dogs, three cats, two fish, and a lizard, though she has dreams of owning chickens one-day!

Can You Spot the Leopard Cub in This Photo?