10 Types of Plecos That Stay Small (with Pictures) 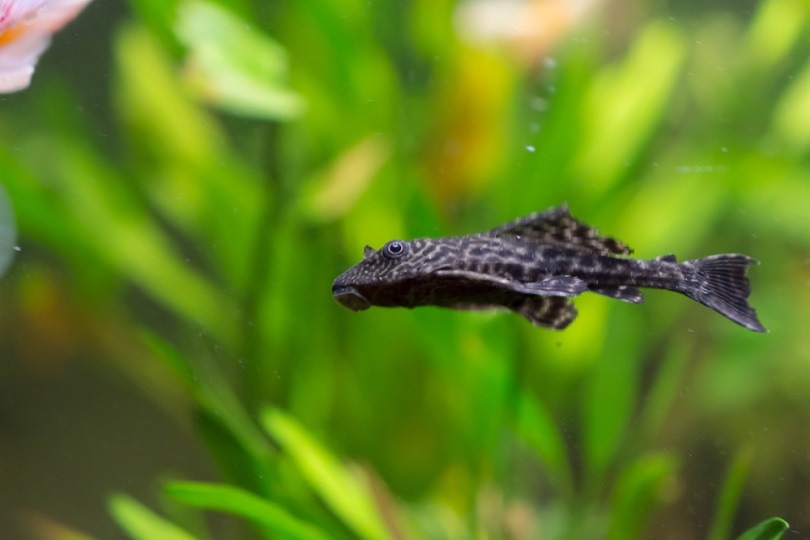 Plecos are great fish to have in your aquarium. They help keep the environment clean by eating much of the material that falls to the tank floor. They also keep mostly to themselves, so few fish mind having them in the tank. However, many plecos can get quite large, with some growing to a length of a foot or more. If you have a 10 or 20-gallon tank, some varieties of pleco fish will quickly die because the habitat is too small. As it can be difficult to sort through all of the breeds to find one suitable for your aquarium, we’ve created a list of 10 species of pleco fish that you can put in a small tank. Most species don’t get more than a few inches long but are still attractive, colorful, and an excellent tool for keeping your tank clean.

The Gold Spot Dwarf Pleco is the perfect choice for a smaller 10 or 15-gallon tank. It usually only grows to about 2 inches. It eats algae, biofilm, algae wafer, and vegetables and will help to keep your tank clean. It’s a calm and peaceful fish that likes to hide among the plants or bury itself in the substrate. It’s one of the few plecos that enjoy living in groups, and most experts recommend keeping 3 in a 10-gallon tank.

Despite looking completely different, many Pitbull Plecos sold in pet stores are Gold Spot Dwarf Plecos with an incorrect label. Since these two fish are quite different, we recommend getting familiar with the differences before going shopping. The Pitbull does not have any gold spots and instead has grey markings that are quite different. It’s a little larger, and though it eats algae, it won’t keep your tank as clean as a Gold Spot. It enjoys living in groups, and you should opt for a 15-gallon tank for up to three Pitbull Plecos if you like this breed.

The Dwarf Snowball Pleco is a unique fish that has a black with white polka-dot appearance. It grows to about 2.4 inches long and only requires a 10-gallon tank. It’s a carnivorous pleco that will scavenge the bottom at night, looking for leftover food from other fish, but it can also go after shrimplets if you have them in the tank. It likes warm water with plenty of movement.

The Angelicus Pleco is another polka dot fish, but the dots on this fish are very small. This pleco usually grows to a little over 3 inches long and is best suited for a tank size of at least 20 gallons. It can be aggressive toward other fish and prefers meat to algae. It likes a lot of current and plenty of driftwood to chew on and to hide behind.

The Clown Pleco is very popular among people with smaller aquariums because it only requires a 10-gallon tank. It doesn’t eat many types of algae but will continuously chew on driftwood. It’s not very active and won’t get in the way of your other fish. Since it chews so much wood, it can create sawdust poop, and you may need a filter to remove the particles from the water.

The Zebra Pleco prefers to spend its time hiding and does not forage much, so it will not require too much tank space. It grows to a little over 3 inches tall, and it prefers a sandy substrate with moving water. It will require a high-water temperature to live a long life and eat a primarily carnivorous diet. The Zebra Pleco is one of the most popular fish in this category, but it’s also one of the most expensive.

The Queen Arabesque Pleco is an attractive fish with a dark body and light-colored stripes. It grows to about 3.5 inches and prefers a tank of at least 15 gallons. It doesn’t like to be in the tank with fast swimmers and eats a carnivorous diet. It’s a peaceful fish that will often let other fish have food it could have defended. It likes to have a cave to hide in and driftwood to chew.

There are several varieties of the Bristlenose Pleco, and they are all instantly recognizable by their small hairs that make it look almost like it has a beard. It’s a peaceful pleco, but it eats a lot and makes a big mess in the tank. Some varieties require water stained with the tannins of driftwood and are best for experienced owners who know how to create such an environment. However, their unique appearance can make them worth the trouble for some owners.

The Leopard Frog Pleco is one of the largest plecos that can still fit into a 10-gallon tank. It’s also one of the most attractive, with alternating yellow and black stripes. It requires warm, soft water and is susceptible to disease if the water temperature drops, so we recommend purchasing a small but reliable heater.

The Rubber Lipped Pleco is one of the largest places on this list and will require a tank size of about 20 gallons. It’s one of the most efficient algae eaters and will quickly clean your tank of algae other plecos would leave behind. It’s peaceful and will not interfere with the activity of any other fish in your tank, and since it doesn’t require any special care, it’s a good choice for a child or beginner.

We hope you have enjoyed reading over these different varieties of pleco and found the one you like best. If we have helped you find the next addition to your aquarium, please share this guide to the 10 types of Plecos that stay small on Facebook and Twitter.