10 Types of Iguanas: An Overview (With Pictures) 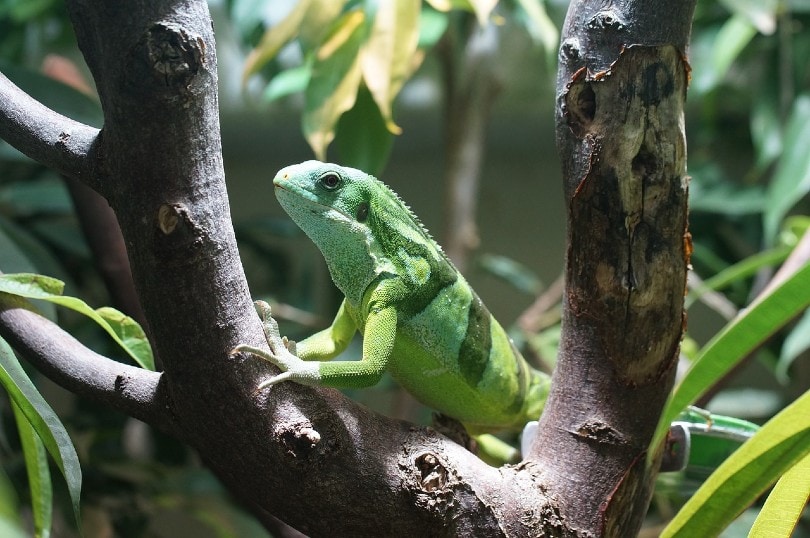 Iguanas are herbivorous lizards native to tropical areas of North, Central, and South America, and the Caribbean. These intelligent and beautiful creatures come in a variety of shapes and colors and can range in size from a few inches to over six feet in length.

Iguanas live on land, in rocks, and trees. They have a dewlap and a stripe of elongated scales running from the middle of their necks down to their tails. Iguanas use their tails for balance when they climb and for self-defense. When an iguana feels threatened, it will distract and bewilder a predator or other threat by thrashing its tail.

One of the most interesting things about iguanas is that their muscles essentially become paralyzed and they fall into a state of hibernation when the temperature drops below 40 degrees Fahrenheit. This is a rather rare occurrence in hot tropical climates like what’s common in Central America but can happen in locations like southern Florida where they’ve been introduced by humans.

There are dozens of different species of iguanas. Here are 10 types of iguanas including a few that are endangered.

The Green Iguana is the most common species that can grow to five to seven feet long. These iguanas are often kept as pets. If you’re thinking of getting a Green Iguana, you must provide it with a large cage, high temperatures, and humidity.

As herbivores, Green Iguanas only eat greens, flowers, vegetables, and fruits. While it is native to Brazil and Paraguay, the Green Iguana is also found as far north as Mexico. There are even some feral populations of Green Iguanas living in South Florida, Hawaii, the U.S. Virgin Islands, and the Rio Grande Valley of Texas. As you may have guessed, Green Iguanas are green and often have blotches and stripes of other colors including orange, blue, black, and white. These iguanas also have spines along their back, large dewlaps under their chins, and prominent jaws.

The Cuban Rock Iguana lives in colonies all across Cuba and nearby islands. This is a ground-dwelling iguana that grows to lengths of around five feet and can live for 50 years or more.This iguana is easy to tame but it requires a large outdoor enclosure with basking areas. This lizard has to be handled carefully because it has very powerful jaws that can do some great damage to fingers or toes.

Native to arid portions of Mexico, California, and Arizona, the Desert Iguana lives a different lifestyle than its green relatives that spend their days clinging to trees in tropical areas. This lizard that only grows to lengths under two feet, spends most of its time on the desert floor and adjoining rocks.

These lizards are colored white and dark gray with reddish-brown tones. This type of iguana is difficult to keep as a pet because it can flatly refuse to eat, even if offered something irresistible like edible flowers.

The Rhinoceros Iguana gets its name from the horn-like protrusion growing on the snouts of males. These iguanas are a species many people want to own due to their magnificent appearance.

Native to Haiti and the Domincan Republic, Rhinoceros Iguanas prefer dry rocky forested areas along coastlines. These iguanas have drab coloring in grayish brown to black colors so they can easily hide from predators in their native environment.

Rhinoceros Iguanas can be extremely aggressive, although their temperaments vary between individuals. These iguanas can live for longer than 20 years.

Endemic to Mexico and Guatemala, Northeastern Spiny Tail Iguanas have distinctive keeled scales on their long tails. These lizards are excellent climbers and prefer living in a rocky habitat with many crevices to hide in, rocks to bask on, and nearby trees to climb.These fast-moving iguanas are primarily herbivorous, eating fruit, flowers, leaves, and stems. They will also eat smaller animals, eggs, and anthropods if given the opportunity.

Named for the keeled scales covering their long tails, Northeastern Spiny Tail Iguanas can grow up to lengths over three feet long. These iguanas are nervous, flighty, and defensive and they won’t think twice about biting.
If kept as pets, Northeastern Spiny Tail Iguanas should live in large vertical enclosures so they have plenty of room to climb.

Native to the arid western portions of North America, Chuckwallas prefer living among rocks. When frightened, they will seek shelter among the rocks and can wedge themselves into tight spaces and fill their bodies with air. This makes it very difficult for a predator to access and extract these lizards.

Chuckwallas have stocky bodies and can reach lengths of about 18 inches. They can be kept in captivity by experienced keepers as long as they’re provided with a rocky habitat with plenty of room. These are gray iguanas with lighter-colored blotches all over their bodies.

Chuckwallas are omnivorous which means they can eat a varied diet of vegetables, seeds, and insects. They can be fed a strictly herbivorous diet if kept as pets.

This type of iguana is a real beauty with its stunning bright green color, crested spines, and long tail. This is an endangered species found exclusively on the Fiji Islands. While the females are solid-colored, the males have blue or green stripes.

These arboreal lizards spend most of their time in trees. That’s why they are typically found in areas with high vegetation and trees at least 20 feet tall. These iguanas can grow to 7.5 inches in length.Fiji Banded Iguanas are excellent swimmers that prefer living in wet forests, spending most of their time foraging for leaves, flowers, and fruit. On the rare occasion, a Fiji Banded Iguana will eat insects. These beautiful iguanas live up to 15 years in the wild and 25 years if raised in zoos.

As the only type of Iguana that’s found in the Galapagos, the Marine Iguana is an endangered species. This iguana is the world’s only oceangoing lizard that can be seen resting on rocky shores.

Growing up to six feet long, Marine Iguanas are striking creatures with thickset bodies and short, robust legs. The adults have a row of spines extending from the neck to the tail. Marine Iguanas can be black or gray with lighter-colored dorsal stripes. The adult males can become brighter in color when breeding.

These marine reptiles forage for algae in the sea, which makes up most of their diet. Marine Iguanas can dive deep to find algae. These iguanas live in colonies on rocky shores where they bask in the sun after swimming in the cold water.

The Jamaican Iguana is Jamaica’s largest native animal species. This lizard is critically endangered as it faces many threats including invasive species and a loss of habitat.

Growing to a length of two feet, this iguana is a dark gray, blue, or green-colored reptile with a long tail and triangular stripes down the length of its back.

While Jamaican Iguanas used to be found on many southern coastlines in Jamaica, today they’re only found in a location known as Hellshire Hills. This is a dry forested area full of a variety of rocks including limestone.

With its long toes and sharp claws, a Jamaican Iguana can climb high into trees to eat leaves, fruit, and flowers. These mainly herbivorous iguanas will also eat insects, snails, and other small animals when available.

Bahamian Rock Iguanas are among the most endangered lizards in the world. These brownish pink iguanas with the distinctive thick-ringed tail can grow up to three feet in length and can be found on various islands throughout the Bahamas. This iguana is important to the people of the Bahamas and is linked to the country’s number one industry which is tourism. Many people visit the Bahamas for both its beauty and to see the Rock Iguanas in their native environment. Bahamian Rock Iguanas are herbivorous, consuming leaves, flowers, berries, and fruits. These lizards have long straight tails and short powerful limbs which helps them climb trees and rock formations. These impressive-looking iguanas are surprisingly good saltwater swimmers.