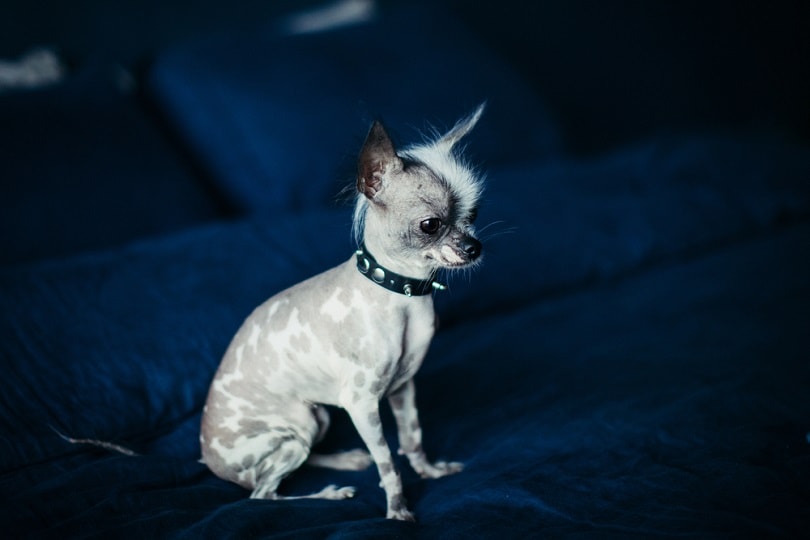 One of the most defining and endearing traits of any dog breed is their coat. From curly Poodles to fluffy Pomeranians, a dog’s coat is a large part of what makes them so adorable. Their coats, however, can also be the source of one of the most difficult aspects of owning a dog: shedding. Even if you don’t have allergies, the constant shedding from both long and short-haired dogs is a never-ending chore.

Enter hairless dogs. Not only do these dogs take away the chore of grooming and shedding, but they are also just as loving and loyal as any other breed. They are truly uniquely adorable! Check out this list of 10 unique hairless dog breeds.

Also known as the “African Hairless Dog,” Abyssinian Sand Terrier is an ancient and rare breed of hairless dog. In fact, they are so rare that there is doubt whether any still even exist today. They are medium-sized dogs with tons of energy and are hardy animals that can handle the harsh environment of Western Africa. Most Sand Terriers have a small amount of hair on their head and tails, although a few examples are completely hairless.

One of the most well-known hairless dog breeds and the only indigenous hairless breed developed in the U.S., the American Hairless Terrier is a native of Louisiana and is thought to have descended from the Rat Terrier. Some of these dogs have short, almost invisible coats, while others are completely hairless. They are, like most Terrier breeds, full of energy and love nothing more than playing, digging, and chasing, and they make great family pets.

The Argentine Pila is famous for their soft, hairless skin, and they come in three different size categories, from small to fairly large. They are loyal animals that are highly adaptable and hardy —  except when in cold climates, of course! They are predominantly completely hairless, although a few varieties have small amounts of hair on their tails and heads.

Despite their name, the Chinese Crested did not originate in China, but they evolved in Africa and Mexico and were developed into the modern breed in China. The Crested comes in two varieties: the hairless, which has hair only on their head, tail, and feet, and the powderpuff, which has a full coat. Their main claim to fame is as the winners of countless Ugliest Dog competitions, although beauty is in the eye of the beholder, right?

Considered one of the rarest hairless dog breeds, the Ecuadorian Hairless Dog is completely hairless except for a tiny patch on the very top of their head. Another unique feature in these dogs is their lack of premolar teeth and their short tail, further adding to their strange appearance. They are descendants of the Peruvian Inca Orchid and are not considered a separate breed, but as a variation of the Peruvian.

The same breed as a regular Chihuahua but with a distinct lack of hair, the Hairless Chihuahua has a rare genetic defect that causes them to be hairless. They are prone to a few skin issues but are just like regular Chihuahuas in every other way! They have massive personalities inside their pint-sized frame, bond strongly with their owners, and are bundles of fun that are a joy to have around. Just be sure to buy them a warm jersey for winter!

A rare hairless breed originating in Bolivia, the Hairless Khala is not completely hairless but has a comical tuft of hair on their head and occasionally on their tail and feet. There are two different varieties of the Khala: the “Medio,” which is the smaller, short-legged type, and the “Grande,” which is the bigger, long-legged variety. They are agile, athletic dogs that have a great deal of energy and bond strongly with their human companions.

The Jonangi is a hairless breed that originated in Pakistan and India and is mainly used in hunting and herding. These dogs are usually not truly without hair; instead, they have an almost invisible and very short coat, although some are known to be totally hairless. The breed is rare and nearly faced extinction, but a few dedicated breeders are bringing the Jonangi back from the brink. They are loyal animals that attach themselves strongly to one owner and make great family pets.

Also commonly known as the Peruvian Hairless, the Peruvian Inca Orchid is an ancient breed that can be coated or hairless and comes in three distinct sizes. They are agile, lively animals that are expert hunters and are essentially sighthounds, similar to Greyhounds or Whippets. They were commonly kept as companion animals and are loving and loyal dogs that make wonderful family pets, provided that they get the right amount of exercise, of which these energetic pooches need a fair amount.

The Xoloitzcuintli, better known as the Mexican Hairless Dog, is an ancient breed dating back thousands of years to the Aztecs. They are powerful, well-muscled dogs that come in three different sizes, all of which can have either no hair or very short coats with a characteristic mohawk tuft sitting on top of their heads. They are calm and even-tempered dogs that are not overly energetic and don’t require excessive exercise, although they do have a fairly strong prey drive. They make wonderful family companions and alert watchdogs.